In 1905 my father filed on a homestead in Slope County, North Dakota. He had been a teacher in Atwater and was elected County Superintendent of Kandiyohi County in 1890. At the end of four terms he left the teaching profession and after several business ventures he settled on the homestead years. He had an appointment as a postmaster at Rainy Butte, North Dakota – kept a store there. A rural mail carrier brought the mail from New England Post Office. It was there that Marvin and I met and later were married. The Covell family had their living from the store. The salary for the Postmaster was the amount of the canceled stamps. 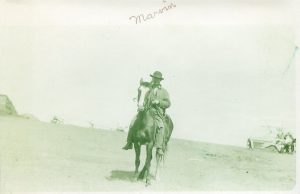 The first time I saw Marvin he had ridden his pony following a coyote up the slopes of the West Rainy Butte and when it tired he killed it with his rein straps. The coyote was hanging on the side of his saddle. He frequently came to the store to get his mail. He took me riding in a one-seated buggy. Our first ride was on the 6th of July in 1913. My father always bought and sold Fourth of July supplies. Whatever was not sold, he and we children could use to celebrate the Fourth – on the 6th of July. Marvin came to watch and after it was over we went for a ride. It was a skittish horse, so he would put me in the seat first and have a firm grip on the lines and then jump in fast because Lucy (the horse) would start running at once. 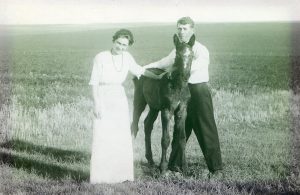 Marvin and I were married September 12, 1914. He died February 26, 1973, at our home in Atwater. We were married in front of our home in North Dakota. It was also Grandpa Hall’s birthday – 76th. Rev. John Nickerson was the minister from the Pierce Church.

We drove – horse and buggy – down or up to my parents’ home 1 ½ miles North – and all the relatives and guests with us in their several rigs for the wedding supper. We were both 24 years old.

Corinna Jane was born May 18th, 1916, and Myron Covell May 26th, 1918. Dr. Sarchet of New England drove out with the horse and buggy both times – about 20 miles. Mrs. Sarchet came along and probably assisted. Dr. took the baby with forceps as I was unconscious, when Corinna was born.

The next day the Stafford girls came to see Corinna. Marvin introduced her to Aunts Laura, Elsie, Nellie, and Pearl. They giggled, as they always did when Marvin talked to them.

Should have said Marvin put an old-fashioned lantern on a post in front of the house to help guide the Dr. to the right house. It was night on a hill.

Myron was born naturally except that he took his own time and was reluctant to breathe as a result, and I heard the Dr. slap his seat and say, “Come on, sir,” and instead of a good loud cry he only managed to sniffle a little. He was a beautiful child.

Marvin said to the Dr., “We aren’t going to have any more, and Dr. said, “Well not for awhile anyhow.”

We lived in North Dakota for about five years and then moved to Atwater the fall of 1919 – drove down in a Model T Ford. It was cold and stormy. Corinna sat bundled up in my mother’s old fur-lined coat and sang and talked to herself all the way. Myron got sick on the way down, and we stayed in a hotel somewhere. We called the Dr., and he told us to give Myron a prescription of medicine he left, all night. He warned us to give it every hour if we wanted to get him well. We did. We stayed at the Covell house where we live now till the next year and then we went to live on the Lundquist farm just West of Atwater. Both my parents died in 1922, and we came here to live. The Covell boys said, “Move into this house,” and Marvin decided for me by going over to the Lundquist farm to get Corinna’s and Myron’s trundle beds and bring them here where we have lived ever since. That now in 1973 is 51 years ago. Marvin worked at Strong Motor about 10 years and drove the school bus until he was 60 years old. Then he worked at Nelson Implement and Buer Implement and a short time for Charley Thompson Grocery till he retired. He spent his leisure hours fishing at Diamond Lake. Vernon Peterson fished with him – also Mr. Metag and others.

My great grandfather Peter O. Hall was born in Smolend, Sweden September 12, 1838, and emigrated to the United States at the age of 17 in 1855. He died in 1930 when I was 6 years old, so I knew and loved him at a young age. He was a hero in my little town of Atwater, Minnesota, and his home was one block away from ours. He had served 3 years in the Civil War from 1861 to 1864 in the First Minnesota Regiment, Company B. He was a member of the Last Man’s Club and was the second to the last of its members in Minnesota to die.

He married my great grandmother, Mary Ann Glader, born in Sweden on November 22, 1841, in Center City Minnesota on November 22, 1866. Mary Ann emigrated to the United States in 1853 at age 12 with her parents and lived on a farm with them near Center City where Peter also had bought a farm after the War. They were neighbors. My great grandmother died in 1920. I never knew her.

Atwater, Minnesota: 1934-1935 by Harriet (Stafford) Dukelow is licensed under a Creative Commons Attribution 4.0 International License, except where otherwise noted.