The CLIC Board wrote the first draft of an ongoing communications fact sheet (FAQ) to keep the membership informed of the Board’s progress on strategic planning for CLIC’s future. Dukelow and Asch attended ALA Midwinter in Seattle and met with representatives from Ex Libris and OCLC to discuss library system licensing options for CLIC libraries when CLIC’s Alma/Primo license expires in 2021.

February 2019.  The CLIC Board reviewed scenarios to determine whether to renew the current six-institution shared-system license with Ex Libris expiring June 2021. The Board planned to make a final decision on whether or not to renew the shared license no later than December 2019.

The CLIC Board sent out the first issue of the communications FAQ on February 4. The CLIC Board began reviewing options for staffing CLIC after Dukelow’s departure at the end of the fiscal year.

March 2019.  The Executive Committee posted a position for an Interim Executive Assistant to the Board.

The CLIC Board sent out the second issue of the FAQ on March 14.

April 2019.  CLIC’s annual conference, “Artificial Intelligence, Creative Design, and Libraries,” was held on April 23 at the University of St. Thomas. Presenters included Nicole Coleman of Stanford, Rich Belanger of Proquest, Lizzy Baus from Minitex, and Brad Hokanson from the University of Minnesota. CLIC celebrated turning fifty years old at the annual conference with a cake and historic photo slide show. 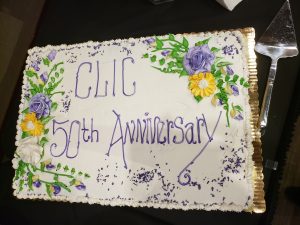 The CLIC Board sent out a survey to gather staff input on options for CLIC’s future.

CLIC libraries decided not to migrate from ILLiad to Tipasa.

May 2019.  The Board interviewed a candidate for the position of Interim Executive Assistant to the Board.

June 2019.  The Board hired Carla Urban as part-time Interim for a six-month contract.