CLICnet III vendor evaluation teams were set up. A kickoff event was held on January 28th. Semi finalists were named in early March and invited to provide system demonstrations.

OCLC bibliographic loads for Bethel Seminary and Northwestern College were being completed.

February 23, 2000.  The Board directed the Serials Management Task Force to begin working on collection development issues.

Long term scenarios for the CLIC budget were presented by Executive Director Olson. 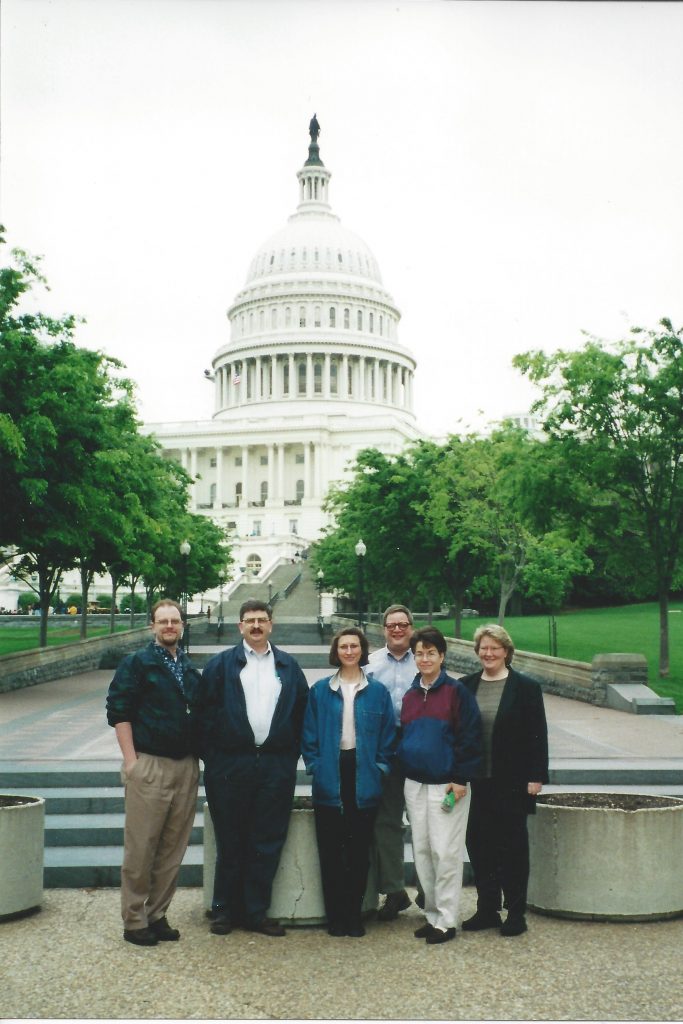 Prior to the selection of Innovative Interfaces’ Millennium, the CLICnet III Site Visit Team travelled to see three systems in actual use by libraries in Washington, DC, Baltimore, and Philadelphia in the Spring of 2000. The trip was intense and by the time the team’s work and travel were done for the day, often the only restaurant still open was a 24-hour pancake house. Left to right: Nathan Farley (Northwestern), Clem Guthro (Macalester), Karen Mateer (Augsburg), Steve Waage (CLIC), Amy Shaw (St. Kate’s), Kate Borowske (Hamline)

The Board approved the purchase of Remote Patron Authentication (RPA) Product from Epixtech.

Waage’s efforts on the MnLINK Gateway and Interlibrary Loan Project were recognized by Olson.

At this time there was a moratorium on consideration of requests by institutions seeking to join CLIC.

Due to problems with the Epixtech RPA product the Board voted to return the software until it was further developed.

CLIC pursued a grant from the Foundation of Institutes for Higher Education in order to evaluate serial collections and develop interlibrary loan via Ariel.

May 5, 2000.  The Site Visit Team report recommended Innovative Interfaces, Inc. as the vendor for CLICnet III to CLIC’s Steering Committee.

Meeting officially opened to the public. Olson (CLIC) was authorized to create a public statement concerning the selection of the vendor.

Board approved the creation of an account through MINITEX for the NetLibrary product.

A document regarding the fostering of the Hill/CLIC relationship was distributed by Offermann (MNC).

Group was responsible for planning the conversion, migration, and implementation of CLICnet into the Innovative Interfaces (III) software/hardware.

The new By-Laws provision that Proxy Statements naming alternates with voting privilege to the Board of Directors must be filed with the CLIC office annually became official practice.

Because of his impending retirement Glenn Offermann’s resignation from the Board as a director was accepted and he was elected Director Emeritus. Charlotte Knoche (MNC) was appointed Interim Library Director at Concordia and became Concordia’s representative on the Board.

August 23, 2000.  The Board approved the purchase of a separate T-I internet telecommunications line and security firewall to be installed at Macalester College for connections to CLICnet services.

Annual evaluation of the Executive Director using the appropriate form takes place on the anniversary of hire date. The past Board President is responsible for this task.

The Board held an issues discussion concerning e-books and other electronic resources. It was agreed to create a Strategic Planning for Electronic Resources Task Force.

Olson (CLIC) announced that he was running for Minnesota Library Association President.

October 25, 2000.  The Board accepted the final draft of the III Contract.
T-1 Line installed and functioning.

November 22, 2000.  The Board approved the Executive Board Job Descriptions which were placed in the Board of Directors’ Manual.

CLIC dues remained the same for FY2001-2002 but alternative methods/formulas would be studied during the year. A Dues Task Force was created.

The Hill Library was re-examining its structure and relationships at this time.

Membership in CLIC issues still remained to be addressed. The Board agreed to have a Special Board Meeting on January 24, 2001, to discuss issues concerning membership and dues formula.