February 18, 1980.  Consultant Schilling (MNA) had submitted a summary of her January-February activities in regard to the COM catalog including a list of future tasks. The Board authorized the purchase of an updated catalog for summer, 1980, to include all OCLC records January, 1979 to June, 1980 and reflecting 20,000 withdrawals. Schilling’s final report was accepted in March. 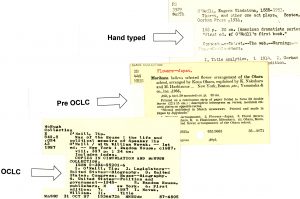 March, 1980.  In order to clarify insurance issues CLIC purchased the courier vehicle, a Chevette, for $3,300 from Hill Library.

The Board encouraged audio-visual directors at their institutions to formally organize, meet regularly, and communicate with the Board. CLIC supported the development of a joint film catalog. Money was provided for film maintenance and repair. 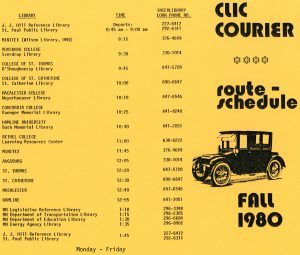 September 25, 1980.  Purchase of “Most Used Films” from a list compiled by the audio-visual directors was approved. The use of CLIC funds for the purchase of materials represented a new approach in cooperative development.

The COM catalog reached capacity in October. Planning for an online catalog was undertaken in earnest. It was agreed that CLIC should proceed “with deliberate speed” to search for money to support an online catalog.

November 3, 1980.  Schilling (MNA) reported on her findings in regard to the updated COM. It was an unsatisfactory product and should not be accepted or paid for as is. Necessary fixes were specified to Brodart by letter. A replacement was received and accepted in December.

The Board established a $30,000 endowment fund. Endowment income may be used for:

An investment committee will monitor the fund.