January, 1990.  Board members worked on Title II College Library Technology and Cooperation Grant proposal ($125,000) submitted jointly by Carleton College, St. John’s/St. Ben’s and CLIC. Grant to be used to load bibliographic records from the colleges onto a separate database supported by MSUS/PALS system. It could serve as backup for CLICnet.

CLICnet failed the Final Acceptance Test. Carlyle must pass the test on or before April 26, 1990. Preparations for another test moved forward.

April, 1990.  The Board retained Robert Walton as a consultant to advise CLIC concerning automation and governance issues. However, it was Walton’s partner, Frank Bridge, who finally did the work. 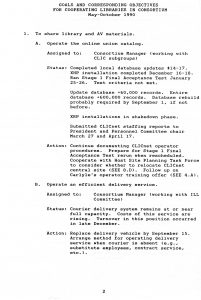 June, 1990.  After back surgery, Susan Hillard resigned as CLIC Bookkeeper at the end of June. Temporary assistance was then provided in the CLIC office by Jamie Metz.

September 12, 1990.  The Board Planning Committee worked on contingency plans and awaited Consultant Bridge’s report.
According to CLIC’s downtime reports the CLICnet system was up 88% of the time from 12/1/1989 to 8/31/1990.

November 13, 1990.  The Cataloging/Database Management Committee issued a memo to the Board concerning the processing of a CLICnet rebuild. The rebuild should have been completed in September, 1990, but there were significant problems and it had not yet been successfully completed. The memo outlined the history, difficulties and consequences of the rebuild problems.

November 28, 1990.  At this meeting The Planning Committee’s report was distributed and the motion proposed in it discussed. The Overall CLIC Assumptions, Goals and Objectives document as amended was referenced in the final approved motion:
“The Board of directors of the Cooperating Libraries In Consortium reaffirms the objectives of the CLIC Library Automation Project as defined in the document entitled, “Overall CLIC Assumptions, Goals and Objectives and authorizes the Planning Committee to identify a vendor, other than Carlyle, that is capable of providing a system that will meet the objectives of the Project.”

In effect this was the beginning of a deliberate search for a new vendor. The Planning Committee had a proposed schedule for evaluating alternative automation vendors.