January 16, 1974.  Beth Kelly’s plan to resign as CLIC Coordinator in July was announced. Search for a new coordinator began. 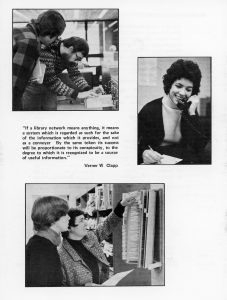 Dr. Massman of Hill Library noted two important decisions by the Hill Board: The Hill Library will remain in its present location and the library will investigate the computerization of its union catalog. The CLIC Board passed a motion of enthusiasm and cooperation for this project.

At this time in support of one of CLIC’s major goals there continued to be groups working on identifying library resources and purchasing materials and media that strongly support programs of the members. Grant monies were spent on films. The reference librarians met and produced lists of strengths in collections and special reference materials. Paper lists of holdings helped provide better reference service because librarians knew where to pursue answers to questions within the consortium.

March 14, 1974.  The Board formally endorsed the Union Catalog Conversion Project and the development of a grant proposal to fund it.

March 27, 1974.  The Ohio College Library Center (OCLC) enters CLIC’s horizon via a report from Daniel Gore (MAC). Plans were proposed to confer with Frederick Kilgour, of OCLC about catalog conversion. The Board agreed that the Union Catalog Conversion Project would move forward if the Board arrived at acceptable cost figures, the Kilgour consultation was positive and outside funding was received.

April, 1974.  Although many public services librarians favored a book catalog rather than a microform one the Board for a variety of reasons chose to pursue a microform version and focused on that format in grant proposals.

July, 1974.  Andrea Honebrink was hired as the new CLIC Coordinator.

September 18. 1974. Jack King (MNH) Board president, called a special board meeting to discuss CLIC’s participation in the MECC (Minnesota Educational Computing Consortium) –MARC Cataloging Program. At the meeting (9/19) the Board voted to present a resolution to the MECC Task Force on Data Processing requesting participation in the MARC card project.

October, 1974.  It was agreed that acquisitions librarians would meet on a regular basis. Thus sharing of local practices and needs would lead to better use of local funds and CLIC cooperative purchases.