The CLIC Board charged the Collection Development COI to develop criteria for evaluating, selecting, and funding ebook collections shared by all CLIC libraries.

CLIC ceased its group subscription to RDA Toolkit because member libraries were able to obtain higher discounts via Minitex.

March 2015.   The Marketing Task Force began a pilot project to promote reference and resource-sharing services at member libraries. For the first step in the marketing cycle, they gathered data via focus groups, “Question of the Week,” and a CLIC/ILL analogy contest.

Dukelow presented a licensing webinar for Minitex and also presented on licensing at the PALS Acquisitions Work Day.

April 2015.  The Implementation Team members worked with ProQuest to perform “Summon Content Analysis” to determine the percentage of each library’s journals that are findable via Summon. 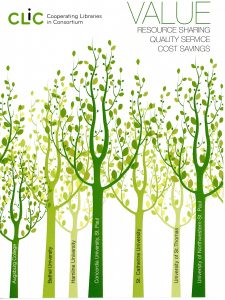 The new CLIC Value brochure was printed and copies of both the print and PDF versions were distributed to the directors to share with their Administrations.

Dukelow attended the ICOLC conference in Albany, NY, and brought back information on shared staff arrangements and other future directions for library consortia.

May 2015.  The Board officially approved CLIC’s new Articles of Incorporation, Bylaws, and Policies.

CLIC renewed the CONTENTdm group subscription at the 1000GB level (an increase from the 200GB level).

At the request of the Implementation Committee, the CLIC Board created a new Summon Admin Committee to handle ongoing support of Summon. The Board also transferred support of Intota KB/ERM to the Electronic Resources Committee.

The Marketing Task Force announced two winners of the CLIC/ILL Analogy Contest, Lauren Gannon and Tavia Buysse.  Lauren Gannon of Bethel won for Who Wants to Be a Millionaire. Her submission read:

Tavia Buysse of Hamline won for Baking Cookies, which read:

“If you’re baking cookies and are missing an ingredient, CLIC is like going over to your neighbor’s house and asking them for a cup of sugar. ILL is like getting into your car and going to the grocery store. It takes longer, but you’ll still get the item you need.”

The Board welcomed new Board member, Mary Hollerich, Library Director at Augsburg College.

Valerie Horton of Minitex and Jason Roy of UofM Libraries met with the CLIC Digitization Committee on August 24 to encourage adding digital collections from CLIC’s CONTENTdm to the Digital Public Library of America (DPLA). CLIC library directors were asked to sign the DPLA Data Exchange agreement to facilitate access to CLIC collections via DPLA.

September 2015.  The Implementation Team expressed concerns with Intota development, and CLIC Board President Dan Gjelten sent a letter to ProQuest outlining CLIC’s concerns. The Board and Implementation Team met with ProQuest leaders via webinars and conference calls to discuss.

October 2015.  The CLIC Board adopted a new membership policy.

Seven CLIC member library staff attended ProQuest’s User Group Summit in Chicago on October 7-9. The main point of interest at the Summit was ProQuest’s announcement to buy Ex Libris. The CLIC Board met with the Implementation Team on October 28 to discuss the ramifications of the ProQuest purchase of Ex Libris on renegotiation of our Intota license.

On October 28, CLIC hosted a webinar for member library catalogers on LC’s Music Medium of Performance and Genre Vocabularies.

The Marketing Task Force completed their pilot project using posters to promote reference services, and the CLIC Board approved creation of a new Marketing COI to begin in January 2016.

The Executive Committee and other members of the CLIC Board met with ProQuest’s Jane Burke on to discuss the terms for an addendum to the Intota license and arranged to meet again in January after ProQuest’s Ex Libris purchase is finalized. One option may be for CLIC to be a development partner.

Terry Metz and Ruth Dukelow attended the Minitex Policy Advisory Committee (MPAC) meeting and presented a report on our implementation of Intota v.1.