Glenn Offermann (MNC), Board president surveyed members’ preference for a dinner or a picnic as CLIC’s annual celebratory event. With no clearly stated preference Concordia as host library decided to host a buffet dinner (5/21/1976).

April 12, 1976.  Andrea Honebrink’s resignation as coordinator as of June 30, 1976, was accepted and a search for a new coordinator was authorized.

Objectives for 1976-77 were adopted and Task Forces for their achievement established.

1.  Achievement of a machine-readable CLIC union catalog
2.  Critical evaluation of the status of cooperative collection development in the consortium.
3.  Critical examination of the interlibrary loan system, designed to improve its functioning under ever-increasing volume.
4.  Development of a program for automating circulation control.
5.  Cooperative development of library instructional/orientation programs.

No minutes were taken for the March 29th meeting discussing OCLC as a potential element in CLIC’s conversion project. The April board minutes include discussion of the role OCLC might play.

May, 12, 1976.  Glenn Offermann (MNC) gave a presentation on “State of the Consortium”.(See Appendix 3) He noted the increasing influence of outside forces on CLIC’s activities and listed activities that work well at the CLIC level and should be facilitated and continued. Among them the catalog conversion project, increased av material utilization, and cooperative acquisitions programs.

Once again the Union Catalog Conversion Project was endorsed. The expectation was for an author, subject, title COM (Computer on Microform) catalog which would provide direct patron access to CLIC holdings. It would be produced in multiple copies, facilitate other library activities such as cooperative acquisitions, and promote increased exchange of materials.

A new Task Force on Interlibrary Loan was established according to the 1976-77 objectives. By the next board meeting the group had developed guidelines for CLIC requests and recommendations for delivery service.

June 17. 1976.  The Board met with representatives from Northwest Area Foundation and Brodart to discuss the catalog conversion project and the production of the COM catalog.

June 29, 1976.  Ingrid Forde was selected as CLIC Coordinator and a permanent CLIC office at the Hill Library was decided upon.

September, 22, 1976.  Board meetings resumed. Forde was directed to implement Interlibrary Loan Task Force recommendations. At this time there is no back-up for the courier. Board members were assigned to establish Task Forces to implement the objectives for the year. Objective 1 was split into two parts with a task force to cover achieving a machine readable catalog and the second with catalog implementation in member libraries. In order to increase informal communication the Board decided to meet for lunch prior to the business meeting.

October 21, 1976.  St Catherine was the first site to host the Board lunch and meeting. Reports of catalogers’ meetings indicate work being done on the catalog conversion project and its implementation. In preparation for the time when the Union Catalog at Hill Library would no longer exist new policies would be needed. The Interlibrary Loan Task Force was directed to prepare an analysis of needs and ways to meet them. 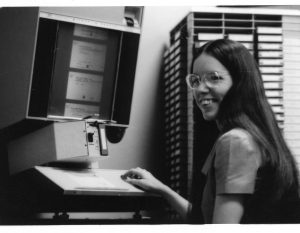 December 1, 1976.  Brodart will provide a microfilm version of a representative catalog based on available MARC records in January, 1977. The version produced in summer, 1977, will represent holdings in the CLIC Union Catalog. The conversion project should be ready for completion January-February, 1978. Suderman (MNK) was the authorized negotiator for purchase of ROM readers (approximately 40) for the microfilm catalog. Grant monies were sought to support their purchase.

December 1, 1976.  The Board passed a motion that the CLIC microform union catalog be in divided format arranged by author, subject, title order.