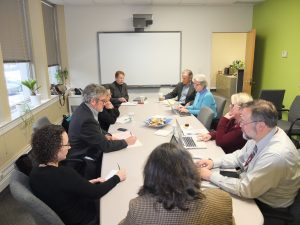 January 2016.  The Executive Committee and other members of the CLIC Board met with ProQuest’s Jane Burke on January 22 to discuss the terms for an addendum to the Intota license and to learn more about ProQuest’s plan for integrating Ex Libris Alma components into Intota. ProQuest assigned Heidi Thompson to meet regularly via webinar with the Implementation Team to provide information on development.

The new Summon Admin Committee and the new Marketing COI held their initial meetings in January. Dukelow suggested that the Board consider creation of an Assessment COI as well. The Board approved discontinuation of the OPAC Committee.

The Board approved the Guidelines for Consortial Ebooks Purchasing prepared by the Collection Development Committee and authorized the Committee to proceed with purchasing shared ebook collections.

The Board approved a new Media Lending Policy to take effect on March 1.

Dukelow asked ProQuest for group pricing for SIPX, a service designed to help faculty with digital coursework including copyright compliance. Hamline began a SIPX subscription and rolled it out as a pilot to some departments.

February 2016.  Nine representatives from CLIC attended a special ProQuest event, “Into Alma,” on February 8-10 in Chicago. The event was designed to introduce Intota customers to Ex Libris Alma and to elicit feedback on incorporating the Intota vision into Alma. The CLIC Board began work with the I-Team to determine what decisions needed to be made prior to migrating to Alma in 2017.

March 2016.  The CLIC Board approved the Implementation Team’s recommendations regarding migration to Ex Libris Alma: (1) that CLIC migrate to Alma with the topology of seven Institutions and CLIC as a Network Zone and (2) that CLIC switch to Primo for discovery.

The CLIC Board declined ProQuest’s SIPX group offer because the prices were not affordable. 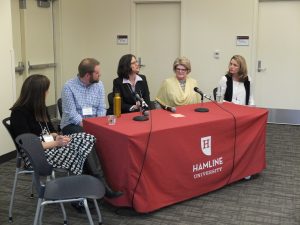 April 2016.  The CLIC Annual Conference, “Designing the Library’s Learning Space – the Architecture of the Library’s Curriculum,” was held on April 12 at Hamline University’s Anderson Center. Lee Van Orsdel of Grand Valley State University, Kelly Miller of the University of Miami, and Frank Sayre of UM presented in the morning session, and Heidi Hansen and Julie Nelson from DIRTT and Renee Hawthorne from Steelcase presented in the afternoon.

Dukelow and Asch met with Minitex staff to explore courier options. The CLIC Board asked the ILL Committee to review twice-a-day delivery vs. once-a-day delivery, including asking Expedited for statistics, and to report to the Board by October.

May 2016.  Steve Waage, Meg Manahan, and Dani Roach attended an Alma migration workshop in Oklahoma City on May 3.  Waage attended the ELUNA conference on May 4-6 and posted summaries of the sessions he attended on Basecamp.

Dukelow reviewed the ProQuest license amendment and sent a list of requests to ProQuest and Ex Libris for license revisions. The license provided for migration to Alma and Primo to be completed by May 31, 2017.

The CLIC Board approved a $500 contribution to the LOEX Conference in 2018.

Dukelow completed her onsite visits to CLIC member libraries and submitted her final report to the Board. The report will be helpful in laying the groundwork for future CLIC strategic planning.

June 2016.  Augsburg submitted a formal letter stating their intention to withdraw from CLIC effective June 30, 2017. Augsburg Library Director Mary Hollerich informed the CLIC Board that Augsburg planned to migrate to OCLC WMS in 2017.

Dukelow requested a revised license from ProQuest and Ex Libris to remove Augsburg and to adjust costs. Dukelow and Asch met with Jane Burke at ALA to finalize the revised license terms. The CLIC Board held a special meeting on June 29 and unanimously approved the revised license to migrate to Alma/Primo by May 31, 2017, subject to development of an equitable formula for allocating the shared system costs beginning in FY17-18 and continuing for the four years of the license.

August 2016.  Steve Waage announced his retirement date of October 31, after 24 years of working for CLIC.

The CLIC Board appointed a Project Lead Team of Emily Asch and Ruth Dukelow (representing the CLIC Board) and Greg Argo and Meg Manahan (representing the Alma Implementation Team) to manage the Alma/Primo migration. The Board appointed a Dues Task Force of Dukelow, Gjelten, McGuire, and Metz. The Board approved combining the Circulation and Reserves Committees into a single Committee.

The Executive Committee met on September 13 to address covering Waage’s work after his retirement in October. The Board contracted with Kathy Cadwallader to do the regular Millennium updates, and Dukelow investigated potential people to do the Millennium extracts for Alma in December/January and April/May. The ASAs took on the responsibility of addressing Millennium support issues, including triage to determine which support requests needed to be turned over to Innovative Support and which could be handled by the ASAs.

Ruth McGuire presented to the Board on the Open Textbook Network. Northwestern was one of the original grant participants in the Network which focused on awareness and adoption of available open textbooks and had recently added creation of open textbooks.

October 2016.  CLIC celebrated Steve Waage’s 24 years at CLIC with a retirement reception at the CLIC Offices on October 14.

The CLIC Board contracted with Sarah Johnston from St. Olaf to do the Millennium extracts for Alma. In the two weeks prior to his retirement, Steve Waage performed the validation extract and sent in six extract files to Ex Libris for their review. Waage created Google Drive folders for each institution’s extracts, so that Sarah Johnston could archive her extracts there as well.

Fitzgerald and Dukelow took on the remainder of Waage’s CLIC office tasks not covered by Cadwallader or the ASAs.

The Implementation Team took a field trip to St. Olaf on October 17 to learn about St. Olaf and Carleton’s recent migration from Millennium to Alma and Primo.

Jade Erickson and Kaylin Creason from the ILL Committee attended the November Board meeting and presented a summary of the findings of the Courier Study. The study showed that there was a significant difference in twice-a-day over once-a-day delivery. The value to students was same day or next day under twice-a-day, with at least a day delay under once-a-day (longer for misrouted items). The study also showed that a library’s time of day impacted speed of delivery, so switching the delivery order occasionally could be beneficial. The Board expressed their appreciation to the ILL and Circulation staff for their work on this project.