CLIC’s Strategic Plan 2003—2005 was drafted at the retreat, the stated mission: CLIC’s mission is to support member libraries in fulfilling their missions when cooperation enhances their ability to do so.”

Focus areas for strategic growth were:

A Board “champion” was designated for each area.

February 26, 2003.  Ken Behringer from MnLINK attended the meeting to discuss the MnLINK Gateway Project and invited CLIC ILL staff to participate in ILL training for the system. 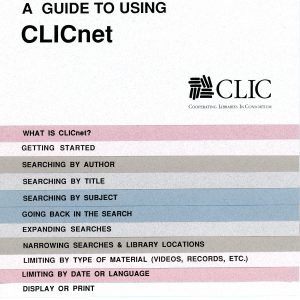 March 26, 2003.  The Board discussed the draft of the Strategic Plan created at the retreat and documented by the facilitator, Sue Hall (Milestone Group). Champions were selected for each area. Olson (CLIC) was charged with defining “servant leadership” and incorporating it into the document.

April 23, 2003.  The March financial report was the first one done on the new Peach Tree Accounting System. Hegdahl (CLIC) was thanked for her efforts getting the system up and running.

July 23, 2003.  The 2003-2005 Strategic Plan was officially approved. It was decided that the Executive Director would write and distribute CLIC wide a summary of Board actions after each meeting.

September 17, 2003.  Directors reported on progress toward their Strategic Plan goals.

Re-indexing the database at a cost of $5,200 was approved.

Olson (CLIC) informed the Board about the III Electronic Resources Management (ERM) product.

December 18, 2003.  The Board authorized the purchase of new system hardware and the move off of the Oracle platform. Migration cost estimated to be $50,000.

The Board agreed to review the job description and change the time of the performance evaluation of the Executive Director from fall to spring.