The early months of the year were focused upon fund raising for the automated system. The possibility of using a professional fund raising firm was explored and abandoned. A case statement for the project was written, funding foundations identified, plans for further contact with college presidents and trustees, etc. made. The Funding Plan for the Library Automation Project was written. It indicated that the system was expected to cost $1,017,000. CLIC’s parent institutions allocated one-third of the budget amount. Funding sources were approached to raise approximately $678,000. Kinney (MNE) was the Board member chosen as the fund-raising project director. She received time release from the College of St. Catherine to perform this task.

Relationships with OCLC, MINITEX, and other groups continued to be agenda items for Board meetings. A Committee appointed to investigate alternatives to OCLC for CLIC compiled a report.

April 25, 1985.  The Board authorized a complete update of the COM catalog in microfiche form. Also “short entries” would be removed from the database.

May 8, 1985.  The Board agreed to have a Planning Task Force to create long range plans for the direction of CLIC especially the implementation and administration of an online system. Susan Epstein was hired as consultant to CLIC for the automation project. Work identifying and establishing regular CLIC Committees such as: Catalog/Database Maintenance, Ill/Circulation, etc. continued.

May 23, 1985.  A significant motion was approved. “Resolved and approved that for the automated system CLIC collections are one collection and that access to materials by CLIC patrons shall be on a first come first serve basis regardless of what library literally own an item and who the CLIC patron is.” 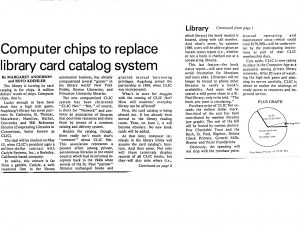 Funding for the new system continued to be a major activity. By September, it was time to seek money at the national level. Plans were made to move ahead.

A position to manage the system being essential a Board subcommittee was created to develop a job description and other pertinent documents.

Location of a central site for the system computer needed to be identified, secured, and prepared. The search for it began. Board began to meet more frequently i.e. approximately every two weeks for two hour periods.