After Chittenden’s (CLIC) resignation, a Board memo announced that Lisa Barnhart, the new CLIC Coordinator, would begin work in January.

The RFP for the online system was sent out to vendors February 14th with an eight week period for responses.

CLIC reached $500,000 of the funding necessary for the online system and work began on a news release announcing success.

February 6, 1986.  The Board authorized the purchase of a new vehicle for the ILL courier.

March 6, 1986.  The Board authorized a Serials Committee to deal with issues pertaining to serials and the automation system. However, the group was eliminated in August.

An important motion: “The Board strongly urges each CLIC institution to catalog all of their materials as resources permit.”

A recognition event for former Coordinator, Jan Chittenden was held on April 23, 1986.

In April Lisa Barnhart resigned as Coordinator. The Board’s Personnel Committee decided to try to hire a full-time Consortium Manager by September 1st. A team of individuals performed coordinator duties during the spring and summer.

CLIC received nine responses to the RFP. Vendors: AT&T, Biblio-Techniques, Carlyle, CLSI, DRA, Eyring, Geac, Honeywell, and Ulysis. The evaluation process began. The Evaluation Committee presented an introduction to the process to staff members of CLIC libraries on May 8th.

September 17, 1986.  The Board hired Terrence (Terry) Metz as Consortium Manager. He began his duties on October 15th. His office was at Hill Library.

September 22, 1986.  An executive session of the Board determined that Carlyle, Inc. was CLIC’s first choice for its automation vendor. Epstein was directed to begin negotiations.

After a request from Susan Kiefer, Director of Hamline University Law Library, that she be allowed to attend Board meetings as a non-voting member the Board agreed to honor her request.

November, 1986.  Macalester and the College of St. Catherine were candidates to supply space for CLIC’s automated system’s CPU. 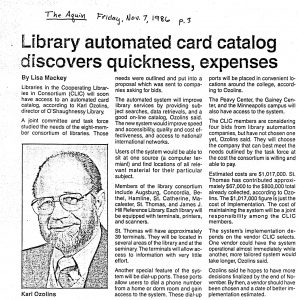 The Board established an Indexing Task Force in preparation for indexing the online catalog.
An Ad Hoc Committee of the Board investigated CLIC’s relationship with OCLC in an effort to minimize costs and make efficient use of the system.

December 23, 1986.  Memo to CLIC staff members from Board President, Offermann (MNC) Informed them that initial stages of contract negotiation with Carlyle Systems, Inc would begin in January, 1987. Jan Boche was CLIC’s attorney at this time.