February 17, 1994.  The personnel policy for CLIC staff was approved.

CLIC libraries began the process of cleaning up Brodart records on CLICnet.
The Electronic Transmission of ILL Task Force recommended the use of the OCLC electronic subsystem for ILL requests. The ability for libraries to implement the recommendation varied so work continued to achieve a workable system.

April 27, 1994.  Upgrades to the system and the hardware were discussed and approved. 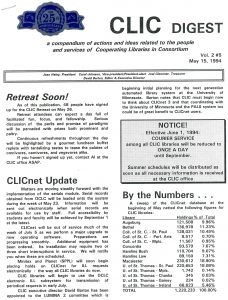 May 26, 1994.  CLIC Retreat Continuing Education was seen as an important activity.
Appropriate groups were directed to establish a training program about modules in the Dynix 140 release.

June 24, 1994.  Secretarial duties for the Board were transferred to the CLIC Executive Director i.e. Barton. CLIC Board officers became: President, Vice President and Treasurer.

Board accepted the AV Cataloging Review Task Force report that recommended each library take responsibility for cataloging their audio-visual materials.

November 16, 1994.  The Board began to consider the application of authority control to the database based on TSEC’s ( Technical Services Executive Committee) recommendations.