Lemuel S. Ranney writes to Henry following the death of their brother Lewis, to get Henry’s input on what accommodation they should make with Lewis’ widow, Sarah Ann. The first letter is undated, but seems to precede the second. Lewis died without a will and apparently intended that his wife would be taken care of by the brothers rather than simply inheriting all his assets as we would expect today. The situation was complicated by the fact that Lewis and Sarah Ann had no children. Lemuel does not seem particularly against the idea that the brothers grant a deed for the property to Sarah Ann and let her sell it, although he acknowledges that by current laws and customs she cannot claim that by right. This is the woman that Lewis had once described to Henry as a “rugged woman” and a partner who worked alongside him on the farm “from choice”.

In the second letter, the situation between the brothers and Sarah Ann seems to have worsened. Lemuel mentions that she had “forfeited all sympathy” by her actions, although it is difficult to tell if she wasn’t merely trying to get what she believed was rightfully hers. Even so, he suggests paying Sarah Ann $2,000 for her interest in the farm, which would leave about $1,000 in proceeds from its sale to cover a debt Lewis owed Lemuel and Lucius and a small amount for each of Lewis’ seven “heirs”, the six remaining brothers and their sister Priscilla.

Lemuel also mentions the birth of his son Samuel Owen the previous June. Lemuel was fifty-two years old and his wife forty when their only son was born. 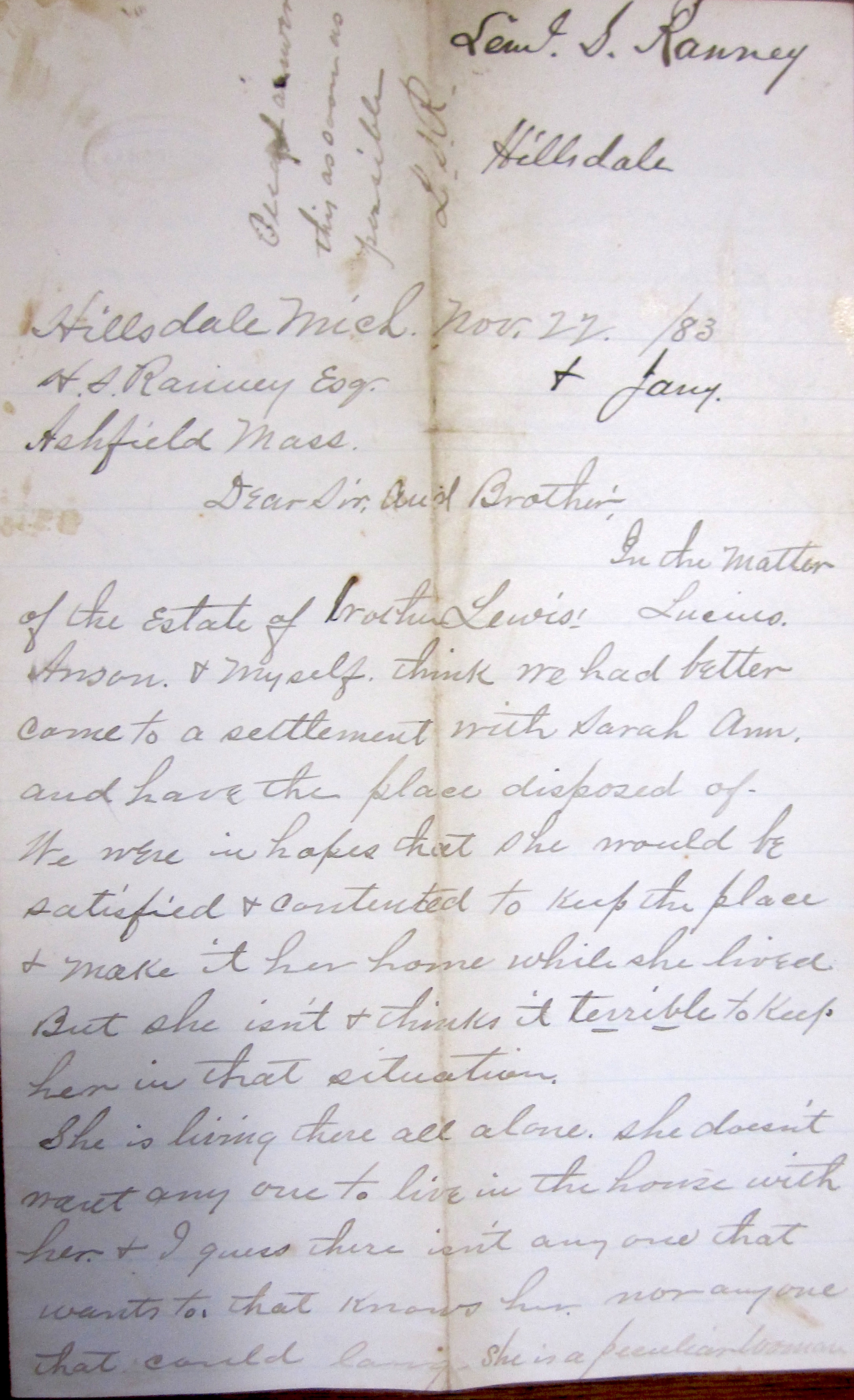 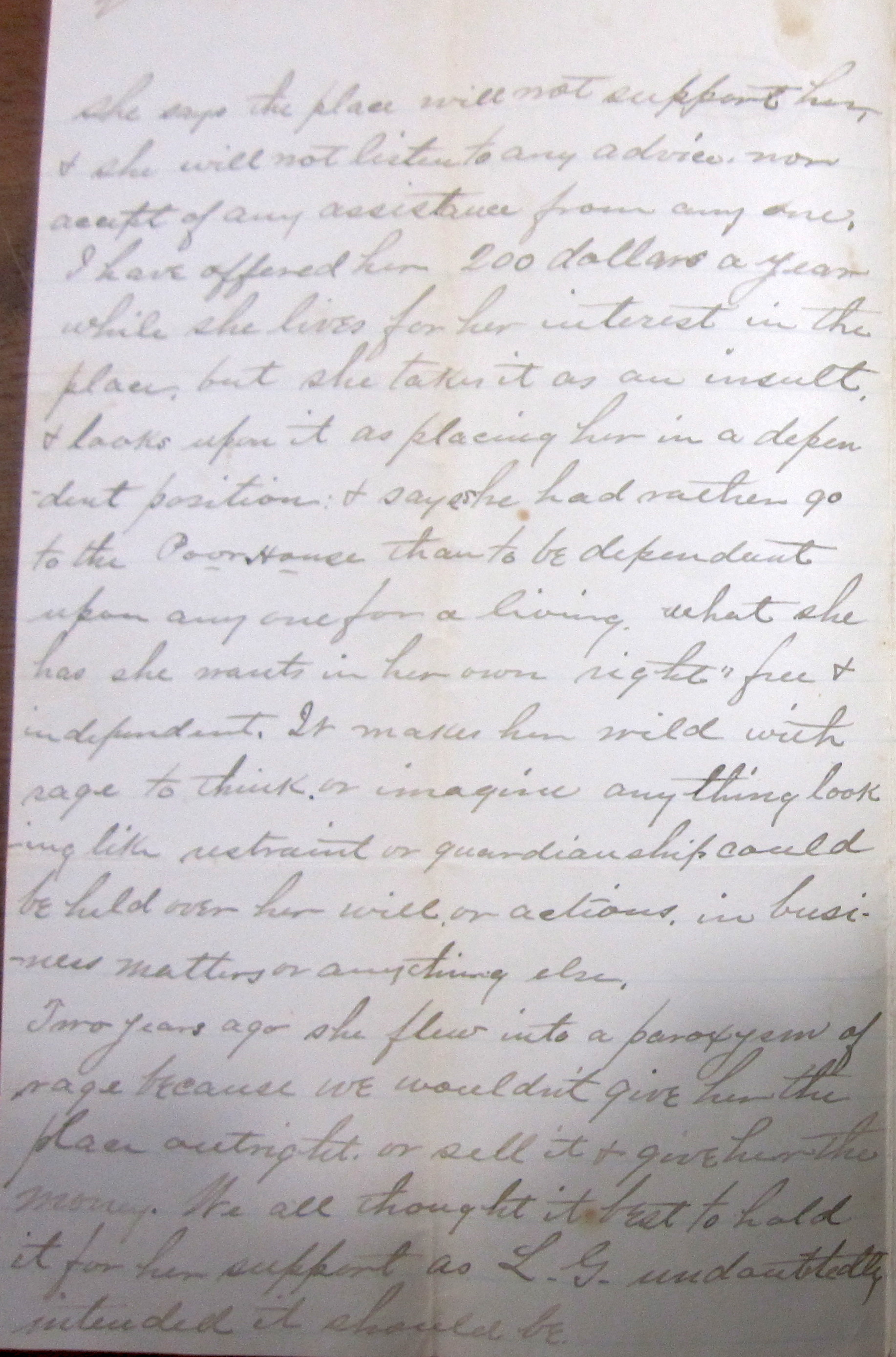 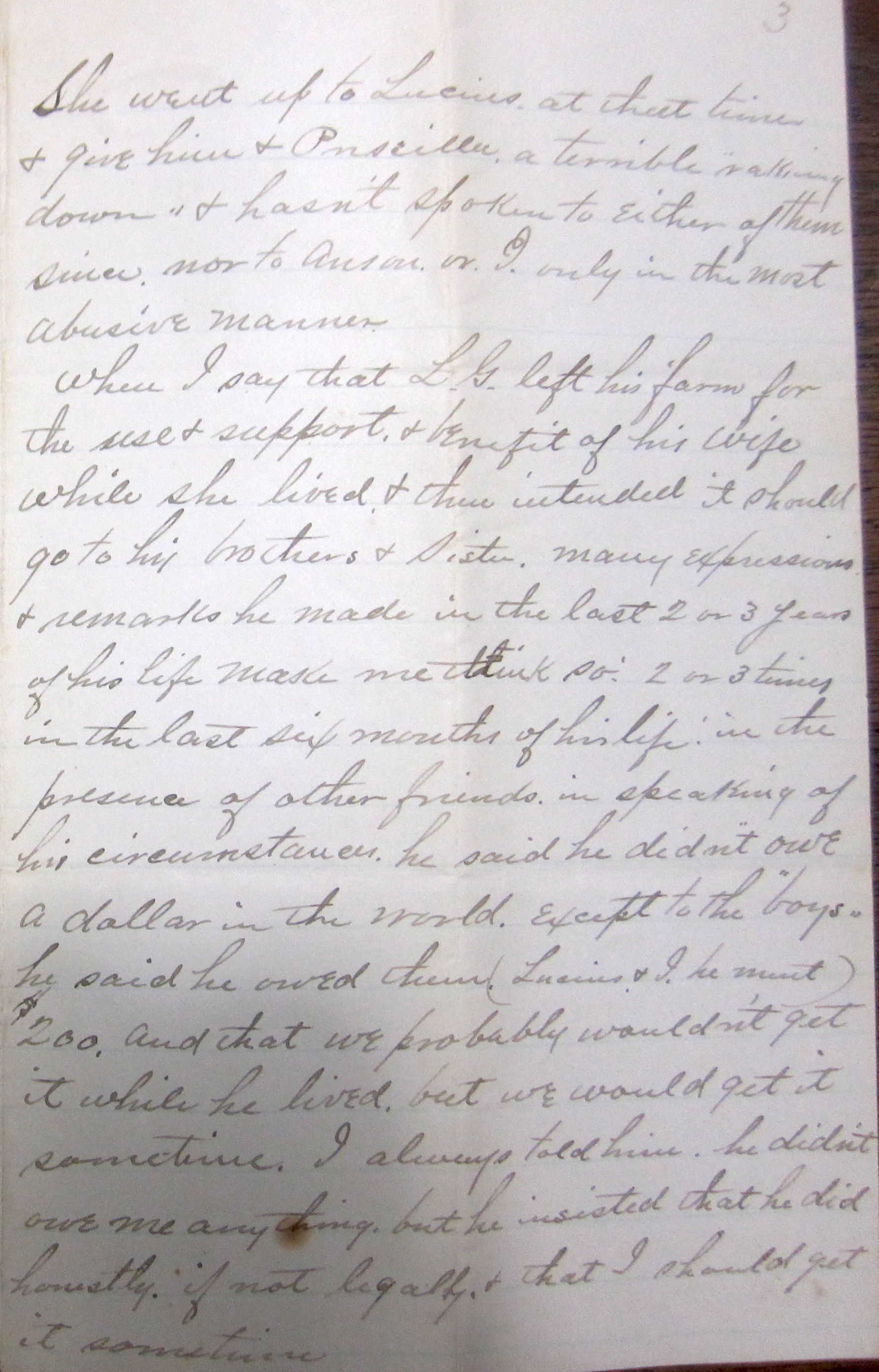 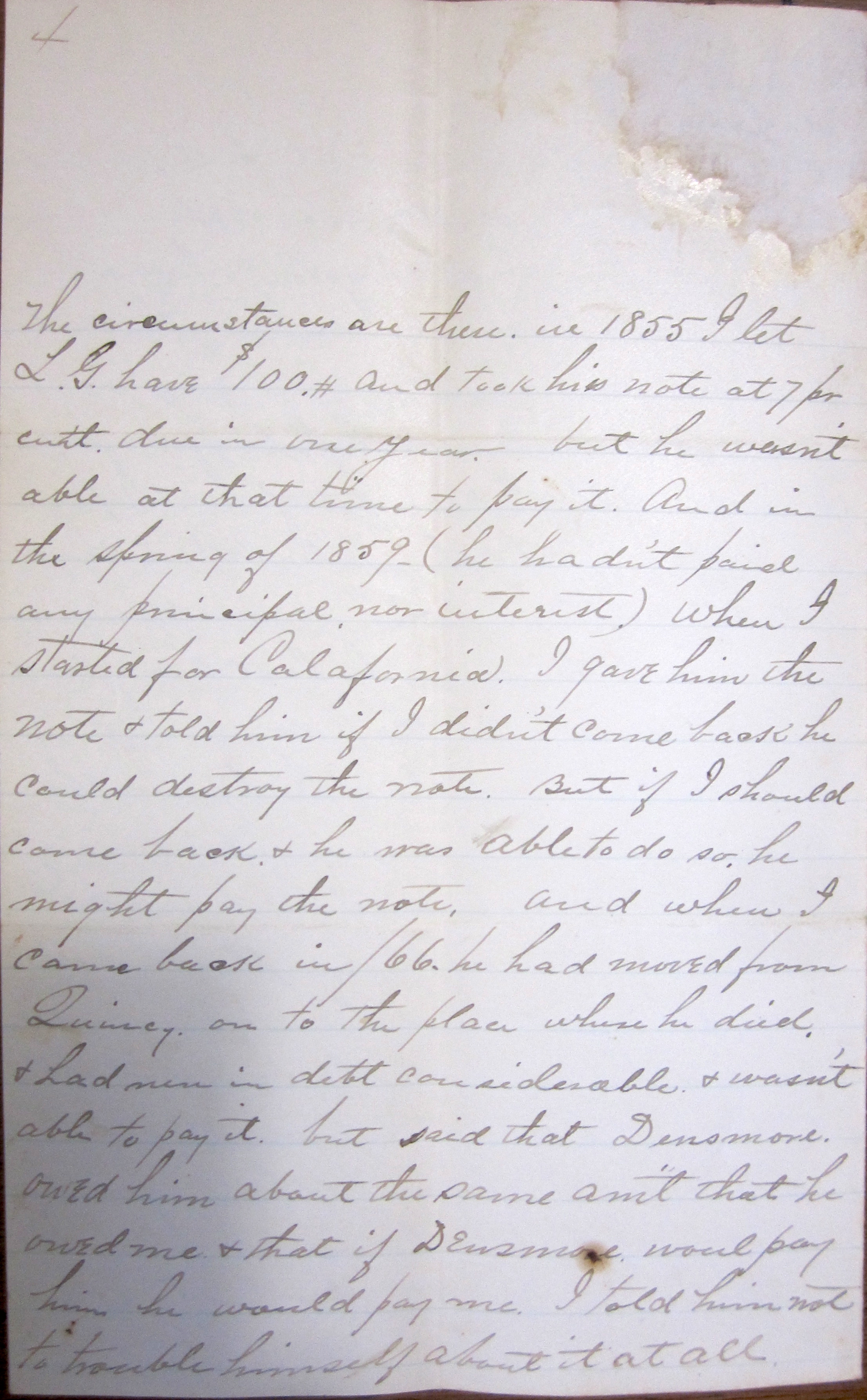 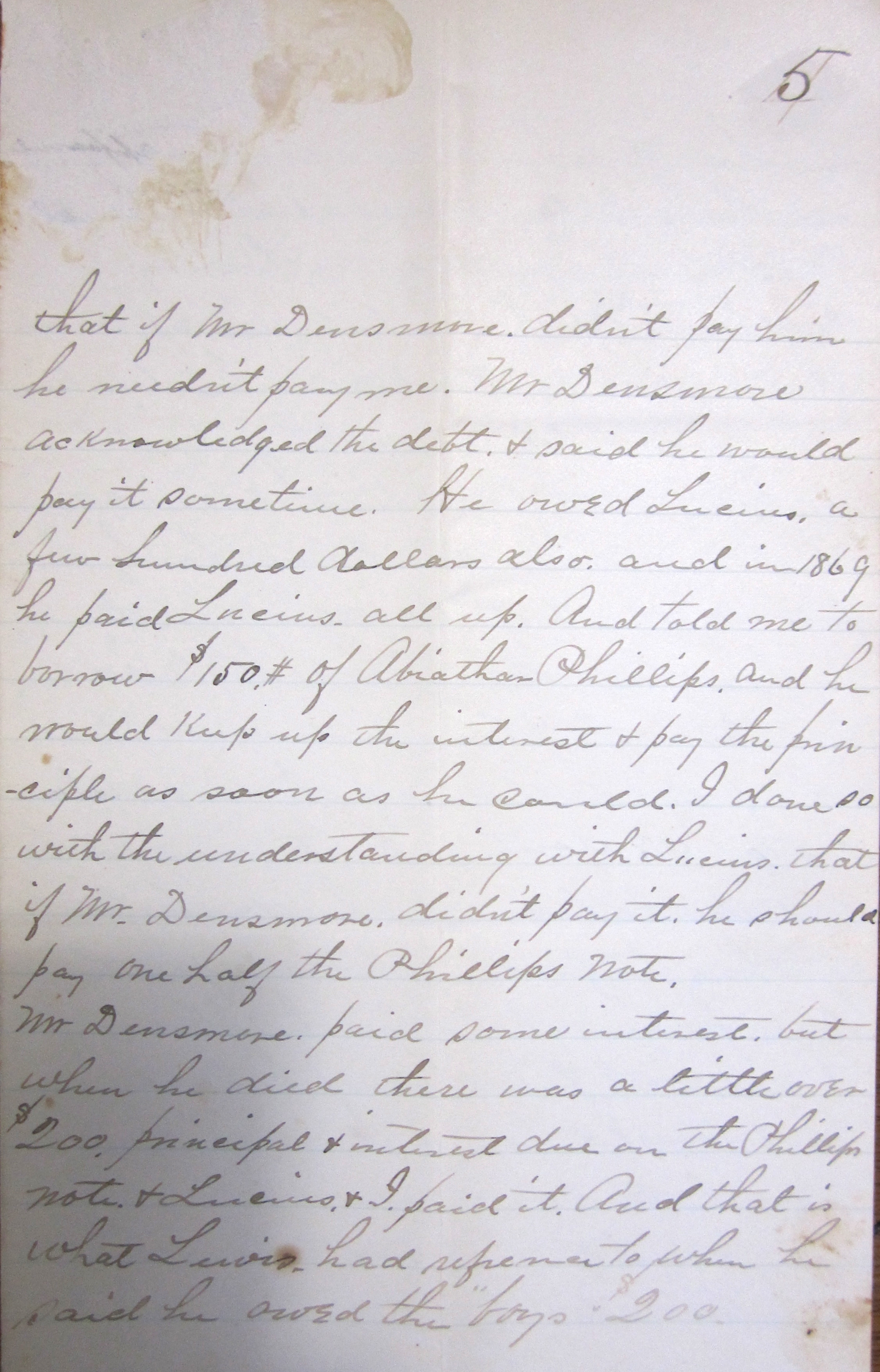 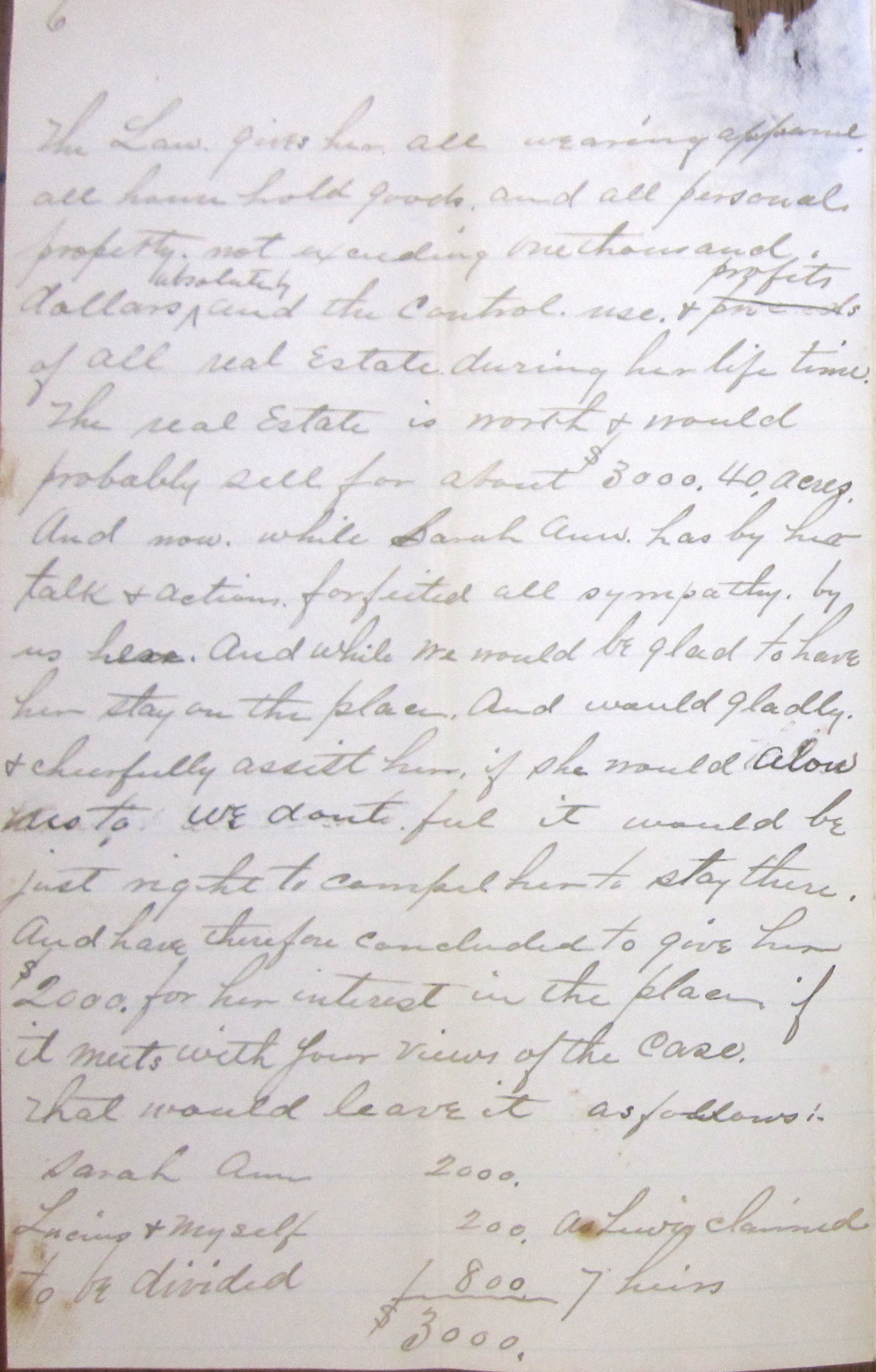 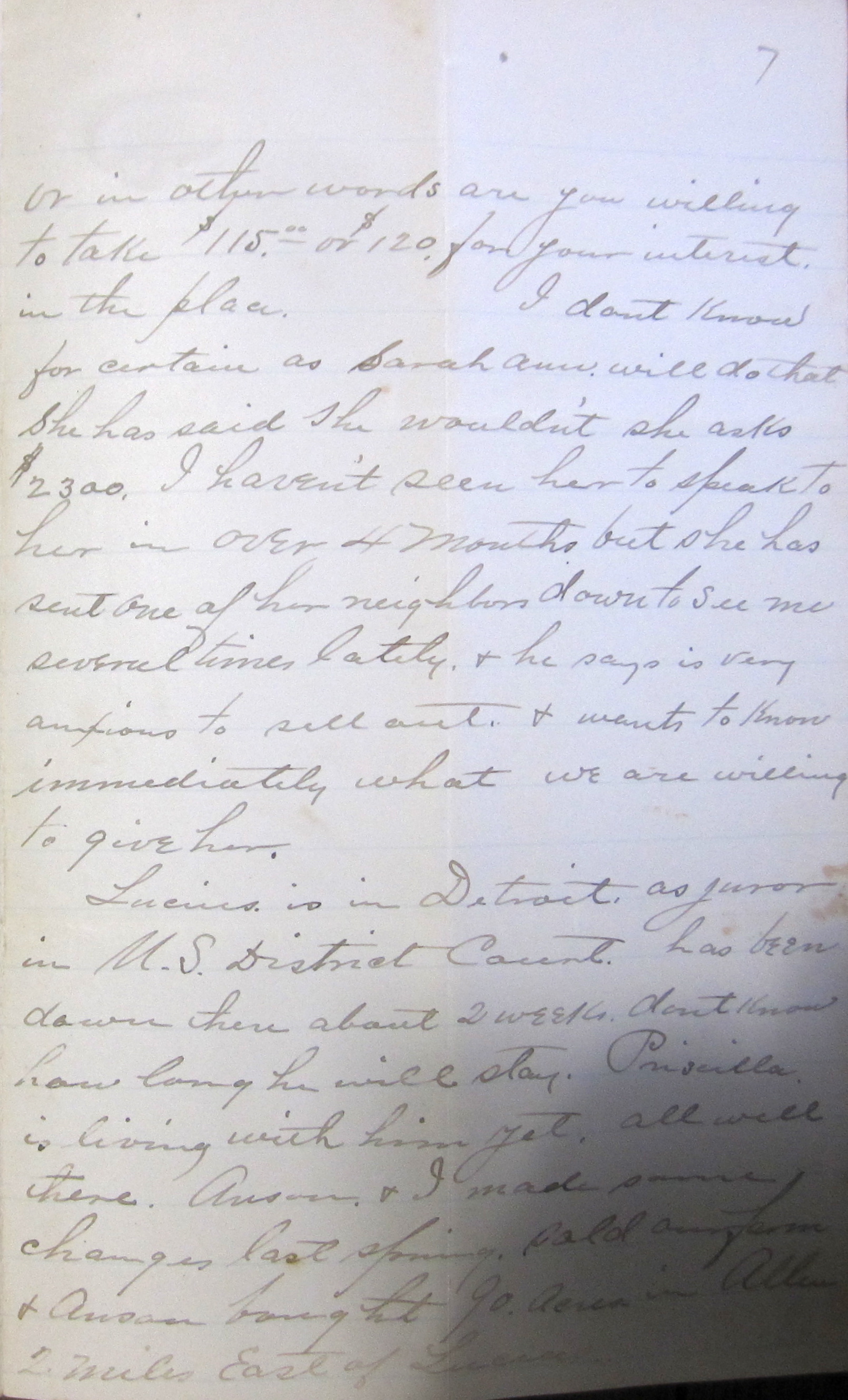 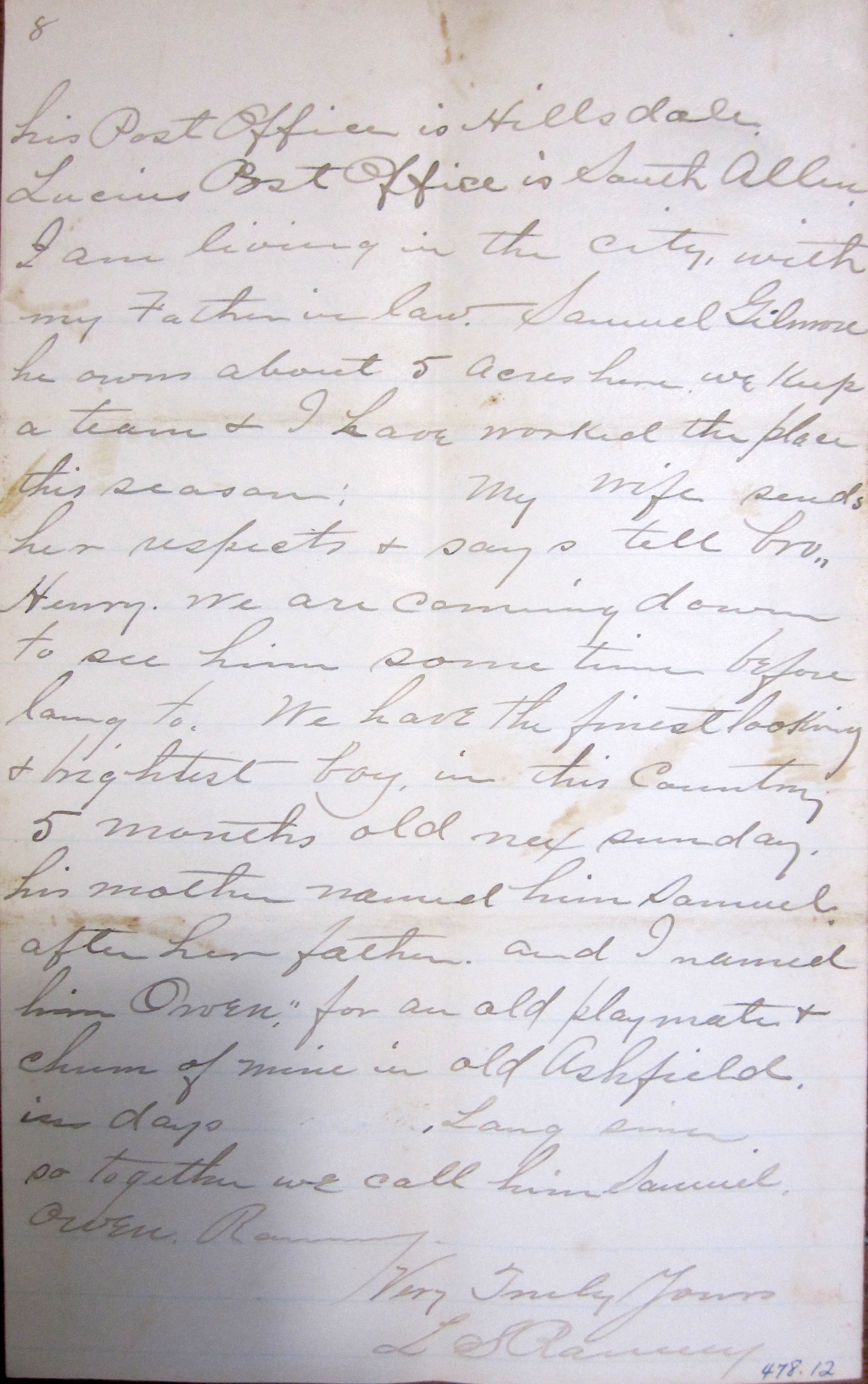 Brother Lewis left his farm of 40 acres, and about five hundred dollars in personal property, clear of any debts or incumbrances; without making a will.

After Lewis died Sarah Ann did not want to carry on the farm herself, and wanted to sell off all the stock, tools, grain, hay &c. and rent the place. She reserving the house & garden, as she said she would rather live there than anywhere else. So we sold everything but a horse & buggy, and turned the money over to her. Then she wanted Anson & I to take the place & work it, she to have the wheat then growing on the ground about 10 acres. We to give her one hundred dollars for one year, pay all the taxes & insurance, pasture her horse, & let her have all the fruit she wanted for her own use.

She has found no fault with us about the working of the place. But she now says she doesn’t want to live there any longer & she thinks the heirs ought to give her a deed of the place so that she can sell it & go and live where pleases & do as she pleases with the money she gets from it. Now what do you think had better be done about it? What are you willing to do?

Lucius, Anson, & I that if she had all the personal property, and the control & the use & the proceeds of the farm during her life, it would be all in justice & equity she could ask for, as Lewis left it in that way for her support. Knowingly & understandingly saying to her that the Boys would see that she was taken care of. We want to do what is just & right & for her best interests.

Sarah Ann requested me to write to you & Franklin & Harrison & ascertain if you were all willing to give her a deed to the place. Please let me hear from you right away.

We are all well here. I was at Lucius yesterday & they were all quite well.

With best wishes to Yourself & Wife

I remain very truly yours

In the matter of the estate of brother Lewis, Lucius Anson & myself think we had better come to a settlement with Sarah Ann and have the place disposed of. We were in hopes that she would be satisfied & contented to keep the place & make it her home while she lived. But she isn’t & thinks it terrible to keep her in that situation.

She is living there all alone. She doesn’t want anyone to live in the house with her & I guess there isn’t anyone that wants to that knows her nor anyone that could long. She is a peculiar woman. She says the place will not support her & she will not listen to any advice nor accept of any assistance from anyone. I have offered her $200 a year while she lives for her interest in the place, but she takes it as an insult & looks upon it as placing her in a dependent condition & says she had rather go to the poor house than to be dependent on anyone for a living. What she has she wants in her own right, free & independent. It makes her wild with rage to think or imagine anything looking like restraint or guardianship could be held over her will or actions in business matters or otherwise.

Two years ago she flew into a paroxysm of rage because we wouldn’t give her the place outright or sell it & give her the money. We all thought it best to hold it for her support as L.G. undoubtedly intended it should be. She went up to Lucius at that time & give him & Priscilla a terrible “raking down” & hasn’t spoken to either of them since nor to Anson or I only in the most abusive manner.

When I say that L.G. left his farm for the use & support & benefit of his wife while she lived & then intended it go to his brothers & sister, many expressions & remarks he made in the last 2 or 3 years of his life made me think so. 2 or 3 times in the last six months of his life in the presence of other friends, in speaking of his circumstances, he said he didn’t owe a dollar in the world except to the “boys”. He said he owed them (Lucius & I, he meant) $200 and that we probably wouldn’t get it while he lived, but we would get it sometime. I always told him he didn’t owe me anything, but he insisted that he did, honestly if not legally, & that I should get it sometime.

The circumstances are these. In 1855 I let L.G. have $100.# and took his note at 7 pr cent due in one year, but he wasn’t able at that time to pay it. And in the spring of 1859 (he hadn’t paid any principal nor interest) when I started for California, I gave him the note & told him if I didn’t come back he could destroy the note. But if I should come back & he was able to do so, he might pay the note. And when I came back in /66 he had moved from Quincy on to the place where he died & had men in debt considerable, & wasn’t able to pay it, but said that Densmore owed him about the same amt that he owed me & that if Densmore would pay him he would pay me. I told him not to trouble himself about it at all, that if Mr. Densmore didn’t pay him he needn’t pay me. Mr. Densmore acknowledged the debt & said he would pay it sometime. He owed Lucius a few hundred dollars also and in 1869 he paid Lucius all up. And told me to borrow $150.# of Abiathar Phillips and he would keep up the interest & pay him the principle as soon as he could. I done so with the understanding with Lucius that if Mr. Densmore didn’t pay it, he should pay one half the Phillips note.

Mr. Densmore paid some interest, but when he died there was a little over $200 principal & interest due on the Phillips note, & Lucius paid it. And that is what Lewis had reference to when he said he owed the “boys” $200.

The Law gives her all wearing apparel, all household goods, and all personal property not exceeding one thousand dollars absolutely, and the control, use, & profits of all real estate during her lifetime. The real estate is worth & would probably sell for about $3000, 40 acres.

And now, while Sarah Ann has by her talk & actions forfeited all sympathy by us here, and while we would be glad to have her stay on the place, and would gladly & cheerfully assist her if she would allow us to, we don’t feel it would be just right to compel her to stay there. And have therefore concluded to give her $2000 for her interest in the place if it meets with your views of the case. That would leave it as follows:

I don’t know for certain as Sarah Ann will do that. She has said she wouldn’t, she asks $2300. I haven’t seen her to speak to her in over 4 months but she has sent one of her neighbors down to see me several times lately, & he says is very anxious to sell out, & wants to know immediately what we are willing to give her.

Lucius is in Detroit as juror in U.S. District Court. Has been down there about 2 weeks, don’t know how long he will stay. Priscilla is living with him yet. All well there. Anson & I made some changes last spring. Sold our farm & Anson bought 90 acres in Allen 2 miles east of Lucius. His Post Office is Hillsdale. Lucius Post Office is South Allen. I am living in the city with my father in law, Samuel Gilmore. He owns about 5 acres here. We keep a team & I have worked the place this season.

My wife sends her respects & says tell bro Henry we are coming down to see him sometime before long too. We have the finest looking & brightest boy in this country. 5 months old next Sunday. His mother named him Samuel after her father & I named him Owen for an old playmate & chum of mine in old Ashfield in days long since. So together we call him Samuel Owen Ranney.