Lewis writes to Henry from Florence Michigan in February 1844. He waited for snow in Phelps, but when it did not come he set out in a wagon.  Their brother “Frank” (Alonzo Franklin Ranney) traveled with Lewis and his partner Smith as far as Hillsdale, in order to look for a farm near Lucius and their mother.  Achsah Sears Ranney was ill but improving, and Lewis says she likes her “situation” in Michigan.

When Lewis and Smith sold their peppermint oil to Franklin Wells, it was with the understanding that if the price had increased when Wells resold the oil they would get a share.  Before he left Phelps, Lewis found that Wells’s agents in New York City had sold the oil before Wells wanted them to, and that the price had subsequently doubled to $4 per pound.  Probably a “Gum Game,” says Lewis: a slang expression for a swindle, probably derived from the fact that raccoons and opossums often hide in sweet-gum trees to outwit predators (according to the Merriam Webster Dictionary).  Wells was on his way to the city to settle the issue, and Lewis was expecting a windfall on their 594 pounds that Wells had sent to be sold along with his own oil.  He repeats to Henry that he intends to more than double his peppermint investment, adding thirty new acres to the twenty he and Smith harvested that year (peppermint is a perennial, and yields only drop off a bit after the first year).

Lewis reports with amusement that the Mormons have been battling with the Methodists and others in Michigan, noting that it’s nice to have “something going on.”  Most of the Ranneys are not particularly religious — some, like Lewis’s uncle Samuel, had been pretty aggressive freethinkers.  This is fairly early in the development of Mormonism: Joseph Smith was still in Nauvoo Illinois organizing the church.  The biblical debates Lewis mentions must have been quite a spectacle.

The Michigan economy is better off than western New York, Lewis tells Henry in closing.  Lewis remarks “Wheat is worth 5/-“, but he’s referring not to British Shillings worth 24 cents each, but to divisions of the dollar into eights, worth $0.125 each. Wheat was 62.5¢ per bushel. Lewis also mentions that when his partner Smith marries, Lewis intends to live with him rather than get his own place.

My transcription follows the images of the letter: 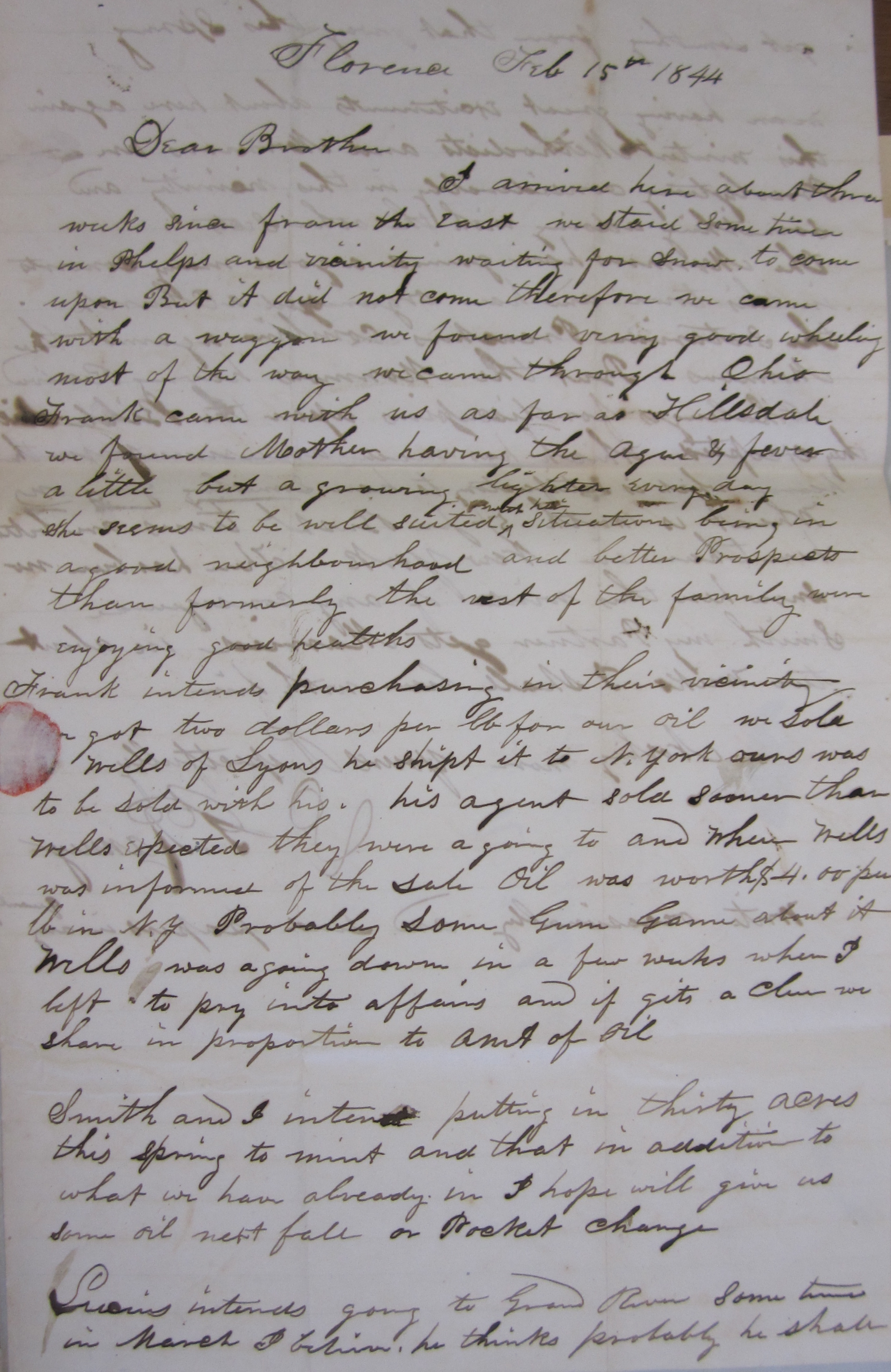 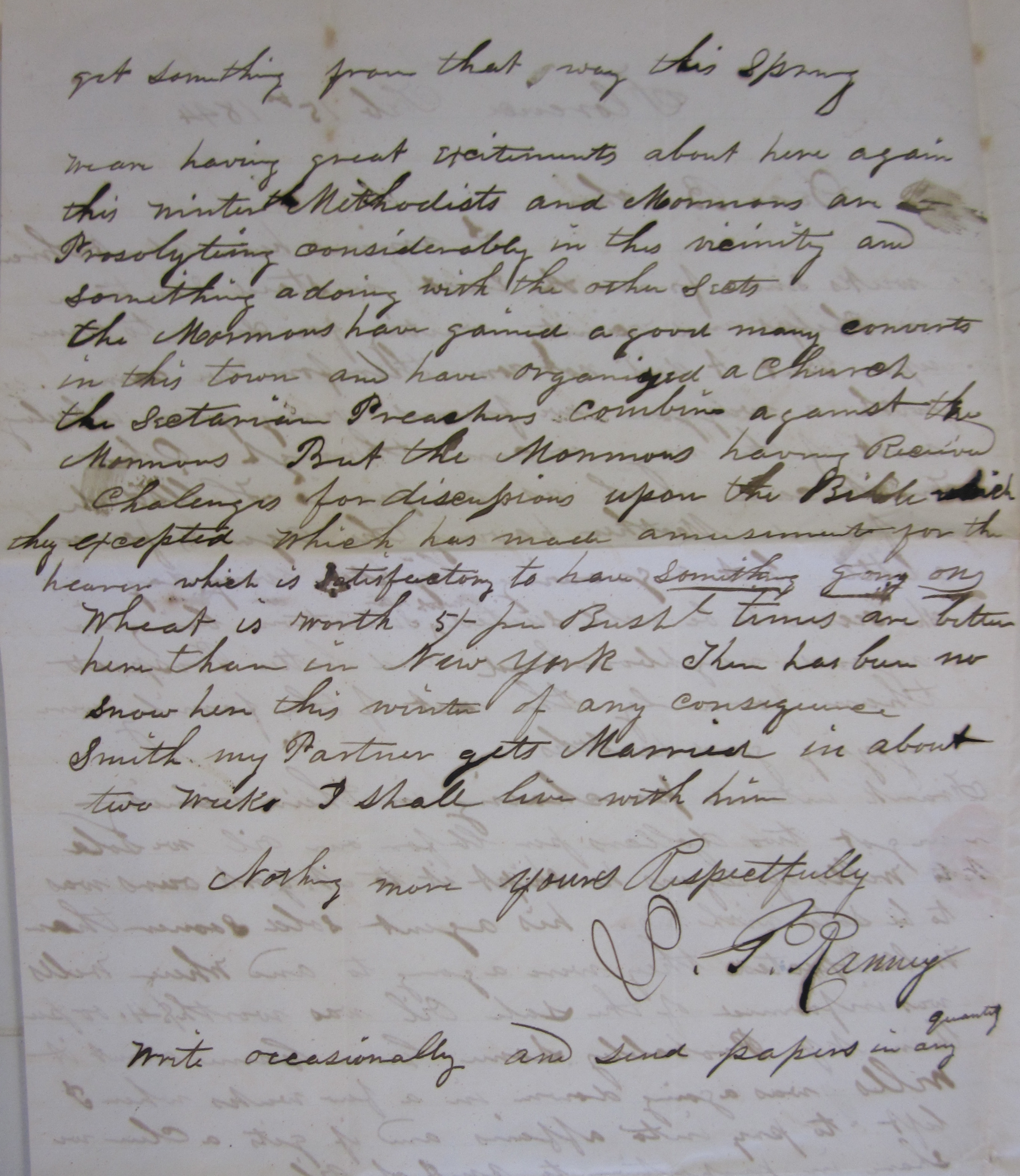 I arrived here about three weeks since from the East.  We stayed some time in Phelps and vicinity waiting for snow to come upon.  But it did not come, therefore we came with a wagon.  We found very good wheeling most of the way.  We came through Ohio.  Frank came with us as far as Hillsdale.  We found Mother having the ague & fever a little but a growing lighter every day.  She seems to be well suited with her situation, being in a good neighborhood and better prospects than formerly.  The rest of the family were enjoying good healths.

Frank intends purchasing in their vicinity.  We got two dollars per lb for our oil we sold Wells of Lyons.  He shipped it to N. York, ours was to be sold with his.  His agent sold sooner than Wells expected they were a going to and when Wells was informed of the sale oil was worth $4.00 per lb in NY.  Probably some Gum Game about it.  Wells was a going down in a few weeks when I left to pry into affairs and if gets a clue we share in proportion to amy of oil.

Smith and I intend putting in thirty acres this spring to mint and that in addition to what we have already in I hope will give us some oil next fall or pocket change.

Lucius intends going to Grand River sometime in March I believe.  He shall get something from that way this spring.

We are having great excitement about here again this winter.  Methodists and Mormons are proselytizing considerably in this vicinity and something a doing with the other sects.  The Mormons have gained a good many converts in this town and have organized a church.  The sectarian preachers combine against the Mormons.  But the Mormons having received challenges for discussions upon the Bible they accepted, which has made amusement for the hearer.  Which is satisfactory to have something going on.

Wheat is worth 5/- per bushel.  Times are better here than in New York.  There has been no snow here this winter of any consequence.  Smith my partner gets married in about two weeks.  I shall live with him.

Nothing more.  Yours respectfully,

Write occasionally and send papers in any quantity.