When his father moved the family to Phelps New York in August 1833, sixteen-year old Henry Sears Ranney remained in Ashfield to pursue a career as a merchant. Henry clerked for Jasper Bement and seems to have lived in Bement’s household for a time, preparing himself for a commercial career in Ashfield and briefly in Boston. In 1893, Ranney remembered Bement as “a successful  merchant; a public-spirited man  of strong and sterling characteristics, the most pronounced and active abolitionist & free-soiler of this region.” Ranney received his start in business working as a clerk in Bement’s store and was “a member of his family for six years—during which time I failed to receive from him a cross or impatient word.” So although Jasper Bement was not a blood relative, it seems appropriate to include a couple of important letters he sent Henry–which just happen to tell us some very interesting things about politics in the antebellum North.

Jasper Bement and Henry Ranney were both active “free soil” abolitionists, and in the early 1840s formed the nucleus of a “Liberty Party” in Ashfeld. In 1843, Jasper Bement campaigned for state representative as a Liberty candidate and lost, but a year later he won. Although they were interested in their businesses, Bement and Ranney were passionate about abolition. In August 1844, Bement wrote to Henry Ranney from Syracuse, New York, where he had stopped on his way to Detroit. Bement touched briefly on business, and then offered detailed descriptions of several conversations he had enjoyed with “Liberty Men,” and the reactions of strangers to whom he had offered abolitionist tracts at a political gathering. Bement gave Ranney some intelligence he had gathered on flour prices in Troy, and suggested a strategy for an upcoming Liberty Party convention. Bement confidentially advised against supporting Hooker Leavitt for State Senate because the voting public might become aware of his “disability” (Leavitt was aiding runaway slaves on the underground railroad) and reject him for public office. In spite of being rural businessmen from a remote community in the hills of western Massachusetts, Bement and Ranney shared a lifelong involvement in national politics. They both represented Ashfield in the legislature in Boston, and they maintained a far-flung network of family communication that frequently touched on important national issues like slavery.

Demonstrating his expert grasp of the classics, Bement mentions that the speaker at a rally “represented Polk as brought into this breathing world before his time & not half made up.” This is a line from Shakespeare, spoken by Richard III about himself, “sent before my time into this breathing world, scarcely half made up.” I had not noticed the reference until one of my Bemidji State University undergraduates, Emily Belland, called it to my attention. Great catch Emily! Don’t forget to mention that on your grad school application!

My transcription appears after the images of the letter: 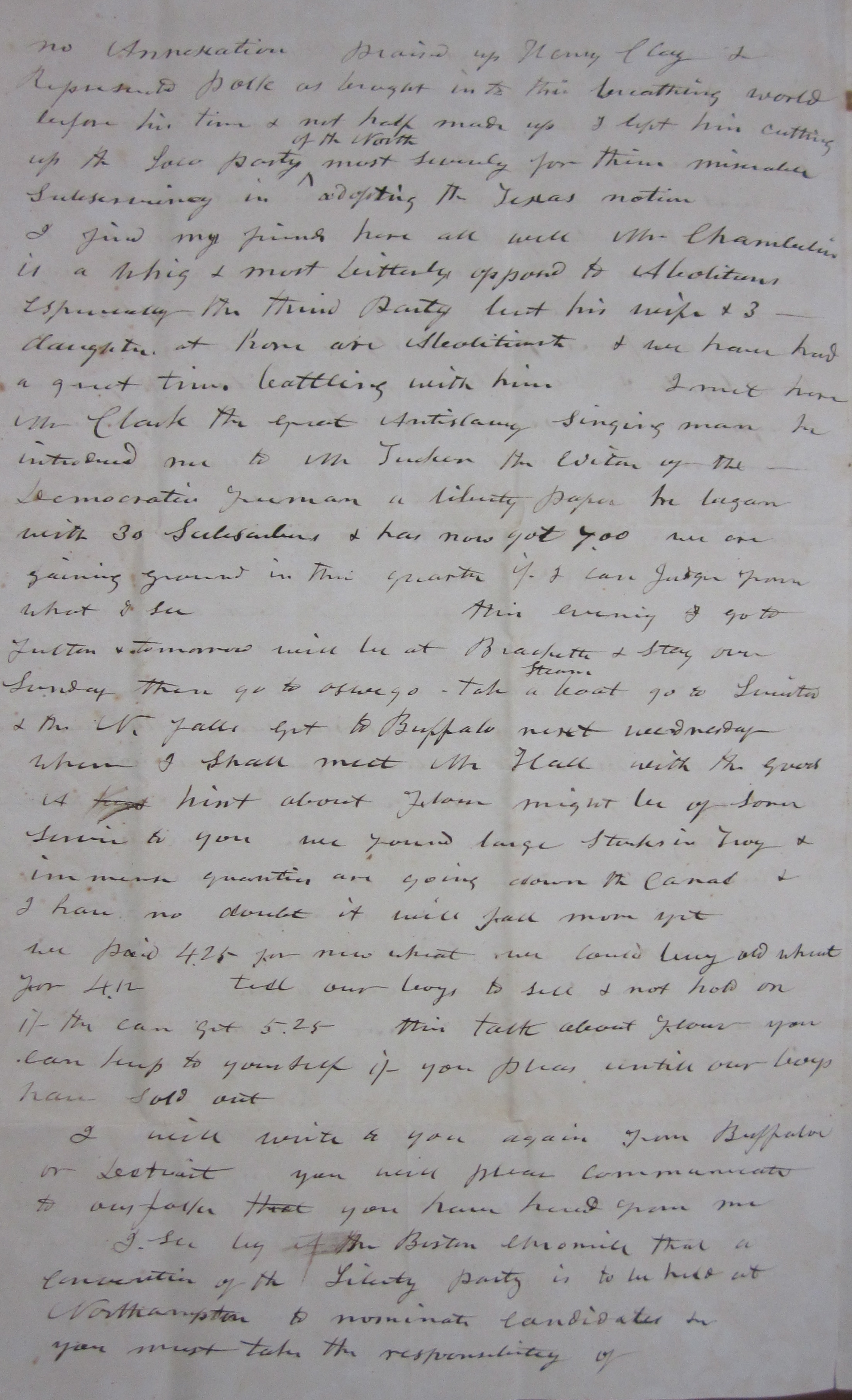 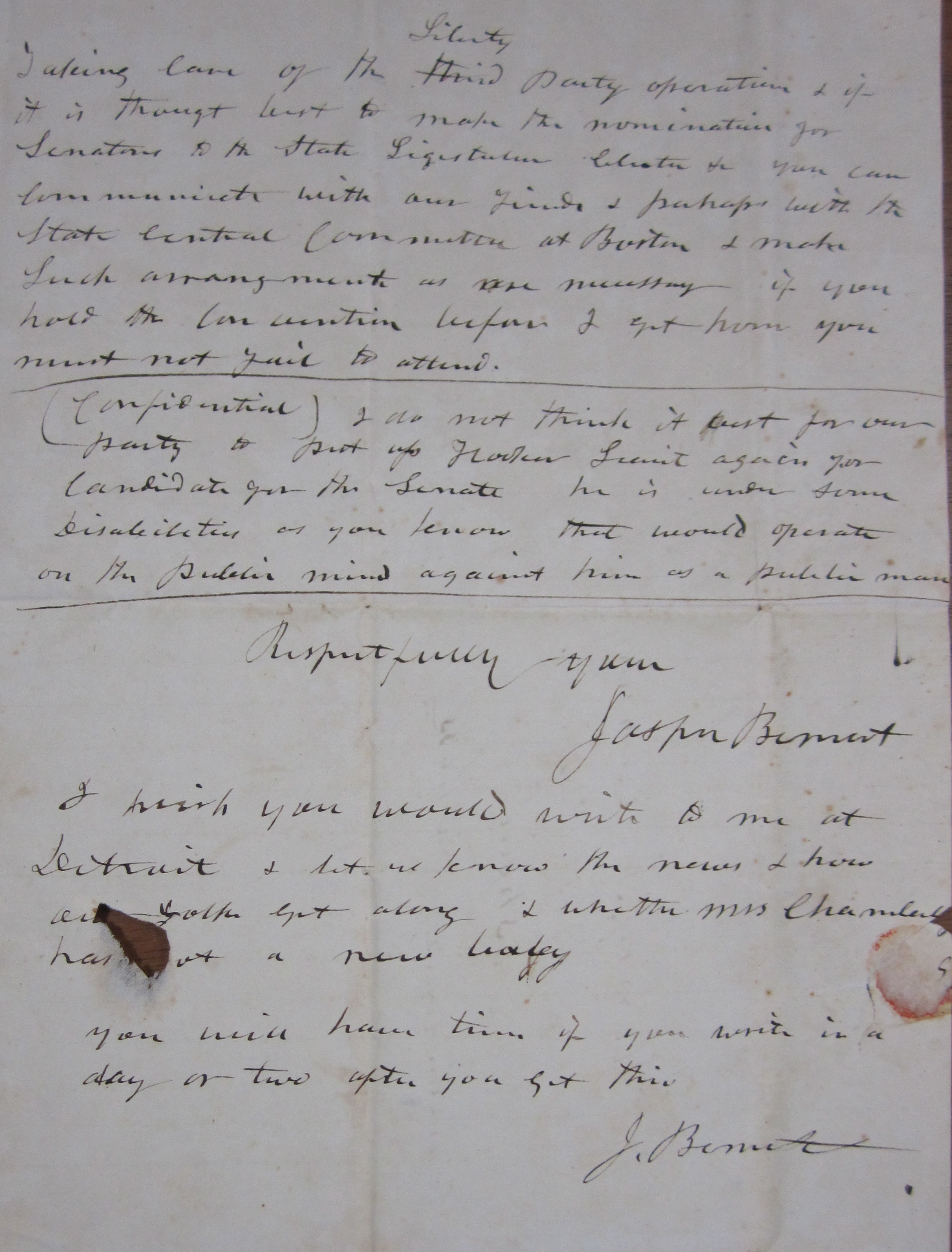 I avail myself of your proposal to send you some views of my progress. We arrived at Troy the next day after we started without any incident & found the city of Troy all alive with music and colors. Judging the several fire companies of Troy next day and Albany made a grand display with splendid uniforms particularly in the evening. Fireworks, torchlights and decorative flags and colors. They marched through all the principal streets with platforms 15 or 20 feet wide mounted on wagons with pyramids & [unclear] & 3 heavy bands of music placed at intervals in the procession which was perhaps ¼ mile long and a very imposing display. At Trop we shipped on board a canal boat with our luggage. The next day I left the boat & took the [railroad] cars and arrived at this place last night around 6 oclock. On the boat I had some collision with Abolition Whigs. One man in particular your argument I used up so fully that he gave it up and acknowledged I was right. I gave away some Abolition tracts. In every instance they were received eagerly & seemed willing and glad to read.  One man folded up a tact put it in his pocket & said I shall read this all over myself. I find people everywhere ready to discuss the subject of Political Abolition. There seems to be a spirit of enquiry abroad on this exciting subject. Last evening I went to the Log Cabin in this place & heard a Whig lecture from Mr. Barnard, member of Congress from this State. His object was to show that the Democratic Party had no principle but to obtain the spoils of office. The principle of the Whig Party was protection Tariff, distribution of public lands & no Annexation [of Texas]. Praised up Henry Clay and represented Polk as brought into this breathing world before his time & not half made up. I left him cutting up the Loco Party of the North most severely for their miserable subservience in adopting the Texas notion.

I find my friends here all well. Mr. Chamberlain is a Whig & most bitterly opposed to Abolitions, especially the third party. But his wife and 3 daughters at home are Abolitionists & we have had a great time battling with him. I met here Mr. Clark the expert Antislavery singing man. He introduced me to Mr. Tucker the editor of the Democratic Freeman, a Liberty paper. He began with 30 subscribers & now has got 700. We are gaining ground in this quarter if I can judge from what I see.

This evening I go to Fulton & tomorrow will be at Brachette & stay over Sunday. Then to Oswego, take a steam boat go to Lewiston & the N. [Niagara] Falls. Get to Buffalo next Wednesday where I shall meet Mr. Hall with the goods. If a hint about flour might be of some service to you we found large stocks in Troy and immense quantities are going down the canal & I have no doubt it will fall more yet. We paid 4.25 for new wheat, we could buy old wheat for 4.12. Tell our boys to sell and not hold on if they can get 5.25. This talk about flour you can keep to yourself if you please until our boys have sold out.

I will write you again from Buffalo or Detroit. You will please communicate to our folks that you have heard from me. I see by the Boston Chronicle that a convocation of the Liberty Party is to be held at Northampton to nominate candidates & you must take the responsibility of taking care of the Liberty Party operations & if it is thought best to make the nomination for Senator to the State Legislature election etc. you can communicate with our friends & perhaps with the State Central Committee at Boston & make such arrangements as are necessary if you hold the convention before I get home. You must not fail to attend.

(Confidential) I do not think it best for our party to put up Hooker Leavitt again for candidate for the Senate. He is under some disabilities as you know that would operate on the public mind against him as a public man.

I wish you would write to me at Detroit & let me know the news & how our folks get along & whether Mrs. Chamberlin has a new baby. You will have time if you write a day or two after you get this.