Jasper Bement writes to “Friend Ranney” from Buffalo New York, following up on his letter from Syracuse. Bement is unhappy his travels are taking so long, and complains that the whole trip is likely to last six weeks. Although canal boats, railroads, and steamships on the Great Lakes were beginning to reduce travel times between the east coast and places like Detroit, Bement was making several stops along the way to do business and talk politics. He mentions he took a mortgage from a debtor for $1,650 on 244 acres of land, and that he lectured on Abolition at a Liberty rally. Bement told Ranney he used “your notice”, so apparently Henry had prepared a handbill of some type announcing talks about Abolition.

In addition to “Liberty men”, Bement finds Whigs and Loco Focos (an equal rights faction of the Democratic Party) busily holding mass meetings. The Whigs, he says, are almost ready to vote for the Liberty platform, but felt they needed to support Henry Clay in the next presidential election to prevent Democrat James K. Polk from being elected and annexing Texas (they fail).

Bement visits Niagara Falls, which he calls a sublime spectacle. He visits Toronto and sees the monument at Queenston Heights, site of the first major battle of the War of 1812, and the battlefield of Lundy Lane. Bement recounts a bit of history and mentions a couple of accidents where people died at the Falls. He closes by again urging Ranney to write him care of Detroit. He addresses the letter to “Mr. Henry S. Ranney, Postmaster”, so we see the 27-year old Ranney is becoming a substantial citizen of Ashfield.

My transcription follows the images: 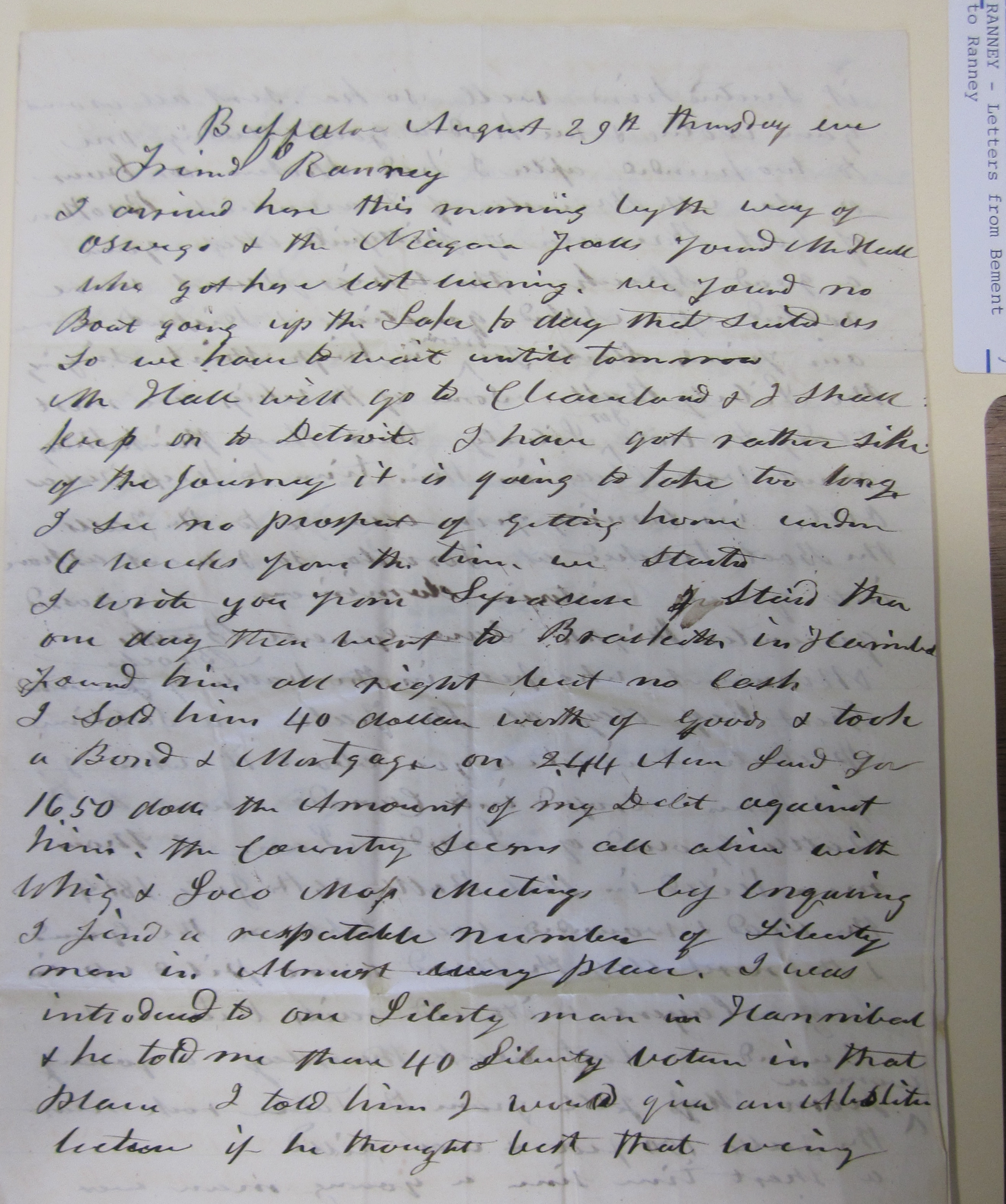 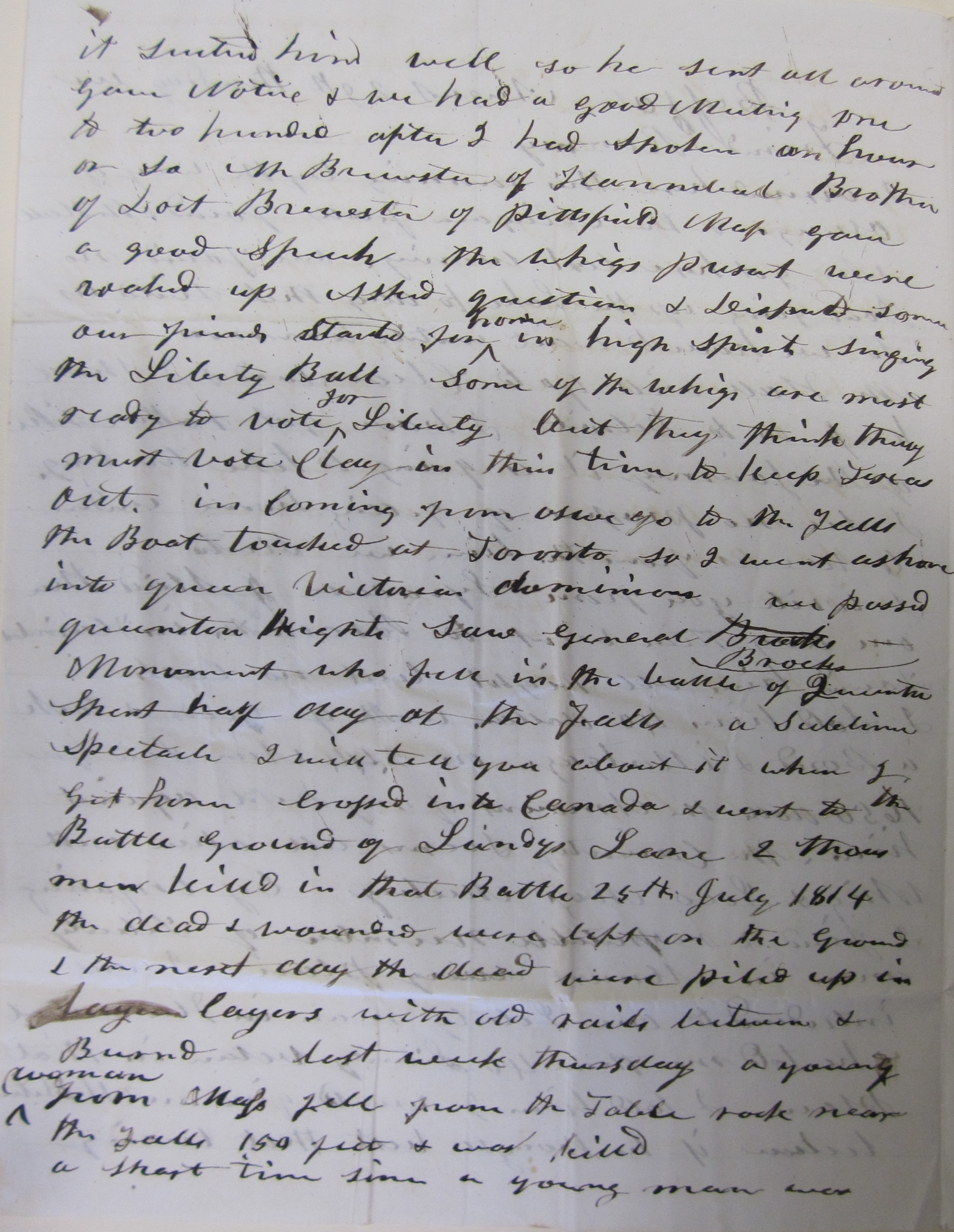 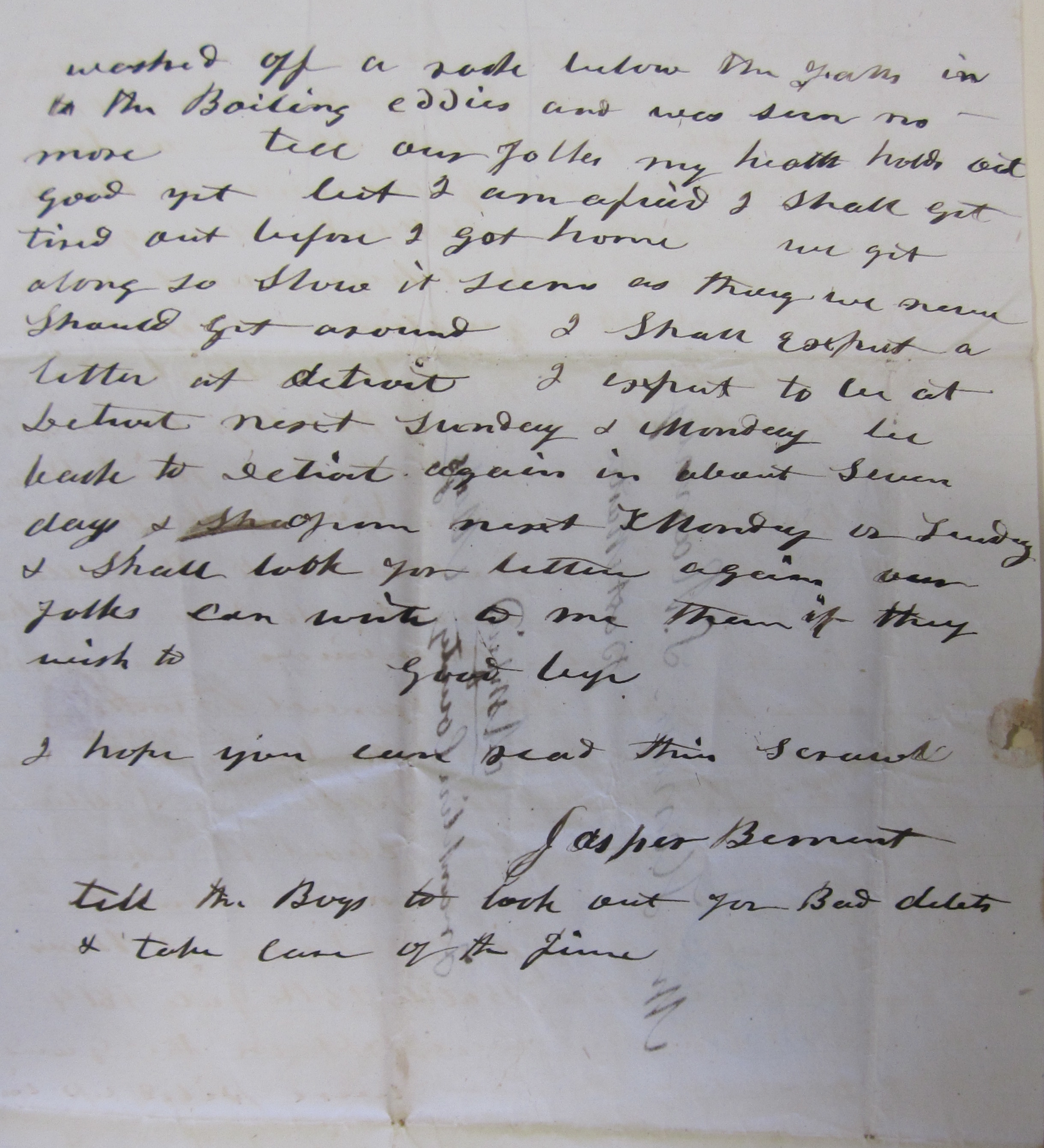 I arrived here this morning by the way of Oswego & the Niagara Falls. Joined Mr. Hall who got here last evening. We found no boat going up the Lake today that suited us so we have to wait until tomorrow. Mr. Hall will go to Cleveland & I shall keep on to Detroit. I have got rather sick of the journey, it is going to take too long. I see no prospect of getting home under six weeks from the time we started.

I wrote you from Syracuse. I stayed there one day then went to Brackett in Hannibal. Found him alright but no cash. I sold him 40 dollars worth of goods and took a bond & mortgage on 244 acres land for 1650 dollar the amount of my debt against him. The country seems all alive with Whigs & Loco mass meetings. By inquiring I find a respectable number of Liberty men in almost every place. I was introduced to one Liberty man in Hannibal & he told me there 40 Liberty voters in that place. I told him I would give an Abolition lecture if he thought best that evening. It suited him well so he sent all around your notice & we had a good meeting, one to two hundred. After I had spoken an hour or so Mr. Brewster of Hannibal, brother of Doct. Brewster of Pittsfield Mass, gave a good speech. The Whigs present were rocked up, asked questions & disputed some. Our friends started for home in high spirits singing the Liberty Ball. Some of the Whigs are most ready to vote for Liberty, but they think they must vote Clay in this time to keep Texas out.

In coming from us we go to the Falls. The boat touched at Toronto so I went ashore into Queen Victoria’s dominions. We passed Queenston Heights saw General Brock monument who fell in the battle of Queenston. Spent half day at the Falls, a sublime spectacle. I will tell you about it when I get home. Crossed into Canada & went to the battle ground of Lundy Lane. 2 thous men killed in that battle 25th July 1814. The dead & wounded were left on the ground & the next day the dead were piled up in layers with old rails between & burned. Last week Thursday a young woman from Mass fell from the Table Rock near the Falls 150 feet & was killed. A short time since a young man was washed off a rock below the Falls in the boiling eddies and was seen no more. Tell our folks my health holds out good yet but I am afraid I shall get tired out before I get home. We get along so slow it seems as though we never should get around.

I shall expect a letter at Detroit. I expect to be at Detroit next Sunday & Monday, be back to Detroit again in about seven days from next Monday or Tuesday. I shall look for letter again. Our folks can write to me there if they wish to.

I hope you can read this scrawl.

Tell the boys to look out for bad debts & take care of the time.