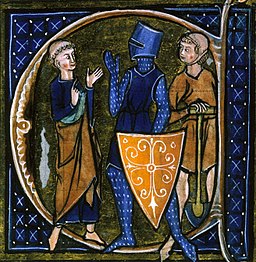 Medieval Europe, as Western Philosophy developed past the earliest Greek and Roman scholars, was not quite as homogeneous as we might think.  Early in this period, the outlying areas of Europe were still being converted from their pagan traditions to Christianity, and the ideas and rituals and practices of the Irish and the Scandinavians, for example, were impacting how Christianity in those places evolved.

Many of the writings  that we have written down in western philosophy from this time period do come from Christian church writers.  These writers were attempting to integrate secular issues of concern with religious doctrine and theology.  They have a broad approach to their work but still, all in all, are coming from a more religious approach to philosophy.  Thus the inclusion here of two Muslim writers from that period–a different medieval perspective was needed.

Both Rumi and Khayyam are poets and they also come from a religious perspective, that of Islam.  It is helpful to realize that Islam and its scholarship was, during the latter part of the medieval period, in a time of incredible growth and strength.  Massive amounts of work in science, medicine, philosophy and math came out of the Islamic world during the medieval period.  These two poets, however, became well known in the west a bit later in time through the work of western translators.  They offer, through their poetry, some other ideas about wisdom and love, on what is needed in order to live the good life, than perhaps come from the Christian scholars of that period.

The writings and philosophy of the medieval age, which can vary in time-frame, depending on whose perspective we are using, generally fall into a period from 500 CE to about 1500 CE.  Anslem, Aquinas and Augustine were patriarchs of the time, and their work is here.  We also have to include the later and more secular Machiavelli, whose name has become part of our language in a way that can seem scary and manipulative.  The letters here from Abelard and Heloise combine the very ordinary issues of forbidden love with religious belief.

More modern materials come with each of these, of course.  None of the big ideas here have been solved in our day!  Does God exist?  Can we prove it one way or another?  How do we talk about good and evil?  What is love?  Humans are still trying to get a handle on all of this, and you will find science, media, humor and academics still hard at it in modern links to help you deal with our medieval scholars.