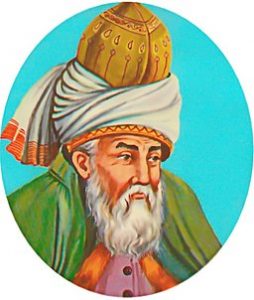 Rumi, 1207– 1273 CE,  was a 13th-century Persian Muslim poet, jurist, Islamic scholar, theologian, and Sufi mystic.  Rumi’s influence transcends national borders and ethnic divisions in the Muslim world and beyond. His poems have been widely translated into many of the world’s language. Rumi has become a widely read and popular poet, even in the US.

About Rumi:  from Coleman Barks[1]

Opening the Heart Through Ecstatic Poetry

You will find several selections of his works translated below.  Rumi speak of Love in much of his poetry, and there is some equation of love with the divine, as well.  His works help the discussion of the concept of God, and the definition of Love.

Be silent that the Lord who gave thee language may speak,
For as He fashioned a door and lock, He has also made a key.

“I SAW THE WINTER WEAVING”

I saw the winter weaving from flakes a robe of Death;
And the spring found earth in mourning, all naked, lone, and bare.
I heard Time’s loom a-whirring that wove the Sun’s dim Veil;
I saw a worm a-weaving in Life-threads its own lair.
I saw the Great was Smallest, and saw the Smallest Great;
For God had set His likeness on all the things that were.

THE SILENCE OF LOVE

Love is the astrolabe of God’s mysteries.
A lover may hanker after this love or that love,
But at the last he is drawn to the KING of Love.
However much we describe and explain Love,
When we fall in love we are ashamed of our words.
Explanation by the tongue makes most things clear,
But Love unexplained is better.

Woman is a ray of God, not a mere mistress,
The Creator’s Self, as it were, not a mere creature!

THE GIFTS OF THE BELOVED

Where will you find one more liberal than God?
He buys the worthless rubbish which is your wealth,
He pays you the Light that illumines your heart.
He accepts these frozen and lifeless bodies of yours,
And gives you a Kingdom beyond what you dream of,
He takes a few drops of your tears,
And gives you the Divine Fount sweeter than sugar.
He takes your sighs fraught with grief and sadness,
And for each sigh gives rank in heaven as interest.
In return for the sigh-wind that raised tear-clouds,
God gave Abraham the title of “Father of the Faithful.”

ALL RELIGIONS ARE ONE

In the adorations and benedictions of righteous men
The praises of all the prophets are kneaded together.
All their praises are mingled into one stream,
All the vessels are emptied into one ewer.
Because He that is praised is, in fact, only One.
In this respect all religions are only one religion.
Because all praises are directed towards God’s Light,
These various forms and figures are borrowed from it.

Listen to this Ted Talk by Imam Feisal Abdul Rauf[2]:

Lose Your Ego, Find Your Compassion

The Project Gutenberg EBook of The Persian Mystics

This eBook is for the use of anyone anywhere at no cost and with almost no restrictions whatsoever. You may copy it, give it away or re-use it under the terms of the Project Gutenberg.  License included with this eBook or online at www.gutenberg.org.