The WAGER from PASCAL’S PENSÉES 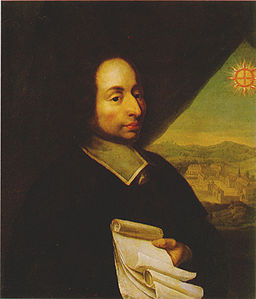 Pascal’s Wager is an argument in philosophy presented by the seventeenth century  philosopher, mathematician, and physicist Blaise Pascal (1623–1662 CE). It states that all people bet with their lives that God exists.  Pascal says that a rational person actually should live as though God exists. If God does not actually exist, any person will have only a little loss in how they live their lives (some pleasures and luxury that might be given up to satisfy the directive of faith), whereas they stand to receive everything (as represented by Heaven) and avoid infinite losses (eternity in Hell).

“The end of this discourse.—Now, what harm will befall you in taking this side? You will be faithful, honest, humble, grateful, generous, a sincere friend, truthful. Certainly you will not have those poisonous pleasures, glory and luxury; but will you not have others?”

Unity joined to infinity adds nothing to it, no more than one foot to an infinite measure. The finite is annihilated in the presence of the infinite, and becomes a pure nothing. So our spirit before God, so our justice before divine justice. There is not so great a disproportion between our justice and that of God, as between unity and infinity.

The justice of God must be vast like His compassion. Now justice to the outcast is less vast, and ought less to offend our feelings than mercy towards the elect.

We know that there is an infinite, and are ignorant of its nature. As we know it to be false that numbers are finite, it is therefore true that there is an infinity in number. But we do not know what it is. It is false that it is even, it is false that it is odd; for the addition of a unit can make no change in its nature. Yet it is a number, and every number is odd or even (this is certainly true of every finite number). So we may well know that there is a God without knowing what He is. Is there not one substantial truth, seeing there are so many things which are not the truth itself?

But by faith we know His existence; in glory we shall know His nature. Now, I have already shown that we may well know the existence of a thing, without knowing its nature.

Let us now speak according to natural lights.

If there is a God, He is infinitely incomprehensible, since, having neither parts nor limits, He has no affinity to us. We are then incapable of knowing either what He is or if He is. This being so, who will dare to undertake the decision of the question? Not we, who have no affinity to Him.

Who then will blame Christians for not being able to give a reason for their belief, since they profess a religion for which they cannot give a reason? They declare, in expounding it to the world, that it is a foolishness,  stultitiam; and then you complain that they do not prove it! If they proved it, they would not keep their word; it is in lacking proofs, that they are not lacking in sense. “Yes, but although this excuses those who offer it as such, and takes away from them the blame of putting it forward without reason, it does not excuse those who receive it.” Let us then examine this point, and say, “God is, or He is not.” But to which side shall we incline? Reason can decide nothing here. There is an infinite chaos which separated us. A game is being played at the extremity of this infinite distance where heads or tails will turn up. What will you wager? According to reason, you can do neither the one thing nor the other; according to reason, you can defend neither of the propositions.

Do not then reprove for error those who have made a choice; for you know nothing about it. “No, but I blame them for having made, not this choice, but a choice; for again both he who chooses heads and he who chooses tails are equally at fault, they are both in the wrong. The true course is not to wager at all.”

Yes; but you must wager. It is not optional. You are embarked. Which will you choose then? Let us see. Since you must choose, let us see which interests you least. You have two things to lose, the true and the good; and two things to stake, your reason and your will, your knowledge and your happiness; and your nature has two things to shun, error and misery. Your reason is no more shocked in choosing one rather than the other, since you must of necessity choose. This is one point settled. But your happiness? Let us weigh the gain and the loss in wagering that God is. Let us estimate these two chances. If you gain, you gain all; if you lose, you lose nothing. Wager, then, without hesitation that He is.—”That is very fine. Yes, I must wager; but I may perhaps wager too much.”—Let us see.

Since there is an equal risk of gain and of loss, if you had only to gain two lives, instead of one, you might still wager. But if there were three lives to gain, you would have to play (since you are under the necessity of playing), and you would be imprudent, when you are forced to play, not to chance your life to gain three at a game where there is an equal risk of loss and gain. But there is an eternity of life and happiness. And this being so, if there were an infinity of chances, of which one only would be for you, you would still be right in wagering one to win two, and you would act stupidly, being obliged to play, by refusing to stake one life against three at a game in which out of an infinity of chances there is one for you, if there were an infinity of an infinitely happy life to gain. But there is here an infinity of an infinitely happy life to gain, a chance of gain against a finite number of chances of loss, and what you stake is finite. It is all divided; wherever the infinite is and there is not an infinity of chances of loss against that of gain, there is no time to hesitate, you must give all. And thus, when one is forced to play, he must renounce reason to preserve his life, rather than risk it for infinite gain, as likely to happen as the loss of nothingness.

“I confess it, I admit it. But, still, is there no means of seeing the faces of the cards?”—Yes, Scripture and the rest, etc. “Yes, but I have my hands tied and my mouth closed; I am forced to wager, and am not free. I am not released, and am so made that I cannot believe. What, then, would you have me do?”

True. But at least learn your inability to believe, since reason brings you to this, and yet you cannot believe. Endeavor then to convince yourself, not by increase of proofs of God, but by the abatement of your passions. You would like to attain faith, and do not know the way; you would like to cure yourself of unbelief, and ask the remedy for it. Learn of those who have been bound like you, and who now stake all their possessions. These are people who know the way which you would follow, and who are cured of an ill of which you would be cured. Follow the way by which they began; by acting as if they believed, taking the holy water, having masses said, etc. Even this will naturally make you believe, and deaden your acuteness.—”But this is what I am afraid of.”—And why? What have you to lose?

But to show you that this leads you there, it is this which will lessen the passions, which are your stumbling-blocks.

The end of this discourse.—Now, what harm will befall you in taking this side? You will be faithful, honest, humble, grateful, generous, a sincere friend, truthful. Certainly you will not have those poisonous pleasures, glory and luxury; but will you not have others? I will tell you that you will thereby gain in this life, and that, at each step you take on this road, you will see so great certainty of gain, so much nothingness in what you risk, that you will at last recognize that you have wagered for something certain and infinite, for which you have given nothing.

The Project Gutenberg EBook of Pascal’s Pensées, by Blaise Pascal