Simone Lucie Ernestine Marie Bertrand de Beauvoir,  1908 – 1986 CE, was a French writer, existentialist, political activist, and feminist.  Though she did not consider herself a philosopher, she had a significant influence on both feminist existentialism and feminist theory. 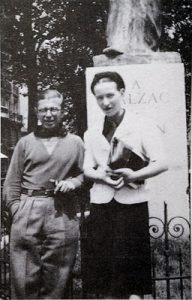 De Beauvoir wrote novels, essays, biographies, autobiography and monographs on philosophy, politics and social issues. She was known for her 1949 treatise The Second Sex, a detailed analysis of women’s oppression and a foundational tract of  contemporary  feminism.

From 1929, de Beauvoir and Jean-Paul Sartre were partners for fifty-one years until his death in 1980.  De Beauvoir did not marry nor set up a joint household with Sartre, and she never had children. She had numerous lovers of both genders over these same years, and was suspended from teaching in 1943 due to an accusation of abuse of a young female student.  Her license to teach was permanently revoked in France.

“One is not born but becomes a woman.”  With this famous phrase, Beauvoir first articulated the sex-gender distinction, that is, the distinction between biological sex  and the social/historical creation of gender. Beauvoir explains, in her book The Second Sex that woman is usually referred as “the other.”

“What is a woman?’…The fact that I ask it is in itself significant. A man would never get the notion of writing a book on the peculiar situation of the human male. But if I wish to define myself, I must first of all say: ‘I am a woman’; on this truth must be based all further discussion. A man never begins by presenting himself as an individual of a certain sex; it goes without saying that he is a man. […] It would be out of the question to reply: ‘And you think the contrary because you are a man,’ for it is understood that the fact of being a man is no peculiarity.”   Simone de Beauvoir