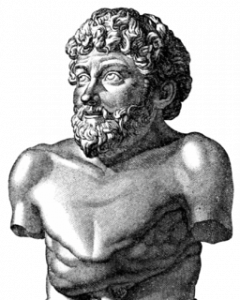 Aesop, this ancient Greek, is well known by name, but his actual existence is a bit questionable.  Crediting all these short stories to him may also be a little problematic!  Tradition has him being born about 620 BCE and this collection of fables attributed to him are now known, for better or for worse, as Aesop’s Fables.  Like all folklore, these little stories try to make a point that would benefit the reader in living their everyday life.  Here is a little extra background.

and Who is Aesop? 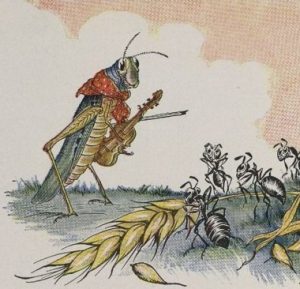 The Ants and the Grasshopper

THE ANTS were spending a fine winter’s day drying grain collected in the summertime. A Grasshopper, perishing with famine, passed by and earnestly begged for a little food. The Ants inquired of him, “Why did you not treasure up food during the summer?” He replied, “I had not leisure enough. I passed the days in singing.” They then said in derision: “If you were foolish enough to sing all the summer, you must dance supperless to bed in the winter.” 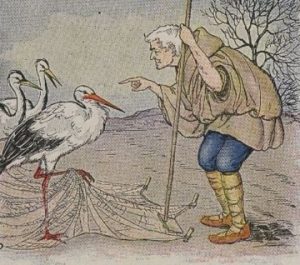 The Farmer and the Stork

A FARMER placed nets on his newly-sown plowlands and caught a number of Cranes, which came to pick up his seed. With them he trapped a Stork that had fractured his leg in the net and was earnestly beseeching the Farmer to spare his life. “Pray save me, Master,” he said, “and let me go free this once. My broken limb should excite your pity. Besides, I am no Crane, I am a Stork, a bird of excellent character; and see how I love and slave for my father and mother. Look too, at my feathers—they are not the least like those of a Crane.” The Farmer laughed aloud and said, “It may be all as you say, I only know this: I have taken you with these robbers, the Cranes, and you must die in their company.”

Birds of a feather flock together. 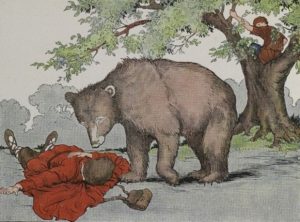 The Bear and the Two Travelers

TWO MEN were traveling together, when a Bear suddenly met them on their path. One of them climbed up quickly into a tree and concealed himself in the branches. The other, seeing that he must be attacked, fell flat on the ground, and when the Bear came up and felt him with his snout, and smelt him all over, he held his breath, and feigned the appearance of death as much as he could. The Bear soon left him, for it is said he will not touch a dead body. When he was quite gone, the other Traveler descended from the tree, and jocularly inquired of his friend what it was the Bear had whispered in his ear. “He gave me this advice,” his companion replied. “Never travel with a friend who deserts you at the approach of danger.”

Misfortune tests the sincerity of friends. 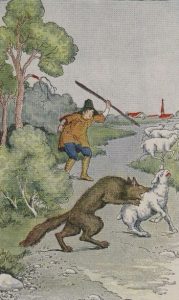 The Shepherd’s Boy and the Wolf

A SHEPHERD-BOY, who watched a flock of sheep near a village, brought out the villagers three or four times by crying out, “Wolf! Wolf!” and when his neighbors came to help him, laughed at them for their pains. The Wolf, however, did truly come at last. The Shepherd-boy, now really alarmed, shouted in an agony of terror: “Pray, do come and help me; the Wolf is killing the sheep;” but no one paid any heed to his cries, nor rendered any assistance. The Wolf, having no cause of fear, at his leisure lacerated or destroyed the whole flock.

There is no believing a liar, even when he speaks the truth. 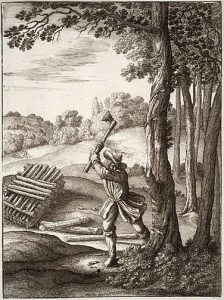 The Fox and the Woodcutter

A FOX, running before the hounds, came across a Woodcutter felling an oak and begged him to show him a safe hiding-place. The Woodcutter advised him to take shelter in his own hut, so the Fox crept in and hid himself in a corner. The huntsman soon came up with his hounds and inquired of the Woodcutter if he had seen the Fox. He declared that he had not seen him, and yet pointed, all the time he was speaking, to the hut where the Fox lay hidden. The huntsman took no notice of the signs, but believing his word, hastened forward in the chase. As soon as they were well away, the Fox departed without taking any notice of the Woodcutter: whereon he called to him and reproached him, saying, “You ungrateful fellow, you owe your life to me, and yet you leave me without a word of thanks.” The Fox replied, “Indeed, I should have thanked you fervently if your deeds had been as good as your words, and if your hands had not been traitors to your speech.”

The Project Gutenberg EBook of Aesop’s Fables, by Aesop.

This eBook is for the use of anyone anywhere at no cost and with almost no restrictions whatsoever.  You may copy it, give it away or re-use it under the terms of the Project Gutenberg.  License included with this eBook or online at www.gutenberg.org