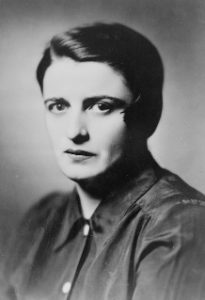 Ayn Rand,1905 – 1982 CE, was a Russian-American novelist and philosopher. She is best known for her two novels, The Fountainhead and Atlas Shrugged, and for developing a philosophical system she called  Objectivism. She was born and educated in Russia, and moved to the United States in 1926.  She was first noticed by the media and the general public after the publication in 1943 of her novel, The Fountainhead. In 1957, Rand published her best-known work, the novel Atlas Shrugged.  Rand insisted that reason be the only means of acquiring knowledge and she adamantly rejected any kind of adherence to or use of religion. She supported rational and ethical egoism and rejected any form of altruism.

You might want to hear about a couple of basic concepts right from Ayn Rand herself:

Ayn Rand on the importance of Happiness

(From The Virtue of Selfishness.  “The Objectivist Ethics” ) About Selfishness:

The Objectivist ethics proudly advocates and upholds rational selfishness— which means: the values required for man’s survival qua man — which means: the values required for human survival — not the values produced by the desires, the emotions, the “aspirations,” the feelings, the whims or the needs of irrational brutes, who have never outgrown the primordial practice of human sacrifices, have never discovered an industrial society and can conceive of no self-interest but that of grabbing the loot of the moment.

The Objectivist ethics holds that human good does not require human sacrifices and cannot be achieved by the sacrifice of anyone to anyone. It holds that the rational interests of men do not clash — that there is no conflict of interests among men who do not desire the unearned, who do not make sacrifices nor accept them, who deal with one another as traders, giving value for value.

Rand’s view is that the exact opposite is true: Self-interest, properly understood, is the standard of morality and selflessness is the deepest immorality.“

(From Philosophy: Who Needs It.  “Faith and Force: the Destroyers of the Modern World”) About Altruism:

What is the moral code of altruism? The basic principle of altruism is that man has no right to exist for his own sake, that service to others is the only justification of his existence, and that self-sacrifice is his highest moral duty, virtue and value.

Do not confuse altruism with kindness, good will or respect for the rights of others. These are not primaries, but consequences, which, in fact, altruism makes impossible. The irreducible primary of altruism, the basic absolute, is self-sacrifice — which means; self-immolation, self-abnegation, self-denial, self-destruction — which means: the self as a standard of evil, the selfless as a standard of the good.

Ayn Rand: How is This Still a Thing?

Comedy can be an interesting way to approach big ideas.  Ayn Rand has been very controversial in philosophy and ethics.  Try watching a little John Oliver and his commentary about Ayn Rand and her ideas from this October 2014 clip before continuing on reading about Rand’s ideas.

(From Philosophy: Who Needs It, “Selfishness Without a Self”)   About Altruism:

It is obvious why the morality of altruism is a tribal phenomenon. Prehistorical men were physically unable to survive without clinging to a tribe for leadership and protection against other tribes. The cause of altruism’s perpetuation into civilized eras is not physical, but psycho-epistemological: the men of self-arrested, perceptual mentality are unable to survive without tribal leadership and “protection” against reality. The doctrine of self-sacrifice does not offend them: they have no sense of self or of personal value — they do not know what it is that they are asked to sacrifice — they have no firsthand inkling of such things as intellectual integrity, love of truth, personally chosen values, or a passionate dedication to an idea. When they hear injunctions against “selfishness,” they believe that what they must renounce is the brute, mindless whim-worship of a tribal lone wolf. But their leaders — the theoreticians of altruism — know better. Immanuel Kant knew it; John Dewey knew it; B. F. Skinner knows it; John Rawls knows it. Observe that it is not the mindless brute, but reason, intelligence, ability, merit, self-confidence, self-esteem that they are out to destroy.

(From For the New Intellectual.  “Galt’s Speech”)  About the Self:

The self you have betrayed is your mind; self-esteem is reliance on one’s power to think. The ego you seek, that essential “you” which you cannot express or define, is not your emotions or inarticulate dreams, but your intellect, that judge of your supreme tribunal whom you’ve impeached in order to drift at the mercy of any stray shyster you describe as your “feeling.”

(From For the New Intellectual.  “Galt’s Speech”)  About the Self:

My morality, the morality of reason, is contained in a single axiom: existence exists — and in a single choice: to live. The rest proceeds from these. To live, man must hold three things as the supreme and ruling values of his life: Reason — Purpose — Self-esteem. Reason, as his only tool of knowledge — Purpose, as his choice of the happiness which that tool must proceed to achieve — Self-esteem, as his inviolate certainty that his mind is competent to think and his person is worthy of happiness, which means: is worthy of living. These three values imply and require all of man’s virtues, and all his virtues pertain to the relation of existence and consciousness: rationality, independence, integrity, honesty, justice, productiveness, pride.