African folktales, like in many other places, are from a long oral tradition.  These tales are for teaching, for passing on cultural values, and for making points about life.  The Anike Foundation is a strong advocate for education in Africa, and has links here to various other tribal stories that may be of interest.

THE TIGER, THE RAM, AND THE JACKAL 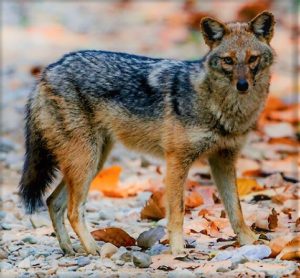 Tiger  was returning home from hunting on one occasion, when he lighted on the kraal of Ram. Now, Tiger had never seen Ram before, and accordingly, approaching submissively, he said, “Good day, friend! What may your name be?”

The other in his gruff voice, and striking his breast with his forefoot, said, “I am Ram. Who are you?”

“Tiger,” answered the other, more dead than alive, and then, taking leave of Ram, he ran home as fast as he could.

Jackal lived at the same place as Tiger did, and the latter going to him, said, “Friend Jackal, I am quite out of breath, and am half dead with fright, for I have just seen a terrible looking fellow, with a large and thick head, and  on my asking him what his name was, he answered, ‘I am Ram.'”

“What a foolish fellow you are,” cried Jackal, “to let such a nice piece of flesh stand! Why did you do so? But we shall go to-morrow and eat it together.”

Next day the two set off for the kraal of Ram, and as they appeared over a hill, Ram, who had turned out to look about him, and was calculating where he should that day crop a tender salad, saw them, and he immediately went to his wife and said, “I fear this is our last day, for Jackal and Tiger are both coming against us. What shall we do?”

“Don’t be afraid,” said the wife, “but take up the child in your arms, go out with it, and pinch it to make it cry as if it were hungry.” Ram did so as the confederates came on.

No sooner did Tiger cast his eyes on Ram than fear again took possession of him, and he wished to turn back. Jackal had provided against this, and made Tiger fast to himself with a leather thong, and said, “Come on,” when Ram cried in a loud voice, and pinching his child at the same time, “You have done well, Friend Jackal, to have brought us Tiger to eat, for you hear how my child is crying for food.”

On these dreadful words Tiger, notwithstanding the entreaties of Jackal to let him go, to let him loose, set off in the greatest alarm, dragged Jackal after him over hill and valley, through bushes and over rocks, and never stopped to look behind him till he brought back himself and half-dead Jackal to his place again. And so Ram escaped. 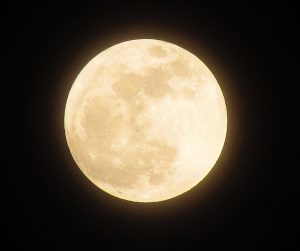 THE ORIGIN OF DEATH

The Moon, on one occasion, sent the Hare to the earth to inform Men that as she (the Moon) died away and rose again, so mankind should die and rise again. Instead, however, of delivering this message as given, the Hare, either out of forgetfulness or malice, told mankind that as the Moon rose and died away, so Man should die and rise no more. The Hare, having returned to the Moon, was questioned as to the message delivered, and the Moon, having heard the true state of the case, became so enraged with him that she took up a hatchet to split his head; falling short, however, of that, the hatchet fell upon the upper lip of the Hare, and cut it severely. Hence it is that we see the “Hare-lip.” The Hare, being duly incensed at having received such treatment, raised his claws, and scratched the Moon’s face;  and the dark spots which we now see on the surface of the Moon are the scars which she received on that occasion.

THE DANCE FOR WATER OR RABBIT’S TRIUMPH

There was a frightful drought. The rivers after a while dried up and even the springs gave no water.

The animals wandered around seeking drink, but to no avail. Nowhere was water to be found.

A great gathering of animals was held: Lion, Tiger, Wolf, Jackal, Elephant, all of them came together. What was to be done? That was the question. One had this plan, and another had that; but no plan seemed of value.

Finally one of them suggested: “Come, let all of us go to the dry river bed and dance; in that way we can tread out the water.”

Good! Everyone was satisfied and ready to begin instantly, excepting Rabbit, who said, “I will not go and dance. All of you are mad to attempt to get water from the ground by dancing.”

The other animals danced and danced, and ultimately danced the water to the surface. How glad they were. Everyone drank as much as he could, but Rabbit did not dance with them. So it was decided that Rabbit should have no water.

He laughed at them: “I will nevertheless drink some of your water.”

That evening he proceeded leisurely to the river bed where the dance had been, and drank as much as he wanted. The following morning the animals saw the footprints of Rabbit in the ground, and Rabbit shouted to them: “Aha! I did have some of the water, and it was most refreshing and tasted fine.”

Quickly all the animals were called together. What were they to do? How were they to get Rabbit in their hands? All had some means to propose; the one suggested this, and the other that. 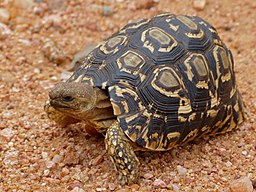 “You? How? What do you think of yourself?” shouted the others in unison.

“Rub my shell with pitch,  and I will go to the edge of the water and lie down. I will then resemble a stone, so that when Rabbit steps on me his feet will stick fast.”

And in a one, two, three, Tortoise’s shell was covered with pitch, and foot by foot he moved away to the river. At the edge, close to the water, he lay down and drew his head into his shell.

Rabbit during the evening came to get a drink. “Ha!” he chuckled sarcastically, “they are, after all, quite decent. Here they have placed a stone, so now I need not unnecessarily wet my feet.”

Rabbit trod with his left foot on the stone, and there it stuck. Tortoise then put his head out. “Ha! old Tortoise! And it’s you, is it, that’s holding me. But here I still have another foot. I’ll give you a good clout.” Rabbit gave Tortoise what he said he would with his right fore foot, hard and straight; and there his foot remained.

“I have yet a hind foot, and with it I’ll kick you.” Rabbit drove his hind foot down. This also rested on Tortoise where it struck.

“But still another foot remains, and now I’ll tread you.” He stamped his foot down, but it stuck like the others.

He used his head to hammer Tortoise, and his tail as a whip, but both met the same fate as his feet, so there he was tight and fast down to the pitch.

Tortoise now slowly turned himself round and foot by foot started for the other animals, with Rabbit on his back.

“Ha! ha! ha! Rabbit! How does it look now? Insolence does not pay after all,” shouted the animals.

Now advice was sought. What should they do with Rabbit? He certainly must die. But how? One said, “Behead him”; another, “Some severe penalty.”

“It does not affect me,” Rabbit said. “Only a shameful death please do not pronounce.”

“And what is that?” they all shouted.

“To take me by my tail and dash my head against a stone; that I pray and beseech you don’t do.”

It was decided Rabbit should die by taking him by his tail and dashing his head to pieces against some stone. But who is to do it?

Lion, because he is the most powerful one.

Good! Lion should do it. He stood up, walked to the front, and poor Rabbit was brought to him. Rabbit pleaded and beseeched that he couldn’t die such a miserable death.

Lion took Rabbit firmly by the tail and swung him around. The white skin slipped off from Rabbit, and there Lion stood with the white bit of skin and hair in his paw. Rabbit was free.

Produced by Michael Hale, Suzanne Shell and the Online Distributed Proofreading Team at http://www.pgdp.net
Produced from images generously made available by The Internet Archive/American Libraries.The Project Gutenberg EBook of South-African Folk-Tales, by James A. HoneyThis eBook is for the use of anyone anywhere at no cost and with
almost no restrictions whatsoever. You may copy it, give it away or
re-use it under the terms of the Project Gutenberg License included
with this eBook or online at www.gutenberg.netTitle: South-African Folk-Tales