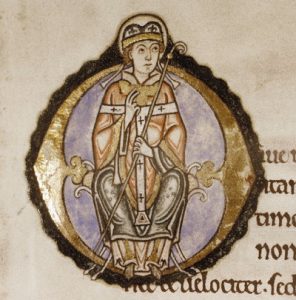 Anselm of Canterbury, 1033-1109 CE,  was a French-born Catholic priest who eventually became the Archbishop of Canterbury in England.  Anselm composed dialogues and treatises with a rational and  philosophical  approach. Despite getting little recognition in this field while he was alive, Anselm is now seen as the originator of the “ontological argument” for the existence of God–“that than which nothing greater can be thought”.  What is the biggest Good you can imagine?  That, says Anselm, is God.

You might enjoy watching the Crash Course video on

Anselm and the Argument for God

The Monologian is the beginning of his argument in favor of the existence of God.  Excerpts are found below.  Start here with our modern definition.  This will help you get a handle on what we as 21st century readers are thinking, before going back to the 11th century!

1:  capitalized : the supreme or ultimate reality: such as

2:   a being or object believed to have more than natural attributes and powers and to require human worship; specifically : one controlling a particular aspect or part of reality

3:  a person or thing of supreme value 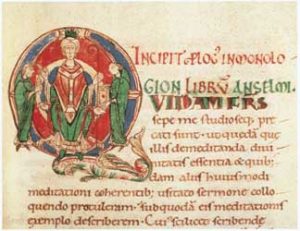 “If any man, either from ignorance or unbelief, has no knowledge of the existence of one Nature which is highest of all existing beings, which is also sufficient to itself in its eternal blessedness, and which confers upon and effects in all other beings, through its omnipotent goodness, the very fact of their existence, and the fact that in any way their existence is good; and if he has no knowledge of many other things, which we necessarily believe regarding God and his creatures, he still believes that he can at least convince himself of these truths in great part, even if his mental powers are very ordinary, by the force of reason alone.

And, although he could do this in many ways, I shall adopt one which I consider easiest for such a man. For, since all desire to enjoy only those things which they suppose to be good, it is natural that this man should, at some time, turn his mind’s eye to the examination of that cause by which these things are good, which he does not desire, except as he judges them to be good. So that, as reason leads the way and follows up these considerations, he advances rationally to those truths of which, without reason, he has no knowledge. And if, in this discussion, I use any argument which no greater authority adduces, I wish it to be received in this way: although, on the grounds that I shall see fit to adopt, the conclusion is reached as if necessarily, yet it is not, for this reason, said to be absolutely necessary, but merely that it can appear so for the time being.

“It is easy, then, for one to say to himself: Since there are goods so innumerable, whose great diversity we experience by the bodily senses, and discern by our mental faculties, must we not believe that there is some one thing, through which all goods whatever are good?”

It is easy, then, for one to say to himself: Since there are goods so innumerable, whose great diversity we experience by the bodily senses, and discern by our mental faculties, must we not believe that there is some one thing, through which all goods whatever are good? Or are they good one through one thing and another through another? To be sure, it is most certain and clear, for all who are willing to see, that whatsoever things are said to possess any attribute in such a way that in mutual comparison they may be said to possess it in greater, or less, or equal degree, are said to possess it by virtue of some fact, which is not understood to be one thing in one case and another in another, but to be the same in different cases, whether it is regarded as existing in these cases in equal or unequal degree. For, whatsoever things are said to be just, when compared one with another, whether equally, or more, or less, cannot be understood as just, except through the quality of justness, which is not one thing in one instance, and another in another.

Since it is certain, then, that all goods, if mutually compared, would prove either equally or unequally good, 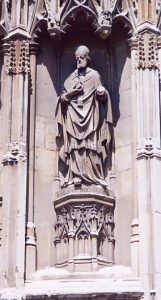 But, since the reasoning which we have observed is in no wise refutable, necessarily, again, all things, whether useful or honorable, if they are truly good, are good through that same being through which all goods exist, whatever that being is. But who can doubt this very being, through which all goods exist, to be a great good? This must be, then, a good through itself, since every other good is through it.

It follows, therefore, that all other goods are good through another being than that which they themselves are, and this being alone is good through itself.

There is, therefore, some one being which is supremely good, and supremely great, that is, the highest of all existing beings.”

Monologion   Translated by Sidney Norton Deane, Associate Professor of Greek, Smith College, Northampton, Massachusetts, who gained his full professorship in 1914. Worked as a curator at the Museum of Classical Antiquities and as Librarian for the college.  Monologion