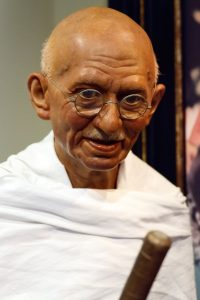 Mohandas Karamchand Gandhi, 1869 – 1948 CE, was an Indian activist who was the leader of the Indian independence movement. Employing non-violent but active civil disobedience, Gandhi led India to independence and inspired various movements for civil rights across the world.

The honorific Mahātmā (Sanskrit: “high-souled”, “venerable”)—applied to him first in 1914 in South Africa—is now used worldwide. Gandhi is unofficially known as the Father of the Nation.

Born and raised in India, and trained in law at the Inner Temple, London, Gandhi first employed nonviolent civil disobedience as a young expatriate lawyer in South Africa, as South Africa’s  Indian population struggled for civil rights. After Gandhi returned to India in 1915, he organized working class and farm-based workers to protest against excessive land-taxes and class discrimination.  By 1921, Gandhi was leading nationwide campaigns in India for various social causes and to achieve self-rule, separate from the British colonial rule.

On March 12, 1930, Gandhi began a march to the sea through India in protest of the British monopoly on salt, his biggest and most visible act of civil disobedience against British rule.  Britain’s Salt Acts prohibited Indians from collecting or selling salt, a necessity in any diet.  People were forced to buy salt from the British, who, in addition to having a monopoly also imposed a heavy tax on salt. This was a hardship on the poor, in particular.  Gandhi declared resistance to British salt policies, and led a march to the sea, where people could collect sea salt for themselves. It took years,  the non-violent protests were met with police and governmental violence, but Indian independence was declared in 1947, and Gandhi was at the head of the movement to achieve this freedom.

Gandhi was assassinated 6 months after India’s independence was achieved.

“There are two ways of countering injustice. One way is to smash the head of the man who perpetrates injustice and to get your own head smashed in the process. All strong people in the world adopt this course. Everywhere wars are fought and millions of people are killed. The consequence is not the progress of a nation but its decline. Soldiers returning from the front have become so bereft of reason that they indulge in various anti-social activities. One does not have to go far for examples. Pride makes a victorious nation bad-tempered. It falls into luxurious ways of living. Then for a time, it may be conceded, peace prevails. But after a short while, it comes more and more to be realized that the seeds of war have not been destroyed but have become a thousand times more nourished and mighty. No country has ever become, or will ever become, happy through victory in war. A nation does not rise that way, it only falls further. In fact, what comes to it is defeat, not victory. And if, perchance, either our act or our purpose was ill-conceived, it brings disaster to both belligerents. But through the other method of combating injustice, we alone suffer the consequences of our mistakes, and the other side is wholly spared. 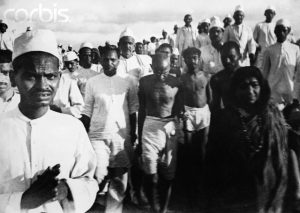 This other method is satyagraha. One who resorts to it does not have to break another’s head; he may merely have his own head broken. He has to be prepared to die himself suffering all the pain. In opposing the atrocious laws of the Government of South Africa, it was this method that we adopted. We made it clear to the said Government that we would never bow to its outrageous laws. No clapping is possible without two hands to do it, and no quarrel without two persons to make it. Similarly, no State is possible without two entities (the rulers and the ruled). You are our sovereign, our Government, only so long as we consider ourselves your subjects. When we are not subjects, you are not the sovereign either. So long as it is your endeavor to control us with justice and love, we will let you do so. But if you wish to strike at us from behind, we cannot permit it. Whatever you do in other matters, you will have to ask our opinion about the laws that concern us. If you make laws to keep us suppressed in a wrongful manner and without taking us into confidence, these laws will merely adorn the statute-books.We will never obey them. Award us for it what punishment you like, we will put up with it. Send us to prison and we will live there as in a paradise. Ask us to mount the scaffold and we will do so laughing. Shower what sufferings you like upon us, we will calmly endure all and not hurt a hair of your body. We will gladly die and will not so much as touch you. But so long as there is yet life in these our bones, we will never comply with your arbitrary laws. ”