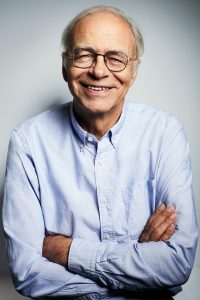 Altruism is a tricky concept in some ways.

1: unselfish regard for or devotion to the welfare of others

2: behavior by an animal that is not beneficial to or may be harmful to itself but that benefits others of its species

Many people would claim to be altruistic–that they help others, give generously, do things that might be a sacrifice of their own well-being, in order to benefit someone else.  But this discussion has been going on for centuries.  The question of whether humans are fundamentally selfish, whether it is even good to sacrifice–these are old conversations.

In this newer take on the issue, Peter Singer is not only affirming altruism, but saying that all of us should live in such a way that we only keep a limited and fairly small portion of what we earn in order to benefit the rest of humanity.  We should choose altruism and make our life’s work aiding others.

This gets into questions of social welfare, of ownership, and back again to that old, old question of whether humans are capable of this kind of giving.  Singer says that we are, and more importantly, we should be altruistic in a very specific way.  Check out this style of Utilitarianism in action.