Wisdom tales from Three North American Tribes:  The Inuit, the Anishinaabe and the Hopi 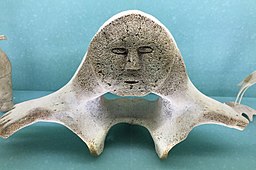 From the Inuit of Greenland:  THE SUN AND THE MOON

The heavenly bodies were once ordinary Eskimos, living upon the earth, who, for one reason or another, have been translated to the skies. The sun was a fair woman, and the moon her brother, and they lived in the same house. She was visited every night by a man, but could not tell who it was. In order to find out, she blackened her hands with lamp-soot, and rubbed them upon his back. When the morning came, it turned out to be her brother, for his white reindeer-skin was all smudged; and  hence come the spots on the moon. The sun seized a crooked knife, cut off one of her breasts, and threw it to him, crying: ‘Since my whole body tastes so good to you, eat this.’ Then she lighted a piece of lamp-moss and rushed out; the moon did likewise and ran after her, but his moss went out, and that is why he looks like a live cinder. He chased her up into the sky, and there they still are. The moon’s dwelling lies close to the road by which souls have to pass to the over-world; and in it is a room for his sister the sun.

From the Anishinaabe: THE FIRE-LEGGINGS

There had been a sudden change in the weather. A cold rain was falling, and the night comes early when the clouds hang low. The children loved a bright fire, and to-night War Eagle’s lodge was light as day. Away off on the plains a wolf was howling, and the rain pattered upon the lodge as though it never intended to quit. It was a splendid night for story-telling, and War Eagle filled and lighted the great stone pipe, while the children made themselves comfortable about the fire.

A spark sprang from the burning sticks, and fell upon Fine Bow’s bare leg. They all laughed heartily at the boy’s antics to rid himself of the burning coal; and as soon as the laughing ceased War Eagle laid aside the pipe. An Indian’s pipe is large to look at, but holds little tobacco.

“See your shadows on the lodge wall?” asked the old warrior. The children said they saw them, and he continued:

“Some day I will tell you a story about them, and how they drew the arrows of our enemies, but to-night I am going to tell you of the great fire-leggings.

“It was long before there were men and women on the world, but my grandfather told me what I shall now tell you.

“The gray light that hides the night-stars was creeping through the forests, and the wind the Sun sends to warn the people of his coming was among the fir tops. Flowers, on slender stems, bent their heads out of respect for the herald-wind’s Master, and from the dead top of a pine-tree the Yellowhammer beat upon his drum and called ‘the Sun is awake—all hail the Sun!’

“Then the bush-birds began to sing the song of the morning, and from alders the Robins joined, until all live things were awakened by the great music. Where the tall ferns grew, the Doe waked her Fawns, and taught them to do homage to the Great Light. In the creeks, where the water was still and clear, and where throughout the day, like a delicate damaskeen, the shadows of leaves that overhang would lie, the Speckled Trout broke the surface of the pool in his gladness of the coming day. Pine-squirrels chattered gayly, and loudly proclaimed what the wind had told; and all the shadows were preparing for a great journey to the Sand Hills, where the ghost-people dwell.

“Under a great spruce-tree—where the ground was soft and dry, OLD-man slept. The joy that thrilled creation disturbed him not, although the Sun was near. The bird-people looked at the sleeper in wonder, but the Pine squirrel climbed the great spruce-tree with a pine-cone in his mouth. Quickly he ran out on the limb that spread over OLD-man, and dropped the cone on the sleeper’s face. Then he scolded OLD-man, saying: ‘Get up—get up—lazy one—lazy one—get up—get up.’

“Rubbing his eyes in anger, OLD-man sat up and saw the Sun coming—his hunting leggings slipping through the thickets—setting them afire, till all the Deer and Elk ran out and sought new places to hide.

“‘Ho, Sun!’ called OLD-man, ‘those are mighty leggings you wear. No wonder you are a great hunter. Your leggings set fire to all the thickets, and by the light you can easily see the Deer and Elk; they cannot hide. Ho! Give them to me and I shall then be the great hunter and never be hungry.’

“OLD-man was glad in his heart, for he was lazy, and now he thought he could kill the game without much work, and that he could be a great hunter—as great as the Sun. He put on the leggings and at once began to hunt the thickets, for he was hungry. Very soon the leggings began to burn his legs. The faster he travelled the hotter they grew, until in pain he cried out to the Sun to come and take back his leggings; but the Sun would not hear him. On and on OLD-man ran. Faster and faster he flew through the country, setting fire to the brush and grass as he passed. Finally he came to a great river, and jumped in. Sizzzzzzz—the water said, when OLD-man’s legs touched it. It cried out, as it does when it is sprinkled upon hot stones in the sweat-lodge, for the leggings were very hot. But standing in the cool water OLD-man took off the leggings and threw them out upon the shore, where the Sun found them later in the day.

“The Sun’s clothes were too big for OLD-man, and his work too great.

“We should never ask to do the things which Manitou did not intend us to do. If we keep this always in mind we shall never get into trouble.

“Be yourselves always. That is what Manitou intended. Never blame the Wolf for what he does. He was made to do such things.

From Wisconsin Public Television, a little history of the Anishinaabe and their oral traditions.  Settlers called these people Ojibwe or Chippewa.  The tribe calls themselves Anishinaabe. 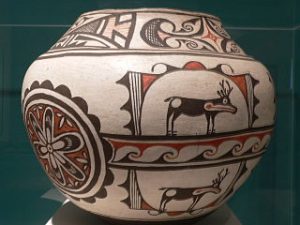 From the Hopi:  THE BEGINNING

“Tochopa was full of sadness at the news. He had one daughter whom he devotedly loved, and from her he had hoped would descend the whole human race for whom the world had been made. If Hokomata persisted in his wicked determination she must be saved at all hazard. So, working day and night, he speedily prepared the trunk of a pinion tree by hollowing it out from one end. In this hollow tree he placed food and other necessaries, and also made a lookout window. Then he brought his daughter, and telling her she must go into this tree and there be sealed up, he took a sad farewell of her, closed up the end of the tree,[210] and then sat down to await the destruction of the world. It was not long before the floods began to descend. Not rain, but cataracts, rivers, deluges came, making more noise than a thousand Hack-a-tai-as (Colorado River) and covering all the earth with water. The pinion log floated, and in safety lay Pu-keh-eh, while the waters surged higher and higher and covered the tops of Hue-han-a-patch-a (the San Franciscos), Hue-ga-wōōl-a (Williams Mountain), and all the other mountains of the world.

“But the waters of heaven could not always be pouring down, and soon after they ceased, the flood upon the earth found a way to rush into the sea. And as it dashed down it cut through the rocks of the plateaus and made the deep Chic-a-mi-mi (canyon) of the Colorado River (Hack-a-tai-a). Soon all the water was gone.

“Then Pu-keh-eh found her log no longer floating, and she peeped out of the window Tochopa had placed in her boat, and, though it was misty and almost dark, she could see in the dim distance the great mountains of the San Francisco range. And near by was the canyon of the Little Colorado, and to the north was Hack-a-tai-a, and to the west was the canyon of the Havasu.

“The flood had lasted so long that she had grown to be a woman, and, seeing the water gone, she came out and began to make pottery and baskets as her father long ago had taught her. But she was a woman. And what is a woman without a child in her arms or nursing at her breasts? How she longed to be a mother! But where was a father for her child? Alas! there was no man in the whole universe!

“Day after day longings for maternity filled her heart, until, one morning,—glorious happy morning for Pu-keh-eh and the Havasu race,—the darkness began to disappear, and in the far-away east soft and new brightness appeared. It was the triumphant Sun coming to conquer the long night and bring light into the world. Nearer and nearer he came, and at last, as he peeped over the far-away mesa summits, Pu-keh-eh arose and thanked Tochopa, for here, at last, was a father for her child. She conceived, and in the fulness of time bore a son, whom she delighted in and called In-ya´-a—the son of the Sun.

“But as the days rolled on she again felt the longings for maternity. By this time she had wandered far to the west and had entered the beautiful canyon of the Havasu, where deep down between the rocks were several grand and glorious waterfalls, and one of these, Wa-ha-hath-peek-ha-ha, she determined should be the father of her second child.

“When it was born it was a girl, and to this day all the girls of the Havasupai are ‘daughters of the water.’ ”

The Project Gutenberg EBook of The Indians of the Painted Desert Region, by George Wharton James

The Project Gutenberg EBook of Indian Why Stories, by Frank Bird Linderman

This eBook is for the use of anyone anywhere at no cost and with almost no restrictions whatsoever. You may copy it, give it away or re-use it under the terms of the Project Gutenberg License included with this eBook or online at www.gutenberg.net

The Project Gutenberg EBook of Eskimo Life, by Fridtjof Nansen

This eBook is for the use of anyone anywhere in the United States and most other parts of the world at no cost and with almost no restrictions whatsoever. You may copy it, give it away or re-use it under the terms of the Project Gutenberg License included with this eBook or online at www.gutenberg.org. If you are not located in the United States, you’ll have to check the laws of the country where you are located before using this ebook.