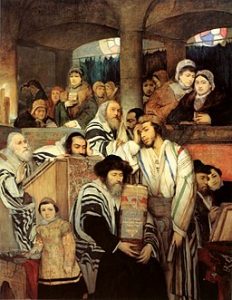 The Baal Shem Tov or Besht, was a Jewish mystical rabbi considered the founder of Chassidic Judaism.  “Besht” is the acronym for Baal Shem Tov, meaning “Master of the Good Name” or “one with a good reputation.” This movement came about in a time of serious persecution of Jews, but also during a time when scholarly Judaism was very focused on minute analysis of scriptures, and was not as focused on the real lives of the poorer Jews who could not send their children to years and years of religious education.  The Baal Shem Tov changed this for many people.

If you would like a little information on this 18th century CE movement, check out The Birth of Chassidism

Lost in the Mail for 16 years

Some 300 years ago, there lived an affluent man named Avigdor. He once brought a large sum of money to Rabbi Israel Baal Shem Tov, the founder of the chassidic movement, to be distributed to the poor on his behalf.

Accepting the contribution graciously, the Baal Shem Tov (literally, “Master of a Good Name”) inquired if perhaps Avigdor would like a blessing in return. After all, the Baal Shem Tov was renowned not only as a great Torah scholar, but also as a righteous individual who had the power to give blessings.

“No thanks!” replied Avigdor arrogantly. “I am very wealthy; I own many properties, and I have servants, plenty of delicacies and everything else I want. I have more than I need!”

“You are very fortunate,” replied the Baal Shem Tov. “Perhaps you would like a blessing for your family?”

“I have a large and healthy family of which I am very proud; they are a credit to me. I don’t need—or want—anything.”

“Well, then perhaps you can help me. May I request one thing of you?” inquired Rabbi Israel. “Can you please deliver a letter to the head of the charity committee in Brody?”

“Certainly,” responded Avigdor. “I live in Brody and would be happy to assist you in this matter.”

The Baal Shem Tov took out a pen and paper, wrote a letter, sealed it in an envelope and gave it to Avigdor. Avigdor took the letter, placed it in his jacket pocket and returned home. But he had so many projects on his mind that by the time he arrived in Brody he had completely forgotten about the entire encounter with Rabbi Israel.

Sixteen years passed, and the wheel of fortune suddenly turned. All of Avigdor’s assets and properties were lost or destroyed. Floods ruined his fields of crops; fires destroyed his forests. Calamity after calamity. He was left penniless.

Creditors took his house and everything he owned. He was forced to sell even his clothing to feed his children. One day, while cleaning out the pockets of an old jacket he planned to sell, he found a letter—the letter that he had received from the Baal Shem Tov 16 years earlier! In a flash, he recalled his visit and his haughtiness when he thought he had everything. With tears in his eyes, he rushed to finally fulfill his mission and deliver the letter. The envelope was addressed to a Mr. Tzaddok, chairman of the charity committee of Brody.

He ran into the street and encountered one of his friends. Grabbing his arm, he said, “Where can I find Mr. Tzaddok?”

“Mr. Tzaddok? You mean Mr. Tzaddok, the chairman of the charity committee?”

“Yes, I must see him immediately!” replied Avigdor.

“He is in the synagogue,” said Avigdor’s friend. “I was there only a few minutes ago. Mr. Tzaddok is indeed a lucky man. Just this morning he was elected chairman of the charity committee.”

Willing to oblige, Avigdor’s friend continued, “Mr. Tzaddok was born and raised here in Brody. A tailor by

profession, he was always down on his luck, never able to make a decent living. He was hardly able to support his family, and they always lived in abject poverty. He sat in the back of the synagogue, and no one ever took notice of him. Despite working many hours, he never earned much; it was hard for him to scrape together enough money for even a loaf of bread for his family.

“Recently, however, the tide changed. Mr. Tzaddok was introduced to a local nobleman, and he made uniforms for all his servants. The nobleman was very satisfied with Mr. Tzaddok’s craftsmanship, and his business started to pick up. He even received an order for 5,000 uniforms for the army. He became a rich man and gained respect in the eyes of the community. He did not forget his former poverty, and gave generously to many, taking an active role in communal affairs. Just this morning, he was unanimously elected chairman of the charity committee.”

Hearing this story, Avigdor hurried to the synagogue and found Mr. Tzaddok busy perusing the many requests for financial assistance. He handed Mr. Tzaddok the letter. Together they read the words of the Baal Shem Tov, penned 16 years earlier:

The man who brought this letter is named Avigdor. He was once very wealthy, but is now very poor. He has paid for his haughtiness. Since just this morning you were elected chairman of the charity committee, I request that you do all you can to assist him, as he has a large family to support. He will once again become successful, and this time he will be more suited to success. In case you doubt my words, I give you the following sign: Your wife is expecting a baby, and today she will give birth to a boy.

They had hardly concluded reading the letter when someone burst into the synagogue and exclaimed, “Mazel tov, Mr. Tzaddok! Your wife just had a baby boy!”

Thanks to the Baal Shem Tov’s foresight, Avigdor once again became very affluent. This time, he remained humble and was admired by all.

He was strong of bone, thick of hide and obstinate of mind, and as all donkeys before him from the dawn of donkey history, he was born into the service of a human master.

His master placed heavy loads on his back — goods and produce to take to the marketplace. But the donkey just stood there, munching grass.

A man walked by and said to the donkey’s master: “What a stubborn beast! Beat him with your whip.” But the donkey just dug his heels deeper into the earth and refused to budge.

Another man walked by and said to the donkey’s master: “Your beast needs to be taught his purpose. His burden is too light — so he thinks that all that’s required of him is to munch his grass.” So they brought more pots and pans and cabbages and books to increase the donkey’s load. The load grew and grew until the donkey collapsed.

A third man arrived and said: “Who needs that silly animal, anyway? You’re much better off without him. All that stuff on his back is quite useless, too, for men of the spirit. Forsake your beast and its load and follow me, and I’ll show you the gateway to heaven.”

Still the donkey’s owner hesitated. He liked his donkey. He also liked his pots and his pans, his cabbages and his books. Perhaps he could carry them himself? But he knew he couldn’t do it on his own.

A fourth teacher arrived on the scene. “Don’t beat your beast,” he said to the donkey’s master. “Don’t overload him and don’t abandon him. Help him.”

“Help him carry his load. Show him that your burden is a shared burden — that it’s not just him doing the shlepping and you reaping the profits, but a joint venture in which you both toil and both benefit. When you regard him as a partner rather than a slave, your beast will be transformed. His obstinacy will become endurance, his strength will turn from a resisting force into a carrying force.”

The man put his shoulder to his donkey’s burden. The beast rose from the ground and tensed its brawn; the man, too, heaved and strained. Together they transported their merchandise to the market.

The content in this page is produced by Chabad.org, and is copyrighted by the author and/or Chabad.org. If you enjoyed this article, we encourage you to distribute it further, provided that you do not revise any part of it, and you include this note, credit the author, and link to www.chabad.org. If you wish to republish this article in a periodical, book, or website, please email permissions@chabad.org.  “Copyright and reprinted with permission of Chabad.org”, April 15, 2018.