“The Dalai Lamas are believed by Tibetan Buddhists to be manifestations of Avalokiteshvara or Chenrezig, the Bodhisattva of Compassion and the patron saint of Tibet. Bodhisattvas are realized beings, inspired by the wish to attain complete enlightenment, who have vowed to be reborn in the world to help all living beings.”

from  The Brief Biography of the 14th Dalai Lama

From the 14th Dalai Lama:  “Because of the great differences in our ways of thinking, it is inevitable that we have different religions and faiths. Each has its own beauty. And it is much better that we live together on the basis of mutual respect and mutual admiration.”   Twitter, February 26, 2018
From the 14th Dalai Lama: “Insofar as the destructive effects of anger and hateful thoughts are concerned, one cannot get protection from wealth nor education. The only factor that can give protection from the destructive effects of anger and hatred is the practice of tolerance and patience.”  Twitter, February 26, 2018 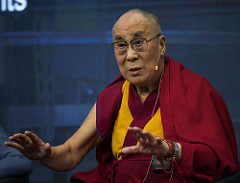 Dalai Lama has spent his entire lifetime working with people across the globe, promoting peace, care of the environment, collaboration, and tolerance.  This shows up in one of his most famous lectures, given on the day of the award of his Nobel Peace Prize in 1989.  Reading through his words gives one a chance to reflect on the character of human beings, and the ways that we function in society.