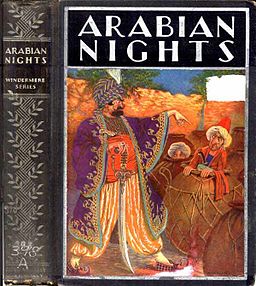 The collection of folktales called  One Thousand and One Nights comes out of the Arabic nations during the Islamic Golden Age. It is known in English as Arabian Nights, from the first English-language edition (1706 AD ).

The work was collected over many centuries by various authors, translators, and scholars, and the tales themselves trace their roots back to ancient and medieval middle eastern folklore and literature. Some even have elements of folklore from India.

What is common throughout all the editions of the Nights is the story framing all the internal tales that starts with the ruler Shahryār and his wife Scheherazade. The stories proceed from this original tale; some are framed within other tales, while others begin and end of their own accord. Some editions contain only a few hundred nights, while others include 1,001 or more.  Some are very long, and some are shorter, and much like other folklore, make a point.

You might enjoy this version from storyteller Jane Ogburn Dorfman[1] at  Montgomery College. 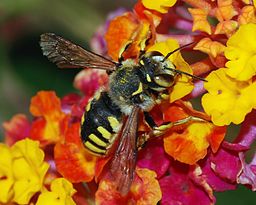 TALE OF THE MOUSE AND THE ICHNEUMON [2]

A mouse and an ichneumon once dwelt in the house of a peasant who was very poor; and when one of his friends sickened, the doctor prescribed him husked sesame. So the hind sought of one of his comrades sesame to be husked by way of healing the sick man; and, when a measure thereof was given to him, he carried it home to his wife and bade her dress it. So she steeped it and husked it and spread it out to dry.

Now when the ichneumon saw the grain, she went up to it and fell to carrying it away to her hole, and she toiled all day, till she had borne off the most of it. Presently, in came the peasant’s wife and, seeing much of the grain gone, stood awhile wondering; after which she sat down to watch and find out who might be the intruder and make him account for her loss. After a while, out crept the ichneumon to carry off the grain as was her wont, but spying the woman seated there, knew that she was on the watch for her and said in her mind, “Verily, this affair is like to end blameably; and sore I fear me this woman is on the look-out for me, and Fortune is no friend to who attend not to issue and end: so there is no help for it but that I do a fair deed, whereby I may manifest my innocence and wash out all the ill-doings I have done.”

So saying, she began to take the sesame out of her hole and carry it forth and lay it back upon the rest. The woman stood by and, seeing the ichneumon do thus, said to herself, “Verily this is not the cause of our loss, for she bringeth it back from the hole of him who stole it and returneth it to its place; and of a truth she hath done us a kindness in restoring us the sesame, and the reward of those who do us good is that we do them the like good. It is clear that it is not she who stole the grain; but I will not cease my watching till he fall into my hands and I find out who is the thief.” The ichneumon guess what was in her mind, so she went to the mouse and said to her, “O my sister, there is no good in one who observeth not the claims 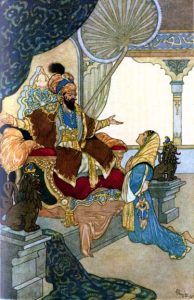 of neighborship and who showeth no constancy in friendship.” The mouse replied, “Even so, O my friend, and I delight in thee and in they neighborhood; but what be the motive of this speech?” Quoth the ichneumon, “The house- master hath brought home sesame and hath eaten his fill of it, he and his family, and hath left much; every living being hath eaten of it and, if thou take of it in they turn, thou art worthier thereof than any other.”

This pleased the mouse and she squeaked for joy and danced and frisked her ears and tail, and greed for the grain deluded her; so she rose at once and issuing forth of her home, saw the sesame husked and dry, shining with whiteness, and the woman sitting at watch and ward. The mouse, taking no thought to the issue of the affair (for the woman had armed herself with a cudgel), and unable to contain herself, ran up to the sesame and began turning it over and eating of it; whereupon the woman smote her with that club and cleft her head: so the cause of her destruction were her greed and heedlessness of consequences.

Then said the Sultan, “O Shahrazad, by Allah! this be a goodly parable! 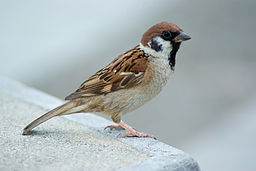 THE SPARROW AND THE EAGLE

I have heard that a sparrow was once flitting over a sheep-fold, when he looked at it carefully and behold, he saw a great eagle swoop down upon a newly weaned lamb and carry it off in his claws and fly away. Thereupon the sparrow clapped his wings and said, “I will do even as this one did;” and he waxed proud in his own conceit and mimicked a greater than he. So he flew down forthright and lighted on the back of a fat ram with a thick fleece that was become matted by his lying in his dung and stale till it was like woollen felt. As soon as the sparrow pounced upon the sheep’s back he flapped his wings to fly away, but his feet became tangled in the wool and, however hard he tried, he could not set himself free. While all this was doing the shepherd was looking on, having seen what happened first with the eagle and afterwards with the sparrow; so he came up to the wee birdie in a rage and seized him. Then he plucked out his wing- feathers and, tying his feet with a twine, carried him to his children and threw him to them. “What is this?” asked one of them; and he answered, “This is he that aped a greater than himself and came to grief.”

THE THIEF AND HIS MONKEY 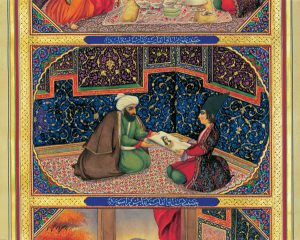 A certain man had a monkey and that man was a thief, who never entered any of the street-markets of the city wherein he dwelt, but he made off with great profit. Now it came to pass one day that he saw a man offering for sale worn clothes, and he went calling them in the market, but none bid for them and all to whom he showed them refused to buy of him. Presently the thief who had the monkey saw the man with the ragged clothes set them in a wrapper and sit down to rest for weariness; so he made the ape sport before him to catch his eye and, whilst he was busy gazing at it, stole the parcel from him. Then he took the ape and made off to a lonely place, where he opened the wrapper and, taking out the old clothes, folded them in a piece of costly stuff. This he carried to another bazar and exposed for sale together with what was therein, making it a condition that it should not be opened, and tempting the folk with the lowness of the price he set on it. A certain man saw the wrapper and its beauty pleased him; so he bought the parcel on these terms and carried it home, doubting not that he had done well. When his wife saw it she asked, “What is this?” and he answered, “It is costly stuff, which I have bought at lowest price, meaning to sell it again and take the profit.” Rejoined she, “O dupe, would this stuff be sold under its value, unless it had been stolen? Dost thou not know that whoso buyeth aught without examining it, falleth into error and becometh like unto the weaver?”

Quoth he, “And what is the story of the weaver?”; and quoth she:—I have heard this tale of 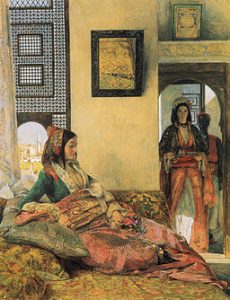 There was once in a certain village a weaver who worked hard but could not earn his living save by overwork. Now it chanced that one of the richards of the neighbourhood made a marriage feast and invited the folk thereto: the weaver also was present and found the guests, who wore rich gear, served with delicate viands and made much of by the house-master for what he saw of their fine clothes. So he said in his mind, “If I change this my craft for another craft easier to compass and better considered and more highly paid, I shall amass great store of money and I shall buy splendid attire, so I may rise in rank and be exalted in men’s eyes and become even with these.” Presently, he beheld one of the mountebanks, who was present at the feast, climbing up to the top of a high and towering wall and throwing himself down to the ground and alighting on his feet. Whereupon the waver said to himself, “Needs must I do as this one hath done, for surely I shall not fail of it.” So he arose and swarmed upon the wall and casting himself down, broke his neck against the ground and died forthright. “Now I tell thee this that thou sayst get thy living by what way thou knowest and thoroughly understandest, lest peradventure greed enter into thee and thou lust after what is not of thy condition.” Quoth the woman’s husband, “Not every wise man is saved by his wisdom, nor is every fool lost by his folly. I have seen it happen to a skillful charmer, well versed in the ways of serpents, to be struck by the fangs of a snake and killed, and others prevail over serpents who had no skill in them and no knowledge of their ways.” And he went contrary to his wife and persisted in buying stolen goods below their value till he fell under suspicion and perished therefor.

Title: The Book of the Thousand Nights and a Night, Volume 3