The Revolution That Wasn’t by Jen Schradie

Eight years ago, when Occupy Wall Street protests and the Arab Spring used social media to organize and publicize protests against economic inequality and state oppression, it seemed the internet was on the side of youthful progressivism and liberal change. Mark Zuckerberg made that a point as he took Facebook public (while taking care to retain personal control over the company):

There is a huge need and a huge opportunity to get everyone in the world connected, to give everyone a voice and to help transform society for the future … People sharing more — even if just with their close friends or families — creates a more open culture and leads to a better understanding of the lives and perspectives of others. We believe that this creates a greater number of stronger relationships between people, and that it helps people get exposed to a greater number of diverse perspectives.

By helping people form these connections, we hope to rewire the way people spread and consume information. We think the world’s information infrastructure should resemble the social graph — a network built from the bottom up or peer-to-peer, rather than the monolithic, top-down structure that has existed to date.

The statement jumbles together changing the world through authentic person-to-person communication with discovering the “best products and services,” which, to be fair, might have been more important to investors than rewiring social relationships, but also seems to imply shopping and marketing are the apex of our human activities. But it also presages the jumbling of political persuasion with targeted sales techniques — and look where that has gotten us. 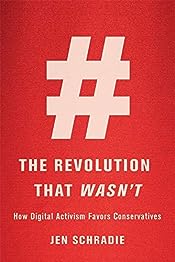 In spite of the circa-2011 belief that communicating via social media would topple hierarchies and give ordinary people the power to change society and foster equality, things didn’t play out that way. As scholars like Zeynep Tufekci have pointed out, authoritarian states can use social media, too. Then came the Brexit referendum and the 2016 U.S. election, and we realized the powers of persuasion, unregulated, have changed our political landscape profoundly (though those changes actually predate social media through the rise of talk radio and Fox News; many of us simply didn’t pay much attention to what we didn’t personally consume). Jen Schradie, a sociologist and assistant professor at Sciences Po in France, tackles this shift in her book, The Revolution That Wasn’t: How Digital Activism Favors Conservatives. The right is simply better at this than the left, and Schradie’s study explores why that is.

Between 2011 and 2014, she conducted a multimethod field-level study of over 30 groups that were involved in a fight for collective bargaining rights for public-sector employees in North Carolina. These ranged from grassroots Tea Party groups to established conservative political organizations to a variety of unions and left-wing progressive groups. Much research in this arena looks at how digital platforms shape social movements, but she reversed that relationship to see how social factors affect internet use. Four key factors come into play: access to technology, skills to use it, a sense of empowerment and enough time to devote to the care and feeding of websites and social platforms. Though the Black Lives Matter movement used social media effectively, Schradie argues that was an outlier for left-wing activism. Class and age are factors in how successfully a group could use digital tools: those with more education, more access to computers and time to spend on social media have an edge. If you run through the data plan on your phone before the month ends and don’t have home internet, if you have never used social media and don’t know anyone who does, if you’re working two jobs and spending most of your free time trying to get from one to another, the internet will be less use to you than existing social ties through churches or friends and family relationships. So most of the organizing on the left end of the spectrum had to reach people face-to-face, often having to update contact lists as people moved or dropped phone plans, and didn’t have much of a public presence online because nobody had the time or skills to keep a web presence up-to-date. Besides, if you are worried about losing your job because you’re agitating for a union, you don’t want to be publicly identified.

Contradicting the classic appeal of the internet as a leveling, democratizing force, Schradie found more hierarchically organized groups made better use of internet tools than nonhierarchical groups. Horizontal or leaderless organizations tended to focus on building trust through face-to-face meetings and eschewed centralized communication strategies. Ideology was another key factor. On the right, the fight was for freedom, and digital evangelists used the internet to get their truth out there, feeling their take on reality had been ignored or distorted by the press. This gave grassroots organizations like the Tea Party something in common with more traditional and well-funded conservative organizations; a constellation of right-wing outlets shared messages about their truth, amplifying it. On the left, the fight was for fairness, a much harder concept to agree on. There was more inward-focused negotiation among organizations, an aversion to making disagreements public and less of a coherent message across them.

“The media’s focus on the use of technology by left-wing protest movements had people looking in one direction while a wave was cresting from just outside their field of vision,” Schradie writes. Though she doesn’t speculate whether digital activism influenced the 2016 election, she does question the assumption that the internet favors grassroots and leaderless movements. It turns out wealth, power, a compelling message and strong institutional ties matter. She comes to the same conclusion as the authors of Network Propaganda — that the rise of the right wasn’t influenced as much by filter bubbles and digital architectures as it was a case of Trump benefiting from a strong belief systems and “an information wave among conservatives that had been building for years.”

The age of digital utopianism seems to be at its twilight. In the long night ahead, digital activists of all stripes will try to seize the internet’s potential for their cause. If the digital activism gap continues to widen, the dawn will bring an age where only some citizens can make their voices heard. That would not just snuff out the dream that technology can be a force for progress; it would extinguish the possibility of a truly democratic society.

I found it a fascinating book that adds new insights to our understanding of the information landscape we live in today, one that focuses more on people than on tech. For another, more learned take on this book, I recommend @librarianshipwreck’s (aka Zachary Loeb’s) review in boundary2.