I’m reading Evicted: Poverty and Profit in the American City by urban ethnographer and extraordinarily fine writer Matthew Desmond. It’s a model of narrative non-fiction and ethical story-telling about people whose lives belong to them but whose stories reveal a lot about exploitation, poverty, and the complexity of untangling the multiple strands that go into a social problem. It’s hard to get 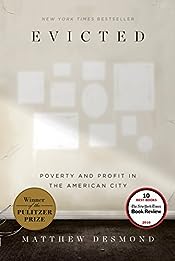 that balance right – communicate stories without manipulating either the reader or the subjects. Desmond shows how to tell such stories respectfully and with empathy, somehow magically bringing us inside the circle of lives that are not ours, inviting us to do the work of understanding rather than telling us what to think. I’m not even halfway through yet, but it’s brilliant, and I love the way he weaves something of a journalistic sensibility (for example, pointing out that when he didn’t personally witness something, he confirmed it with multiple sources) with scholarship (e.g. “this experience I’ve just described is consistent with the findings of these studies”). My daughter, who recommended it to me, says she’ll have to read it twice. She knows the footnotes are valuable, but the narrative is so compelling she doesn’t want to break away and look at them this time around.

It’s not easy to write this well, to combine edge-of-your-seat narrative momentum with scholarly rigor. Not only is it not easy, but we’re schooled to write in an inaccessible style, as if our ideas are somehow better if written in a hard-to-decipher script that only the elite can decode because if people who haven’t been schooled that way can understand it, it’s somehow base and common, not valuable enough. If you’re able to read this message, welcome! You’re one of us. The rest of you are not among the elite, so go away.

Even worse, we think our hazing rituals around publication and validation are more important than the subjects of our research, who couldn’t afford to read it even if we chose to write in a manner that didn’t require an expensive decoder ring with a university seal on it. We say “it’s for tenure” or “that’s the best journal” and think that’s reason enough to make it impossible for people without money or connections to read it.

I don’t know how else to put this: it’s immoral to study poor people and publish the results of that study in journal run by a for-profit company that charges more for your article than what the household you studied has to buy food this week. I cannot think of any valid excuse for publishing social research this way.

Because you don’t have to. SocArXiv makes it easy to share your research. Your institution may have a public research repository. There are open access journals that don’t charge authors and have the same peer review standards as other journals. You can reserve the right to share your work, and we’re finding sustainable ways to fund public knowledge. Will it take a little more of your time? Yeah, it’s a cultural shift, which is obviously complex, and you’re so busy.

But if you actually think your research matters, if you think research could make people’s lives better, if you use the phrase “social justice” when you describe your work, you should take that time. It’s unethical not to.

I realize I’m scolding. I’m shrill. I’m being disrespectful. I know it’s more complicated than that. But I also know the tangled systems that put families on the streets are complicated, too, and I have this absurd idea that social scientists and good people working to make a difference could help disentangle those systems. If your research isn’t accessible, it’s not a solution, it’s part of the problem.

Oh, and . . . you should also take the time to read this book. Yeah, it costs nearly as much as an article from a social science journal, but it’s probably on the shelves of a library near you.