I’ve been trying to scale Mount To Be Read on my bedside table to balance my diet of breaking news, most of it catastrophic and dramatic. (A tip for those who face a similar struggle: I deleted Twitter from my phone, and it’s astonishing how much time that has added for reading longer form texts – and how much it has helped me relax at night.) Today I realized how much the two books I most recently finished have helped me make sense of the news – not the events themselves, but the ways they are covered by the media and the ways they are circulated and amplified on social media.

First there was the catastrophe of Hurricane Maria, hard on the heels of Texas and Florida being hit. It’s a hard story for journalists to cover. Getting around is difficult, and grasping the daily lived experience of nearly four million American citizens living in Puerto Rico and the US Virgin Islands who can’t participate in federal elections and are frequently forgotten makes it even harder because there’s not a general public knowledge base to build on. You have to start with “yes, these are Americans.”

(While I haven’t heard this point made in news broadcasts, it seems important that Puerto Rico and the US Virgin Islands have a larger population than 21 of our states and more than the population of Wyoming, Vermont, Alaska, North Dakota, and South Dakota added together. Imagine if Puerto Rico and the US Virgin Islands had 10 senators. Or if the District of Columbia, which has a higher population than either Wyoming or Vermont, had two. No wonder we forget these people are Americans – they’re literally disenfranchised, and they are mostly not what we consider white folks: “Hispanics” can be white or black according to the way we conduct our census, but we mostly think of them as not white.)

That’s all background that is not well known but hard to fit into a broadcast news segment. You also have to work pretty hard to get the visuals broadcast news depends on if the roads are blocked and the airports are struggling to land planes.  On top of that, broadcasters don’t have the wealth of social media imagery to draw on. Most of the cell towers were knocked out and power remains off for most of the residents and will be out for months to come. The more journalism relies on social media streams, the more likely whole parts of the planet will vanish from our awareness. The only thing that seems to keep it at the forefront is the non-stop coverage of the president’s tweets attacking the mayor of San Juan and Puerto Rico for being poor and in debt. His pals on Wall Street are not too happy with him for casually saying we should erase that debt – something that actually makes sense, but dollars carry more weight and financial institutions have a huge impact on public policy. 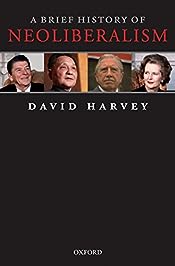 If you’re wondering how government got so caught up in the well-being of Wall Street, I have a book for you: A Brief History of Neoliberalism by David Harvey. I had a basic understanding of what neoliberalism is, and have sometimes winced at how liberally it’s sprinkled about as the root of most evil. But it’s a fundamentally powerful influence on our economic and political life as well as our everyday experience, and I’m grateful to the author for helping me understand how we got here – and how market behavior isn’t a fundamental law of the universe but an influential part of our recent intellectual history. In the 1970s, businesses and financial institutions began to organize themselves to fight for their interests. They did so through making existing organizations like the US Chamber of Commerce more powerfully political in furthering their mission. Even the Nobel Committee got into the act, recognizing American economists who have put their stamp our world through their talismanic belief in the wisdom of markets. (Though we tend to see Sweden as a socialist worker’s paradise, Sweden has a traditionally powerful wealthy class that wields influence in high places and wanted to dethrone post-Keynesianism.) They built entire financial industries and financialized existing industries that capitalized on distrust of government and America’s traditional reverence toward individual rights. They were able to refashion the state’s purpose: rather than provide social welfare programs, it should create healthy conditions for businesses to thrive, which should in turn would trickle down to benefit society, though that’s proven less reliable than the trickles of springs that people in Puerto Rico rely on for drinking water right now. So many of our current debates – health care, infrastructure, environmental protection, creating jobs that pay enough to live on – were illuminated for me by this accessible and informative book.

Contrast coverage of Hurricane Maria’s devastation to our latest record-setting mass murder. The coverage is non-stop, with constant questions about how high-capacity high-powered weapons work and what made one man with so much firepower decide to kill so many people. It’s enough to make any number of well-armed and angry hyper-masculine men think they could be famous, too. Fame is a motive, and our media response (and audience craving for sensation and sentimentality) feeds it. It’s much easier to get film of what happened in Las Vegas than in Puerto Rico and the US Virgin Islands: We have video of the event taken from numerous phones. We have reconstructions of the shooter’s hotel room. We also have free-lance profilers speculating about the killer’s mind, which is something our true crime genres continually invite us to enter as a form of ghoulish entertainment. We have affirming stories of people behaving heroically.

(And because we can’t talk about controlling guns because policy talk interferes with our immediate focus on the killing and the killed, we have an inheritor of the nuclear attack drills I grew up with. Schoolkids are being  drilled on how to respond to an “active shooter event.” This is the new normal that makes no more sense than mutually-assured destruction as an anxious simulacrum for peace.)

The Las Vegas murders not only have true crime phone-cinema verité, it has the usual outbreak of gossip and disinformation. Isis immediately claimed responsibility because – why not? It fits their social media strategy beautifully and at zero cost. 4channers started investigating, and claims about a 4channer’s ex leaked into mainstream social media, topping the news, algorithmically evading correction because popularity and currency trumps accuracy, which is harder to measure. For hours after police identified the killer, an innocent man’s name appeared as the shooter in Google results, on Twitter, and on Facebook’s “safety check” page. These systems, which are now a major part of our news infrastructure, was designed to sensationalize everything to gather information about people and push ads. Their only ethics are the bottom line, and the mitigation of harm is more about protecting the brand than the public good. Gossip and lies move faster and further than journalism and judgement and they’re far more profitable. 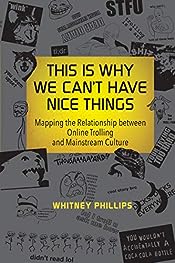 Another book languishing on my “to be read” list for too long explained a lot of this to me. Whitney Phillips’ This is Why We Can’t Have Nice Things: Mapping the Relationship Between Online Trolling and Mainstream Culture reports on years of being embedded in the spaces where troll culture developed and thrived. Now appropriation seems to be making old trolls nostalgic about the past, before memes went mainstream and the the outrage market online became dominated by Infowars and Breitbart, pushing their tasteless pranks out of the spotlight. What’s revealing about hanging out with trolls (as Gabriella Coleman did for another study with a different focus) is that they thrived on the same sensationalism and shock that is increasingly the modus operandi for cable news and social media clicks. Those cute Advice Dog memes? They came from 4chan trolls. That sense of outrage that drives so many of us to spend too many hours with our closest online pals criticizing others? That’s the same desire to bond over poking others with sharp sticks that animated troll culture. The trolls’ vicious attacks on women and political correctness and their imperial sense of permission to do whatever they want? That’s part of traditional American culture. There are two intriguing points Phillips makes that I’ll try to summarize in two quotes:

“Trolls certainly amplify the ugly side of mainstream behavior, but they aren’t pulling their materials, chosen targets, or impulses from the ether. They are born of and fueled by the mainstream world – its behavioral mores, its corporate institutions, its political structures and leaders – however much the mainstream might rankle at the suggestion.” And “trollish play with tragedy is what happens when current events become content, a term frequently (and cynically) used in the blogosphere to describe the various bits of digital stuff that may be shared, remixed, and of course monetized through advertisements . . . trolls embody and in fact are grimacing poster children for the more ambivalent aspects of socially mediated web culture, namely objectification, selective attachment, and pervasive self-involvement.”

Regardless of whether we cross paths with trolls, our media environment has been shaped by the same impulses and by the same affordances of value measurement by clicks and shares, just as our responses to disasters is shaped by an economic policy framework that has changed our relationship with our governments and with one another as citizens. I’m glad I read these two books. Not only do they explain a lot, reading a chapter or two at night instead of streams of breaking news and heated opinion is helping me break bad habits.