Happy day after labor day. If you’re sitting at a desk in your office, there’s a chance it was made by someone making two dollars an hour or less. Much less.

Of course, maybe you don’t have an office because you’re part of the majority of academic labor that is hired by the course or has a long-term non-permanent gig. But if you stop by, say, the Minnesota History Center or a major public university library to do some research, there’s a good chance you’re sitting at a table made by someone who’s incarcerated and paid far less than minimum wage.

If you watch California fires raging and feel for the heroic men and women on the front lines, carrying heavy equipment and wearing hot gear in 100-plus degree weather, bear in mind many of them are paid a dollar a day. They are incarcerated “volunteers.” This is part of what a national prison strike is about. You might have heard about it, but possibly not; it hasn’t gotten much coverage.

You could argue that prison industries are a good thing because incarcerated people learn skills and work habits. It’s too bad that when they’re released they often can’t get a job because they have a criminal record. They probably don’t even get a chance to discuss with a human being what they learned while working in prison because a computer system kicked their application to the bottom using an algorithm. Chances are another algorithm will send them back to prison if they fail to adhere to parole requirements, like failing to have a job or permanent address or ability to pay for their parole expenses. 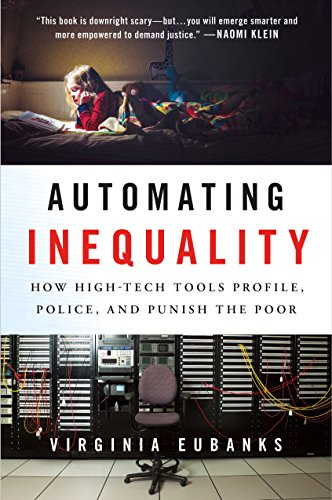 As it happens, I just finished reading Automating Inequality How High-Tech Tools Profile, Police, and Punish the Poor by Virginia Eubanks. I was especially curious about the algorithms used in social services, but it’s not just about technology, it’s a brilliant book about how we penalize poverty. It would make a great pairing with Evicted: Poverty and Profit in the American City by Matthew Desmond. Both books make it clear how badly shredded our social network is and how well hidden poverty is now that it’s treated as a personal failing rather than as a social issue we should solve because it’s bad for all of us, unnecessary in the richest nation on earth, and unjust.

Eubanks focuses her research in three locations: a failed approach to automate public benefits eligibility determination in Indiana that nevertheless managed to permanently remove many people eligible for benefits from getting help; an app for deciding who among the thousands of homeless in Los Angeles could get processed into housing; and a flawed system in Pennsylvania for deciding which children are at risk and should be removed from their homes. These attempts (with the exception of the first, which appears primarily a mean-spirited system for punishing the poor) are generally well-meant, but tackle the wrong problems. There’s a housing crisis in Los Angeles and across the country, and deciding who to shuffle into a limited number of shelter beds or subsidized housing doesn’t do anything to address that crisis. The algorithm implemented in Pennsylvania does a pretty good job of measuring the effects of poverty, but nothing to help children subject to abuse or neglect in households that aren’t already implicated in state systems because they receive benefits from Temporary Assistance for Needy Families or the Supplemental Nutritional Assistance Program. Wealthier families that experience problems that lead to child neglect don’t have public data gathered on them that might predict whether a child should be removed from the household. An employee of the company building this predictive system told Eubanks it would great to include data from babysitters, therapists, or rehab centers, but nobody on earth would agree to have such personal information gathered by the government. The poor have no choice but to be monitored, measured, and sorted, and now we do it with computers.

Eubanks frames this system in our history – first the poorhouse, then scientific charity, now a digital poorhouse that isolates and punishes using supposedly “unbiased” systems that are trained with biased data.

Like the brick-and-mortar poorhouse, the digital poorhouse diverts the poor from public resources. Like scientific charity, it investigates, classifies, and criminalizes. Like the tools birthed during the backlash against welfare rights, it uses integrated databases to target, track, and punish . . .

However, there are ways that the analogy between high-tech tools in public services and the brick-and-mortar poorhouse falls short. Just as the county poorhouse was suited to the Industrial Revolution, and scientific charity was appropriate for the Progressive Era, the digital poorhouse is adapted to the peculiar circumstances of our time. The country poorhouse responded  to middle-class fears about growing industrial unemployment: it keeps discarded workers out of sight but nearby, in case their labor was needed. Scientific charity responded to native elites’ fear of immigrants, African Americans, and poor whites by creating a hierarchy of worth that controlled access to both resources and social inclusion.

It’s nearly invisible, scalable, persistent, isolating, and will, in time, embrace all of us as webs of sticky personal data are woven around our lives.

Because of Labor Day, the Washington Post profiled a photographer whose works illuminated the hard lives of working children and made people care. I chose one of those photos for my personal website, not knowing much about it but because it’s beautiful and poignant – a girl turned away from a giant mechanical loom to gaze out a window. Lewis Hine had to fake his way into factories and fields to document child labor in photos like this one, and the human stories those photos told helped launch a movement to end it.

It’s hard to get inside and take pictures of the trade-secret digital poorhouse, but Automating Inequality does a great job of showing why we need to pay attention and unite in fighting economic and political systems that keep too many of us either in or just one medical emergency or job loss from isolating, humiliating, quantified poverty.