Last March, I read Alice Marwick’s Status Update, a fascinating ethnographic account of Silicon Valley culture and how entwined that culture is in the design of the social media platforms that we use daily. It’s a world that presumes good things come to those who are smart and work hard and, within this meritocracy, everyone’s an entrepreneur with a personal brand to develop. 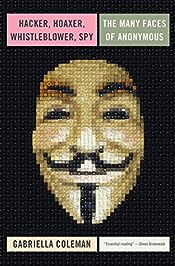 I’ve just finished reading another ethnography that provides a fascinating counterpoint. Gabriella Coleman, a cultural anthropologist at McGill University, has been studying Anonymous since 2008 and has a terrific book coming out this November from Verso, Hacker, Hoaxer, Whistleblower, Spy. Members of Anonymous and the tech workers who created Twitter, Facebook, and many other hot tech brands have some things in common. They resist hierarchy and value individuality. They socialize and develop projects using Internet channels. They aren’t intimidated by established institutions and resist government control.

But there’s a fundamental difference. The culture Marwick studied values aggregating wealth and attention. Anonymous abhors personal attention-seeking as a means of accumulating capital. While Marwick showed a culture that assumed individual striving could lead to entrepreneurial success, a form of success created by capturing data about social interactions online, the portrait Coleman develops of Anonymous is an anarchic collective that subsumes individuality to the pursuit of lulz (deviant humor) and the free flow of information. In a sense, it’s the free-wheeling ethos of the old Internet at war with the new, one that is dominated by giant companies that determine the rules about how we will interact online and promote personal branding to conduct monetizable surveillance. Remember the New Yorker cartoon, “on the Internet, nobody knows you’re a dog?” Now corporations operating through the internet not only know who you are, they know what brand of dog food you buy.

Coleman’s book starts with the disreputable roots of the Anonymous collective in the boisterous trolling conducted on 4Chan, which embraced anonymity and practiced extreme Rabelaisian permissibility. In a sense it was the “primordial stew” that gave rise to a movement that is characterized by deviance that is carnivalistic in the Bakhtinian sense and yet has a strongly moral bent when it comes to free speech. For an anthropologist, the self-organizing complexity of this constantly morphing group is a fascinating puzzle. Its anti-celebrity ethos, which also values individual rights, upends “the ideological divide between individualism and collectivism” while presenting an alternative approach to the society itself.

Anonymous began to recognize its potential as a political force when some members suggested their collective trolling power should be directed at the Church of Scientology, which was using strongarm tactics to suppress a video they objected to. Mass trolling worked. Coleman was able to observe how that initial protest came together and how it set the stage for other forms of dissent, including attacks against banks that tried to cripple WikiLeaks by cutting off access to donations. Anonymous began to take on other political causes. It (they?) played a significant role in the opening weeks of the Arab Spring and launched other actions, including some that have backfired, such as the recent release of an incorrect name when protestors at Ferguson demanded to know which officer shot Michael Brown.  These actions are often what one Anon called a “moral pretzel,” very similar to the ethical issues that come with any disruptive political direct action, but with greater legal consequences. And like any protest movement that gets the attention of the authorities, it is subject to infiltration by informants and agents provocateurs.

Coleman does a fantastic job of chronicling Anonymous’s political turn while explaining her own moral pretzels as a researcher. She illuminates a movement that bucks the cultural trend to self-promote and examines the “fractal chaos” of a leaderless collective that is deliberately hard to pin down but looks a little bit like the Internet when it was young.

Reading studies like this and Marwick’s Status Update make me impatient to figure out how to better prepare our students to engage in the world by understanding the structures of information that are evolving around us. While students need to recognize what scholarship looks like so that they can learn about the ethical practices underlying scholarly discovery, the world of information exhibits its own fractal chaos that makes the oversimplified categories “scholarly” and “popular” misleadingly naive. That said, this book demonstrates how valuable it is to have scholars studying phenomena like the emergence of Anonymous as a radically collective political force

Hacker, Hoaxer, Whistleblower, Spy won’t be released until November, but meanwhile you can read some of Coleman’s articles about Anonymous in Wired, the Index on Censorship and elsewhere.