Permanent Record by Edward Snowden
It’s curious that we’ve become so reconciled with the massive amount of state secrets we learned about when Edward Snowden worked with journalists to expose its vast extent and power in 2013. Since then, he’s lived in exile almost as long as he worked for the US intelligence services, helping to build a system that would capture, store, and make searchable the digital traces of communications of the entire world, an all-encompassing shift from targeted to mass surveillance. Yet we’ve become somehow used to the idea, defensively forgetting that nearly everything we do is not forgotten. 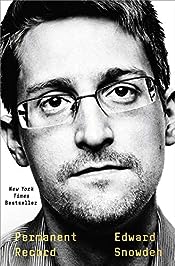 Snowden’s memoir, Permanent Record, doesn’t reveal any state secrets he hasn’t already selectively shared with the world. It doesn’t tell us anything about how he got those secrets out that hasn’t already been covered in Laura Poitras’s film, Citizenfour. It’s more personal and reflective. It explains how he became entranced by technology and the internet, how he ended up following a family tradition by working for the government, which meant in practice working for private companies, how he became alarmed by the systems people like him were building, and why he decided he had a moral duty to the country he served to share what he knew with journalists to get the word out. It’s a portrait of a young geek who grew up close to the beltway and in the shadow of 9/11, so he signed up to serve rather than become a silicon valley entrepreneur. After an accident sidelined him from the military before he was out of training, he decided to follow his parents’ footsteps and get a security clearance so he could apply his tech skills to government service.

He describes the anxiety around having his past scoured as he was vetted at age 22 as a way to explore the implications of all the traces we leave behind, juvenile beliefs long shed, jokes that aren’t funny anymore, now all part of our permanent record. But he passed easily and that not only gave him a chance to get a job with the government, it made him attractive to contractors. Those give the agencies a workforce by allowing them to circumvent legal caps on the number of government employees. (As in higher ed, it’s easier to get money to pay for commercial services than to hire people.) “It’s America’s most legal and convenient method of transferring public money to the private purse,” he writes. Soon after he got his clearance he realized he couldn’t serve his country unless he worked for the private sector, which is where high-level systems work is done. And it was being done by “computer dudes” like him. At an “indoc” orientation they were told they were special, the elite, which struck him as odd.

You don’t need to tell a bunch of computer whizzes that they possess superior knowledge and skills that uniquely qualify them to act independently and make decisions on behalf of their fellow citizens without any oversight or review. Nothing inspires arrogance like a lifetime controlling machines that are incapable of criticism.

This,  to my thinking, actually represented the great nexus of the Intelligence Community and the tech industry: both are entrenched and unelected powers that pride themselves on maintaining absolute secrecy about their developments. Both believe that they have the solutions for everything, which they never hesitate to unilaterally impose. Above all they both believe that these solutions are inherently apolitical, because they are based on data, whose prerogatives are regarded as preferable to the chaotic whims of the common citizen.

Within a few short years he was in a position to see how the entire system operated, and what he saw threw him into a moral crisis. Eventually he decided the only way he could serve the nation would be to expose what was going on, whatever the personal cost. Toward the end of the book, he shifts from memoir to an argument for why privacy matters. It matters because “any elected government that relies on surveillance to maintain control of a citizenry that regards surveillance as anathema to democracy has effectively ceased to be a democracy.”

But it’s not just the state that uses surveillance for control. Both government and businesses exploit our permanent records.

Algorithms analyze it for patterns of established behavior in order to extrapolate behaviors to come, a type of digital prophecy that’s only slightly more accurate than analog methods like palm reading . . . its science is, in fact, anti-scientific, and fatally misnamed: predictability is actually manipulation…

We can’t permit our data to be used to sell us the very things that must not be sold, such as journalism. If we do, the journalism we get will be merely the journalism we want, or the journalism the powerful want us to have, not the honest collective conversation that’s necessary. We can’t let the godlike surveillance we’re under be used to “calculate” or citizenship scores, or to “predict” our criminal activity; to tell us what kind of education we can have, or what kind of job we can have, or whether we can have an education or a job at all; to discriminate against us based on our financial, legal, and medical histories, not to mention our ethnicity or race, which are constructs that data often assumes or imposes. And as for our most intimate data, our genetic information: if we allow it to be used to identify us, then it will be used to victimize us, even to modify us – to remake the very essence of our humanity in the image of the technology that seeks its control.

Of course all of the above has already happened.

Permanent Record is both a memoir of growing up with technology and an argument for breaking the law as an act of moral patriotism.

As for me, I’m interested in data privacy as a condition for intellectual freedom because that’s stuff librarians care about. The implications of digital record-keeping and prediction are inescapable. We’ve become so inured to these systems we use them for enrollment management – this Washington Post article about it is chilling. Learning analytics, too, have the potential to be invasive in ways that fail to respect students’ agency and right to self-determination. I recently had a chance to pose some questions to Kyle Jones, the PI for the Data Doubles project, and his answers made for interesting reading in tandem with Snowden’s warnings.

We have choices to make. Deciding we don’t have a choice is the easy way out, but it would be a terrible mistake.