I have finally finished reading Shoshana Zuboff’s epic book, The Age of Surveillance Capitalism. It’s an impressive work that ties together a lot of trends into a very spooky picture of where we are headed when intimate data about each of us is used as the raw material for prediction and control. 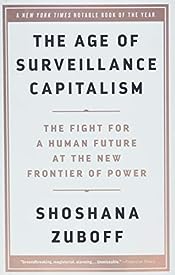 What started as search and social platforms without much of a business model were transformed by the accidental discovery that the data trails we leave behind whenever we go online – “behavioral surplus” – is extraordinarily valuable. The more engaged we are online, the more these companies know about us, and the more they know, the more they can sell predictions of our behavior for people who want to modify it. The old saw about free platforms – if it’s free, you’re the product – isn’t quite true. You’re not the product, you’re the site of raw material extraction, and that extraction isn’t just to sell ads, it’s to provide the means of control to anyone who will profit from it.

That Fitbit your employer paid for? It feeds information to insurers that can use to change your behavior and reduce costs – or charge you more if you don’t comply. Google drove into our neighborhoods with camera-equipped cars to capture images of our communities and create detailed maps that will be useful for routing their self-driving cars and even planning entire cities where everything will be connected and everyone’s life experience moment by moment can be rendered as data. As Zuboff puts it, “It’s not the car; it’s the behavioral data from driving the car. It’s not the map, it’s the behavioral data from interacting with the map. The ideal here is continuously expanding borders that eventually describe the world and everything in it, all the time” (132).

We tend to think of this as an invasion of personal privacy, but to Zuboff this is a stealth usurpation of our freedoms. By insinuating themselves into our lives and keeping their operations and goals secret, these capitalists use interventions to “nudge, tune, herd, manipulate, and modify behavior in specific directions by executing actions as subtle as inserting a specific phrase into your Facebook news feed, timing the appearance of a BUY button on your phone, or shutting down your car engine when an insurance payment is late” (202). As they roll out wearable devices, “smart” homes, and “smart” cities all designed around capturing and using data, we will have no places of refuge. We’ll be nudged relentlessly in the kind of value-free behavior modification people were disturbed by when B. F. Skinner originally touted it.

What makes Zuboff particularly indignant is that this is not the kind of capitalism where benefits and risks are shared. These companies not only see the workings of a hand that is invisible to us, they guide it for their benefit and, in so doing, control us in what she calls “a coup from above.” Apparently she originally titled the book Master or Slave? – you can see the planned cover displayed in the Worldcat library record which grabbed the pre-publication image and didn’t update it. It sounds like a lost Ayn Rand novel, and that’s what brings me to my reservations.

It’s not just that the book is repetitive and too emotively indignant (this is a case where the old saw “show, don’t tell” might have been good editorial advice), it’s the fundamental argument that I can’t entirely buy. First, I’m not as convinced as she appears to be that capitalism before what she astutely calls the “neoliberal source code” of surveillance capitalism was so wonderfully balanced and just, that if we just had the right restore point we’d be fine.

Second, and more importantly, this week has demonstrated how little control these platforms actually have over their rendered data-subjects. YouTube, Facebook, and other internet platforms were so thoroughly manipulated by a white supremacist terrorist that the companies were unable to stop the spread of a hateful message (and damage to their reputations). They gave a killer and his online wolf pack the tools, then couldn’t stop his message from getting out.

The story at the moment isn’t that we’ve had a coup from above, it’s that we’ve allowed reckless corporations to monetize speech with very few limits, algorithmically amplifying voices shouting “fire” on a crowded planet and making plenty of money doing it. We’ve allowed these surveillance capitalists to carry out endless experiments on all of us to perfect the tools of persuasion without insisting they simultaneously understand and contain the risks. The trouble isn’t just that they want to control us, but that they are unwilling to take responsibility and instead use their billions to fend off regulation while continuing feckless experimentation. They may aspire to total control, but meanwhile their control is dangerously shambolic and criminally careless.

Zuboff concludes “if democracy is to be replenished in the coming decades, it is up to us to rekindle the sense of outrage and loss over what is being taken from us . . . the human expectation of sovereignty over one’s own life and authorship of one’s experience” (521). We certainly should heed her warning, but as chilling as the idea of being controlled by giant corporations is, the immediate problem is demanding they figure out how to deal with lawless behavior they’ve encouraged. We must find the civic will and means to insist they give a damn about what happens when their powerful tools of persuasion can be used indiscriminately by anyone who masters their tools, whether state actors, corporate owners, home-made YouTube stars, or violent extremists bent on turning mass murder into mass spectacle.