Ingrid Burrington is an artist and tech writer who grew curious about the strange hieroglyphics scrawled on sidewalks and decided to decode them. Thanks to her, I now can look at the spray-painted squiggles that recently appeared in my alley and know what they are telling me. Underneath that battered asphalt packets of information are flowing from one point to another, and a particular company owns the conduit that carries them. 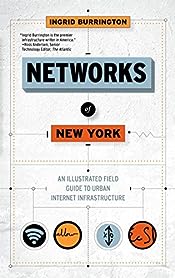 Networks of New York: An Illustrated Field Guide to Urban Internet Infrastructure is a handy little book just published by Melville House that shares some of what Burrington has learned about the physicality of the internet simply by walking through the city and paying attention to what’s going on underground, at the surface, and over our heads. “In the span of about three city blocks,” she writes, “I can usually figure out where there’s buried fiber optic cable (and sometimes who owns the cable), which devices hanging above traffic intersections are talking to one another, how many cell towers are in the area, and whether I’m currently under surveillance.” Though she specifically writes about New York, what she explains can help you do the same in other cities.

Two things about this book fascinated me – first, how little most of us know about how this system we all depend on actually works, and second, how much work goes on behind the scenes. Hooking all these bits together so bits can be sent from place to place depends on digging trenches, pulling wire, erecting antennas, and mapping all of this new infrastructure to the urban past. Some of the optic fiber we rely on today travels through ducts that once carried telegraph wires. Some of that history can be read on manhole covers. Some is in buildings built for telegraph systems that now are home to hundreds of thousands of miles of fiber optic cable. The networks we depend on daily “inherit the legacies of past networks in the same way they inherit landscape.” As Burrington puts it

The landscapes of the Internet are folded into the landscapes of everyday life. We basically live inside a really big computer . . . What we think of as personal computers today are just bits of aggregated hardware in a much larger, more complicated computer that is the Internet. But living inside a computer doesn’t look like a cool science fiction movie or any of the stock images used to describe the Internet. It looks like cities, highways, buildings, and the infrastructure that supports them.

I feel a little more aware of that living architecture by using this field guide, but I’m also more aware of how tangled the corporate and government interests are within this vast computer. Telecom companies have vanished, but their veins and arteries live on under the streets, carrying traffic for new companies and offices. Some of the above-the-ground equipment on lampposts now conveys information to make cities “smart.” LED lights can read how busy an intersection is and monitor weather – and soon will also be able listen for gunshots, once they fold in Shot Spotter technology. Those handy gadgets you may have in your car to automatically pay tolls are also following you through cities that have mounted readers over intersections to monitor traffic – and probably other things; a New York ACLU freedom of information act request located these readers, but did not uncover how that data gathered is stored and who can use it.

Quite a lot of the tangled corporate-government infrastructure has grown out of the billions of dollars spent to prevent another 9/11 attack. The NYPD has mounted surveillance cameras around the city, some marked and others unmarked, and so have private businesses, some of which feed information directly in the Domain Awareness System, a counterrorism program built by Microsoft that is rolling it out to other cities. The NYPD mounted cameras on squad cars to take pictures of car license plates to capture information about where vehicles were at different times, something federal agencies were also doing. Now that work is being done for New York and many other cities by a company called Vigilant Solutions, which has gathered over two billion records of where cars have been based on automated license plate readers. That data is combined with other data, including facial recognition, for law enforcement to use for a hefty price.

A lot of our communications infrastructure is keeping an eye on us, but it’s a one-way mirror. Companies that gather this data can license access to it to governments while keeping everything about their systems invisible to the public through non-disclosure clauses. When police have used cell phone tower simulators purchased with Homeland Security funding, product secrecy is so paramount prosecutors have sometimes had to drop cases against criminals to avoid the public learning about the technology through discovery or a trial. This is how things work these days.

It’s a very small book, but it has expanded my understanding of the actual stuff that connects us – the cables underground, the antennas that sprout on tops of buildings, the gadgetry at intersections that measures traffic and weather and who is going where. Now, when I see colored paint scribbles on the pavement, I’ll have an idea what they mean. I’ll also be looking up to wonder about who’s looking down at me.