Surveillance Valley: The Secret Military History of the Internet by Yasha Levine

If knowledge is power, then certainly the secret and unlimited acquisition of the most detailed knowledge about the most intimate aspects of a person’s thoughts and actions conveys extraordinary power over that person’s life and reputation to the snooper who possesses the highly personal information. And by vastly expanding the range and power of the snooper’s eyes, ears and brains, the new technology facilitates and magnifies the acquisition and use of such information. Moreover, as long as surveillance technology remains unregulated and continues to grow at an accelerating rate, the free and enriching exercise of the rights guaranteed by the Constitution and the Bill of Rights will inevitably be chilled to the point of immobility by the general awareness that Big Brother commands the tools of omniscience.

John V. Tunney, preface to Surveillance Technology, a staff report of the Subcommittee on Constitutional Rights of the Committee of the Judiciary, US Senate, 1976.

There was a time when people were skittish about computer networks and their capacity to be used for social control. I remember back in the late 1980s when our local public library cooperative adopted an online catalog citizens at a public meeting voiced concerns about the government keeping a record of what they had read. Library officials reassured them records wouldn’t be retained once books were returned, but the fact that information was computerized by a government office was worrying. That feels a little quaint, now that our location is known by companies we never heard of, our faces can be picked out in a crowd and matched to our identity, and piles of data about us are being analyzed to sell us shoes or a political candidate or to determine whether we should get a job or a loan. As for bringing those voice-activated microphones into our homes so we can have the convenience of asking aloud to have a song played . . . I can’t even.

What Google and Facebook know spills over into what the state knows about us, even at the local level. Local police scour social media and contract with companies that track our cars through license plate recognition systems and provide facial recognition services. On a grander scale, Edward Snowden’s 2013 revelations showed our intelligence agencies have access to pretty much whatever they want from companies that make a public show of resisting the Man while holding profitable government contracts. Though employees are beginning to balk at writing code for military applications, we seem to have mostly forgotten about how much spillage there is between our search and social habits and the intelligence community. 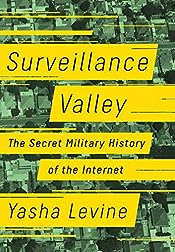 The relationship is complicated, and it always has been. I just finished Yasha Levine’s fascinating Surveillance Valley: The Secret Military History of the Internet, a journalistic account of the origins of the networked world we’re living in. (The footnotes are a treasure trove.) The supposedly free-wheeling, freedom-loving internet started as a military project opposed by student protestors during the Vietnam war, for good reason. In addition to using computers to analyze data to support counterinsurgency in southeast Asia, the Defense Department used their systems to monitor dissent at home. In the post-Watergate era, domestic surveillance was reined in, temporarily, as Congress held hearings and wrote reports and people read things like a 1967 cover story in The Atlantic. For a little while we were shocked, and we pushed back.

That’s worth remembering. Maybe I’m overly optimistic, but it feels as if general disgust with the tech companies that scoop up so much of our lives may have reached a tipping point leading to new legislation to restore some balance and rein in what tech companies can do. If we don’t do something, we really have given far too much power to the snoopers – and surrendered too much of our freedom.