Antisocial Media: How Facebook Disconnects Us and Undermines Democracy by Siva Vaidhyanathan

Facebook has been in the news a lot, lately. It’s getting flack for apparently violating a 2011 consent decree with the FTC by sharing data with device makers, including Chinese firms, one of which our intelligence agencies considers dangerous. After denying for years they’re in the content business, they’re funding original news programs to be created by news networks as their latest approach to fixing the problems of disinformation going viral on their platform. And now they’re partnering with community colleges to train students in “digital literacy” – or rather, in how to use social media in marketing campaigns. (It would be more honest to call this “digital marketing” but it’s an indicator that Facebook is practically synonymous with the internet in much of the world, just as being online has become synonymous with marketing.) 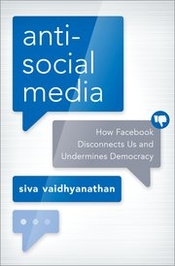 As it happens, I just finished reading Siva Vaidhyanathan’s new book, Anti-Social Media: How Facebook Disconnects Us and Undermines Democracy (Oxford UP). It wasn’t supposed to be out this soon, but the brouhaha over Cambridge Analytica accelerated the publication date. It’s compelling and couldn’t be more timely. Vaidhyanathan, whose previous book was The Googlization of Everything (and Why We Should Worry), believes Mark Zuckerberg is entirely sincere when he says he wants to bring the world closer together, that he simply has no concept of history, sociology, or any of the things he might have learned in school had he been paying attention – or if he had less of a sense of naïve but godlike hubris. In a letter Zuckerberg wrote to shareholders, sharing creates a “more open culture and leads to a better understanding of the world” with absolutely no inkling of how people might use its unprecedented ability to micro-target messages for mischief. “If Zuckerberg were more committed to naked growth and less blinded by hubris,” Vaidhyanathan writes, “he might have thought differently about building out an ungovernable global system that is so easily hijacked. Facebook’s leaders, and Silicon Valley leaders in general, have invited this untenable condition by believing too firmly in their own omnipotence and benevolence” (p. 4). Facebook does indeed connect the world, but it works by encouraging “engagement” and that means the most emotionally charged messages will get the most traction.

After framing the problem in his introduction, Vaidhyanathan describes features (or bugs) of Facebook in chapters that focus on how the Facebook machine operates on us in terms of pleasure, surveillance, attention, protest, politics, and disinformation. The problem with Facebook isn’t going to be solved easily, because its fundamental design and its unprecedented reach work against thoughtful democratic deliberation. “If you wanted to build a machine that would distribute propaganda to millions of people, distract them from important issues, energize hatred and bigotry, erode social trust, undermine journalism, foster doubts about science, and engage in massive surveillance all at once, you would make something a lot like Facebook” (19).

For me the most fascinating parts of this book had to do with the ways Facebook has worked with political campaigns and the ways right wing movements deployed Facebook among other social networks to promote fringe agendas. To Facebook, political campaigns are just another marketing challenge: how to sell a candidate by capturing attention and tailoring messages to individuals. Who needs Cambridge Analytica when Facebook can do even more to target and persuade? Who needs a party platform when you can whisper different messages in voters’ ears, ones designed around their personal interests and tastes and inaudible to everyone else? The Clinton campaign had Facebook consultants but relied more on their own in-house strategists and traditional messaging channels. The Trump campaign used Facebook much more effectively. “By timbre, temperament, and sheer force of personality, Donald Trump is the ideal manifestation of Facebook culture . . . After a decade of deep and constant engagement with Facebook, Americans have been conditioned to experience the world Trump style. It’s almost as if Trump were designed for Facebook and Facebook were designed for him. Facebook helped make America ready for Trump” (p. 174).

So too did white supremacist groups that used more obscure channels to plan their assault on the public sphere, testing out various messages and memes before launching them on YouTube, Twitter, and Facebook. As those messages spread, mainstream media begin to report on them, and Facebook in turn amplified those stories. Instead of connecting us, Facebook, which values all content in units of “engagement” rather than importance or truth, rewards those who interact with one another the most, solidifying our insular affinity groups.

We’ve seen how polarized our politics have become, but what many Americans fail to grasp is how influential Facebook is abroad. The campaigns that elected Modi in India and Duterte in the Philippines were coached by Facebook employees. In Cambodia, the dictator Hun Sen uses Facebook “Free Basics” (a freemium model of internet access – free use of Facebook, a paid option for anything else) to solidify his rule and attack opponents. In Myanmar, a country which had virtually no institutions to disseminate information other than the rumor mill, the arrival of “Free Basics” fueled a genocidal attack on a minority group. “Facebook allows authoritarian leaders and nationalist movements to whip up sentiment and organize violence against enemies real and imagined. It’s like nothing before . . . Facebook does not favor hatred. But hatred favors Facebook” (195).

Vaidhyanathan does have some solutions in mind, but they are not the simple tweaks Facebook proposes. There’s no way at this point to reengineer a platform that rewards hasty, emotional, shallow engagement or moderates content to ensure two billion people behave themselves. We need to support institutions that generate knowledge and develop publicly-funded forums for discussion and deliberation. We need government interventions (hard to imagine at the moment, but not without historical precedent). We need to work across borders to make these steps multinational if not global. And we need to do it soon. The lamps are going out all over Europe again, and far beyond.

Vaidhyanathan points to some hopeful signs, but concludes “as anti-rational, authoritarian, nationalist movements gain strength, enabled by Facebook, the prospects for the necessary movements and deliberation get more remote every year. If we are going to take a global stand to resist the rising illiberal oligopoly and reform our information ecosystem, we must do it soon. It’s getting dark—quickly” (220).

Read it and weep – and then let’s get to work.