Students historically struggle with nomenclature—the naming of compounds and writing of formulas for compounds in Chemistry 100.  Chem 100, Chemistry and Society, is a one-semester, 4 credit course the meets general education requirements and typically has about 70% enrollment of elementary education/special education majors.  The class size has a maximum enrollment of 96 and typically the course runs close to capacity.

Students in my course regularly work in groups, so working in groups for the game is not out of the ordinary.  Groups also submit “homework” each class period.  Since the first game activity was about week six of the semester, these students were familiar with their group members and I did not spend time acclimating the students to group work.

For the binary compounds, I did a short “lecture” on the general concepts of nomenclature.  Students then worked in groups, rotating through the three-card game variations.  The game variations are based on the three different types of binary compounds we study in the course.  Each group of four students was given a set of cards with various ions listed.  Students followed a set of directions that helped them write the names of various chemical formulas.  This worked well for ionic compounds, but for molecular compounds, the game was modified to fit the established rules for naming these compounds 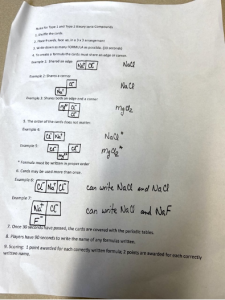 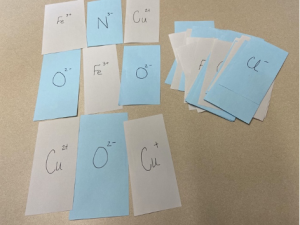 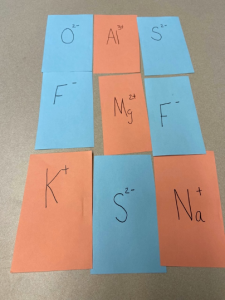 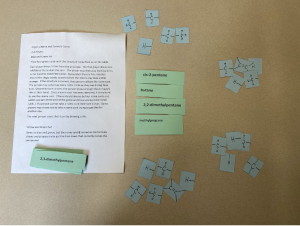 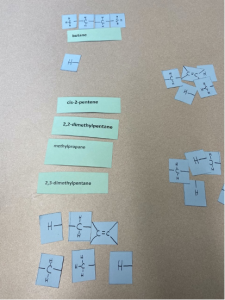 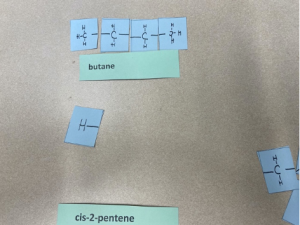 The outcome of the Game Experience

My observations of the days when the students played the games include high levels of student engagement as evidenced by lots of discussion about nomenclature, students utilizing the front desk and the floor, and forming groups in whatever manner worked for them; students asked for each variation as the class progressed.  Students commented that they enjoyed the game and that they learned to write names and formulas for compounds.

While instructions for each variation of the game were provided, the students were free to use the game in whatever manner worked best for them.  Some groups played the game using the rules as written, some groups modified the rules such as working as a group instead of as individuals on the game—more cooperative than competitive in nature.  The organic game was played about seven weeks after the first set of games, and students engaged quickly with the materials with little explanation needed.  Again, a high level of student engagement was observed, with lots of discussions, explaining, looking at notes for verification of answers, checking in with the instructor, and sharing among groups.

I continue to work on revising these games.  Student feedback included smaller-sized cards for the binary compounds.  Students had difficulty fitting the larger-sized cards on the limited desk area in one of the classrooms. I continue to use the nomenclature game and organic chemistry game in Chem 100 and expanded the use of these games into Chem 191—Chemistry Applications.  Chem 191 is for students majoring in civil, electrical, and mechanical engineering—a very different population than Chem 100.

Game Based and Adaptive Learning Strategies by Jeffrey R. Pribyl is licensed under a Creative Commons Attribution-NonCommercial 4.0 International License, except where otherwise noted.