Did you hear what one tortoise said to the other upon leaving the Ark?

Hurry up, everyone else is in Exodus!      Unknown

This study is foremost about numbers that I consider important for an understanding of the timeline in the Noah and the flood story in the ancient book of the Genesis.  Before I delve into these numbers I should first begin by filling in the character of the book itself.

Like most people, I first heard the stories of Noah, Abraham, Isaac, Jacob and Joseph as a child in Sunday school.  This early acquaintance led to an appreciation for literature in general, and in seeing the Bible as part of the world’s greatest literature.  Despite my enjoyment of the stories, I must admit that there are some problematic issues that the modern reader must grapple with and come to terms with before the numbers will make any sense at all.

One of these first problems is the character of God.  The later prophets would allow God to be completely transcendent from his creation.  Not so with Genesis.  Here God is viewed as anthromorphic.  This means that He exhibits human traits.  He has to come down to the earth to see what is going on among the humans, rather than having instant awareness of a situation.  This also implies that God must have eyes in order to see with, or there wouldn’t be much point in arriving upon the scene.  Moses grapples with God’s otherness but he doesn’t get quite all the way to where the prophets stand on things.

The second problem is whether God has a sense of humor or not.  While it is easy to poke fun at the stories, and to find many humorous things within them, it is not so simple a task to nail down  the serious dude who seems to be in charge of the creation from day one in the telling.  Put simple, the person of God really doesn’t seem to have all that much in common with the humans He created.  If we are all made in His image, then it would be logical to assume that He must be at least as funny as His creatures seem to be.  Although this seriousness might sound like a very simplistic explanation on my part, it is the how of literature that I am most intrigued by in grappling with the meanings behind the things we choose to believe in.

How we view the God of creation depends largely upon how we individually experience Him here and now.  If God seems merely humorous to me, then He surely must be the CLOWN PRINCE of creation.  This is not an image that most of us would like to share with the prime substance or divinity that indwells our being.  So we cater towards a God whose similitude is more of the pious, unambiguous, and Lord of heaven variety, and reject the petty, court jester opposite, because we come to realize in maturity that our own natures exhibit both a sense of orderliness and goodness.

The depiction of God in Genesis as a stern and judgmental deity who ultimately issues an immense flood to destroy the totality of the human race, except for a single righteous man and his family, is one of the most singular events in all of literature.  Nowhere does it say, as in the earlier creation myths, that a god was the guilty party for the fall due to an original mistake of giving procreative functions to mankind resulting in overpopulation and its dire effects.

This single God does not even assume a hint of responsibility for the free actions of His creatures who have commited the original sin of rebelling against His command not to eat of the forbidden fruit in the garden.  This is the cause of the spread of sin to all locations on the globe, which is passed on from generation to generation until sometime after the flood.  It seems the blame has been shifted away from the prime mover to a less prominent source in the story, but who turns out to be a much more interesting subject.  To further complicate matters God has chosen to rest on the 7th day of creation, inferring that some foreknowledge of the impending doom is implicit from the foundations of the world.  The somberness of the stated situation is unavoidable.

For me, the humor must be well hidden inside the story.  This is not the HA HA material such as you might have encountered in Greek mythology or Roman comedy.  In those psychological early stories and plays written on the gods, they are indeed laughable, but in the more subtle and disarming form of the human foibles we all encounter.

The punch line in Genesis is buried in the details, and these details were coded in the numbers.  Why would God choose a great flood to destroy a world that took only six days to make, and then take six times as long, as in forty days and forty nights of rain, to accomplish the deed of destroying it?  Something just doesn’t add up in the balance, if this story is taken literally.

I think that the problem for me is that we expect these stories to be taken wholly seriously, and when something does not seem entirely credible to the thinking mind, the pretext of seriousness is undermined.  At this point, the chances for identifying the humor are most assuredly present if we are receptive to it.

Into this drama steps Noah and the Ark to provide some possible explanations for the mess!

Listen to the story of the Great Flood as told in the book of Genesis and decide how many dimensions of time exist, or whether there be any limits at all.

We must begin with the birth of the righteous man named Noah who built an ark, and who knew time firsthand in order to gain our insights into its true and actual nature.

Regardless of the comic value, Genesis should be regarded as containing more scientific understandings of mathematical principles than we have been led to believe by those who say that the Bible contains a different kind of knowledge.

The fall of man is not the only problem in question.  The reason for the flood also involves fallen angels and the creation of a new race of giant beings called the Nephilim.  This mythological background should also be considered when weighing the tragedy of human being destroyed in a deluge.  The purpose for the flood as stated in the text is a different dilemma posed: How to eradicate the sinful Nephilim, and not necessarily to end the original creation of humans altogether which God had called good. 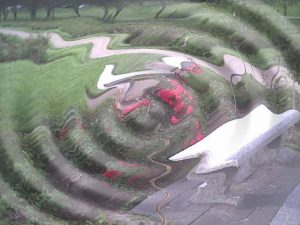 One Hell of a Flood!: Exploring 3D Math through Genesis Numberology Copyright © by deadletters. All Rights Reserved.