Vic was born in 1917. Betty was born in 1918. They grew up during the Great Depression. As you will learn, I believe this explains much of their character.

Judy and I bought Vic and Betty’s house in 1980. We were definitely the “new kids” on the block. As you know, most of Valley View’s families had lived there since the 1950s. Vic and Betty were lucky in that in the drawing for lots on Valley View Road in 1949, they got to select first. They picked Lot #4, the one with the most expansive view of the Minnesota River Valley. I am always thankful that they had first choice as I have admired this view for over 40 years. The house sits high enough on what was once one of the banks of the Glacial River Warren that no other building or tree has ever interrupted the view. We can even see the flashing light of the Hubbard Mill in Mankato 12 miles away at night.

Vic and Betty were also the first to begin building their home on Valley View Road. Vic began laying cement block for the basement in July 1950 and by December, the Gustafsons moved into their basement home. The next summer, Vic started to build the upper part of the house. He had the help of Betty, and their children, Jerry, Judy, and Jan, with no other assistance that I know of. Now, keep in mind that Vic was not a trained carpenter, but he managed to build the house by himself over a period of years. On his teacher’s salary, they could not afford a professional house builder. But he had the summers off and the motivation “to get the job done.” Valley View lore has it that when Vic was ready to install the wiring in the house he would roam St. Peter, looking at houses being built. He was a shy man by nature, but this did not hold him back from asking the electricians on the jobs how to do such and such wiring. The same was true with his methods of how to do plumbing.  Vic’s construction methods were unconventional to say the least, but he got the job done, to a certain extent. After the upper part of the house was finished and Vic and Betty and the kids moved upstairs, they rented the basement as an apartment. Kermit Swanson and his wife Jan were the first co-ed apartment renters. It was occupied for many years by guys from Vic’s swim teams. Arne Johnson, one of GAC’s champion swimmers, fondly remembers living there. He said that one of the highlights of the school year was the “swimming dinner” that Betty prepared for the team. It was like a Thanksgiving dinner topped off with pecan pie. Vic then showed slides of the year’s swim meets.

The basement also housed the future president of Gustavus, Jim Peterson. I first saw Jim on the night of his inauguration to the presidency in the men’s room across from the banquet rooms at Gustavus Memorial Union. He looked a bit stressed, so to try to calm him down, I made up a story of his year at Vic and Betty’s apartment. I said, “You know, Mr. President, I hesitate to mention this on such a festive occasion, but there is still a large hole in the bathroom wall of that apartment where I was told you once threw a beer bottle. Perhaps, to get your Presidency off to a good start, you could just give me a bit of compensation for repairing that hole?” His face turned a shade of red, and he said, ”We’ll talk about it some time.” Needless to say, my little story did not calm him down.

Kermit and Arne have confirmed my tales of Vic’s carpentry adventures. Kermit  says, “we got the impression that Vic built his house with a how-to-book in one hand and a limited budget in the other. Kitchen cabinets were unfaced, the bathroom door lacked a lock, and lifting the living room rug revealed that only the outside edge of the floor had been tiled. Vic figured that why tile everything when most of it was covered by a rug?” Arne told me that Vic’s house painting philosophy was similar. He said Vic told him, “Be sure to paint the front of the house first as one never knows when a good camping trip might pop up.”

The City of St. Peter put down a ten foot concrete entry from the street to Vic and Betty’s house. But Vic never extended it as a driveway to the garage. Part of the reason was that the garage was never used as a place for their car. They parked along the street and Vic used the garage and breezeway as a place to primarily store camping equipment. Indeed, was there a lot of equipment to store. Vic taught a camping class at Gustavus for many years. He was legendary as a camp guide and cook, particularly in the BWCA (Boundary Waters Canoe Area). Part of a student’s grade in his campus outdoor camping class was based upon the ability to prepare a tasty meal in “the wild” behind the president’s house on campus. I don’t think he flunked anyone for a bad meal, but you had to prove you could cook out. I had a conversation with a student from the 1970s who took Vic’s camping class. He said that in one class, Vic told them he had visited all the Minnesota State Parks and many of the country’s National Parks. He also said that he slept one night in a canoe in the BWCA. The student was so impressed that he went out in the woods behind campus and slept in a ditch overnight. 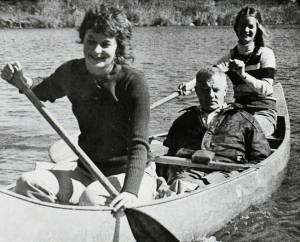 I believe Vic never threw a single piece of camping gear away. He must’ve thought it all might come in handy some day. Again, when I was shown the house for sale, the realtor ushered me through the breezeway and garage. Well, he showed me what he could of it. Camping gear was piled high from floor to ceiling and wall to wall. It hung down from the rafters. Much of it was Army Surplus stuff, such as canvas cots and backpacks, stoves and ovens, sleeping bags, old huge wooden skis, and, in particular, tents of all manner and sizes. Vic was not a big man, so there was just a winding narrow path that led to his workbench. I had to walk sideways. Vic and Betty had a Garage Sale before we moved into their house. I think it was to try and get rid of as much camping equipment as possible. I bought a pair of the old skis to nail onto the back of the garage as a memento to Vic’s camping collection. He evidently didn’t sell much of it. The next month I visited him at his “New Garage.” It was a former garage on campus that Vic converted into a storage shed for all the leftover camping supplies. In the back was also his office. I could barely get to the back to see him. You guessed it. In between the wall to wall, floor to ceiling camping equipment was a narrow walkway that I could barely navigate. Over the next several years, Vic changed his office over campus. I wonder what ever became of that camping equipment?

Not only did Vic teach camping but, as I said, he was a long-time physical education teacher and swimming coach at Gustavus. He coached swimming for 32 years from 1945 to 1977. In the process his teams won eight MIAC (Minnesota Intercollegiate Athletic Conference) titles. A few years ago, Arne Johnson and other members of his old swim teams got the swimming pool at Gustavus named the Vic Gustafson Pool. It has a hot tub and across from it hang all the MIAC winning banners. They won five titles in a row, 1955-1960.These were the years I was in high school, and when I look at them I think of how much Vic was accomplishing then. In 1973 he received the College Swimming Coaches Association of America’s Distinguished Coach Award. He was on the NCAA Swimming Rules Committee for ten years and was editor of the NCAA Swimming Guide for eight years.

Someone who has taught that long is bound to have affected a lot of people. Vic has his share of admirers. St. Olaf swimming coach Dave Hauch, a member of Vic’s outstanding swim teams in 1950-1953, calls him “the most influential person in my life.” Issac Monson writing an article about Vic’s 50 years at GAC, said that his grandfather was a classmate of Vic’s in the 1940s at Gustavus, His aunt took a January Term course in the 1970s with Vic and Biology Professor Bob Bellig, camping, hiking, and studying in the desert of Baja California. Arne Johnson says that his four years with Vic as a teacher and coach have stayed with him all his life.

Vic retired in 1982 at age 65, but he didn’t stop teaching. Because no one else wanted to, he continued to teach the canoeing, camping, and orienteering classes. He did this for another 13 years. He finally “put up his paddle,” so to speak, in 1995 at age 78 having taught continuously at Gustavus for 50 years and 100 semesters. This is a school record, similar to Chet Johnson’s, that will likely never be matched. 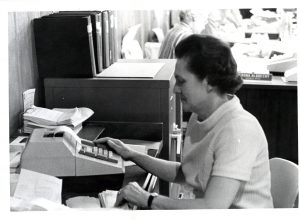 Betty was Vic’s right-hand (wo)man. Although quiet and in the background, she made the Gustafson house function. She was born May 23, 1918 in Minneapolis, Minnesota. She attended schools there. She married Vic in 1942 in New York City. They moved to St. Peter in 1945 when her husband began his coaching career at Gustavus. Like Marian Johnson, Betty was a long-time member at Trinity Lutheran Church. She was the Church Secretary and was involved in numerous other activities as a volunteer. Like many of the Valley View wives she worked for a time on campus at Audio Visual Services. But her claim to fame came in the Business Office. According Sandy Grochow,  one of her co-workers, she was efficient, friendly, dedicated, and “awesome.” She was the receptionist there for five years.

Betty devoted her life to helping Vic and raising their three children. She was his assistant in house construction. In the picture found in the introduction, Betty and the kids are shown handing up a piece of plywood to Vic. I know exactly where she was standing at that moment and it is a precarious drop of six feet. She worked as hard on building that house as Vic. Perhaps, as a present for her all her contributions, Vic made a sewing room for her.

Betty was the most diligent spouse helping with all the swimming students. She was a good cook. I mentioned before all those incredible annual “Swim Dinners” that she prepared. On trips to swim meets she made sandwiches by the hundreds, which were shared car by car. As Vic was admired by his swimmers, by all accounts Betty was their “Mom” away from home, cooking them countless meals. She and Vic, like Chet and Marian, formed quite the team.