In 1951, Ross and Lavinia got the 6th draw for lots in the neighborhood. They chose Lot #1. They moved into their completed “upstairs” house at 708 Valley View Road in 1953, after having lived in the basement like so many other families on the street. Although new trees were planted after the 1998 tornado, the house today looks essentially the same as when they lived in it; even the paint color remained the same until recently. The house sits on the far southeast corner of Valley View, bordered by 7th Street and South Elementary School. As a barrier to their “backyard” school playground, Valley View residents on the south side of the street planted a lilac hedge. According to Lavinia, the lilac bushes were found in an alley in town where someone had dumped them. The hedge is still there going on 65 years. I keep trimming and re-planting some of them at 744 Valley View. I admire their longevity. Their roots were strong enough to withstand the 1998 tornado that went through the neighborhood. Tall pines, elms, and maples went down, but not the lilacs. They were like many of the Valley View couples who transplanted themselves and took strong roots.

In her “Saga of Valley View” written for Chet and Marian’s book, Lavinia wrote, “Memories of early Valley View days include the place jumping with Cub Scouts. Then, there were the Bluebirds and Campfire Girls with our basement full of candy for the big candy sale.” As you can tell, both Ross and Lavinia were very involved in scouting. On January 17,1971, at a special recognition banquet at Mankato State College (now Minnesota State University, Mankato), Ross was presented with the Silver Beaver Award for his service to the Scouts. His scouting began in 1935 when he was 12 years old and he earned his Eagle Scout award in 1940. He served as scout leader for over 29 years. Lavinia had been a Campfire Girls leader.

Ross was born on April 29, 1923. He graduated from Willmar High School in 1941 and in the fall of that year he enrolled at Gustavus. In October 1942, he enlisted in the Navy. He attended Columbia University Midshipman School in New York City and on Sullivan’s Island in Maryland. During the war, he served in the South Pacific, Korea, and China. Upon his discharge, he re-entered Gustavus in 1946 to complete his degree. That same year he started his career in the Business Office at the college. When the Bloomquists moved to Valley View, Ross had already been working at the college for seven years.

Without any formal training in a business school (none that I can discern anyway) Ross became the principal custodian of GAC’s finances and investments. He remained in that capacity for 42 years. One of his “duties” according to Sandy Grochow, a long-time employee in the Business Office, was to attend all Gustavus Board of Trustee’s meetings to report on the financial health of the college. He grew to enjoy attending these Board meetings and developed a close rapport with several Board members. They respected his business decisions and, above all, trusted him. Other than the President of the College, Ross had the most influence with the Board of Trustees on the management of the College. Sandy said he worked day and night and on weekends to keep the “financial house” in order. And he approached this daunting task with good nature and a caring manner. He retired in 1988 as Vice President of Finance and Treasurer. 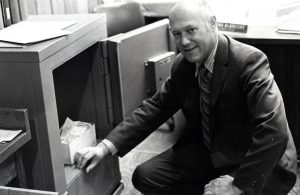 Ross served for many years on the Board of Directors at First National Bank in St. Peter He brought his business and investment savvy to this institution as well. Sandy remarked that one of Ross’ main goals both at Gustavus and at First National was to bridge the so-called “town-gown relationship.” Often, the interests of the city of St. Peter didn’t always mesh with those of Gustavus. Ross constantly tried to get these two sometime foes to work together for the benefit of both. This goal continued when he was President of the St. Peter Area Chamber of Commerce.

One of Ross’ qualities was his kindness to Gustavus students who were struggling with paying tuition and other school costs. He is legendary for making personal loans or outright cash gifts to students. “Pay me back sometime after you graduate,” was his approach. He would also help those incoming students who needed special arrangements to pay tuition. Dennis Smith was one of the many students who Ross helped. He said, “That (arranging a special tuition pay-back plan) is something he (Ross) could make happen, if he believed in you. He had a real passion for helping students finance their education.” Later, that student and Ross reunited when the now Rev. Smith became pastor at First Lutheran Church in St. Peter, where Ross was a member and church treasurer. As an aside, Ross was also kind to faculty who needed a bit of cash to get through the month. It is this exemplary kindness that Ross contributed to making Gustavus a special place in the minds of many.

Lavinia had a long working career as well. She graduated from Gustavus in 1948, then enrolled in the Nursing Program at Bethesda Hospital. She received her Master’s Degree in Nursing from Mankato State University in 1963. She was a long-time employee at Immanuel-St. Joseph’s Hospital in Mankato, Minnesota. She was in Staff Development as Patient Education Coordinator at the hospital. She also was as a teacher of Nursing both at Gustavus and at Mankato State University. She retired in 1985.

Meals on Wheels is one of the most valuable services that a community can provide to many of its senior citizens. It is a program whereby a hot meal is delivered to the residence of an elderly person, usually at lunch time. It insures that an older person often living alone can get at least one hot, nutritious meal a day. It was so helpful to my own mother, who got to the point in her life that she just didn’t want to cook. “Why go to the fuss and bother of cooking a meal just for one?” she would say. Many seniors feel this way but absolutely need that meal. To her credit, Lavinia started Meals on Wheels in St. Peter. She wanted to do this for the city and hundreds of seniors still today can thank her for it.

Ross and Lavinia were good friends with their Valley View neighbors across the street, Doniver and Gene Lund. Ross loved to play practical jokes. He had a good sense of humor. Gene Lund told me recently that one Christmas many years ago Ross evidently came over to their house at night and replaced a strand of her Christmas lights with one that blinked off and on. He knew that Gene, with her traditional holiday decorations, abhorred blinking lights (more on Gene’s Christmas decorating obsession later). Anyway, Ross called and said that there must be an electrical short in the lights and to be careful of fire. Gene immediately called an electrician in the middle of the night to check it out only to be told that nothing was wrong. She then knew the Santa prankster was Ross. He was always up to no good. She and Doniver later that night put a large flashing light near the Bloomquists’ house. She waited till midnight when she knew Ross and Lavinia would be asleep, then called. Gene told a sleepy Ross that there was a police car with a blinking light in front of their house. What was happening? “Be careful,” she said. The Bloomquists  looked out their front window and here was a blinking lantern in the street.

Now, let me tell you about the time Gene dove into the pool in her underwear. No, I think I should introduce you to Gene and Doniver first before getting into that story.