The first owners of Lot #12 at 731 Valley View Road were Charles and Margaret Dahlgren. They built their home in 1952 and lived there until 1960. Charlie taught engineering at Gustavus. I bet you didn’t know GAC ever had an engineering program. He also was the St. Peter City Engineer. They moved from Valley View to Grand Forks, North Dakota where Charlie became a faculty member at the University of North Dakota. It undoubtedly had a much bigger engineering program. Although the Dahlgrens did not live that long in the neighborhood, Charlie made a significant contribution. He engineered and supervised the construction of Valley View Road, its curb and gutter, and the installation of all the utilities. As Chet and Marian remarked, the job got promptly completed and all his neighbors had the peace of mind that comes from knowing “a job well done.”

Ellery and Aileen Peterson bought the Dahlgren house and lot in 1960. He had been teaching at Gustavus since 1955 and did not retire until 1991. Ellery was part of the “old guard” in the Department of Economics and Business on the first floor of the Social Science Building. He, Clair McRostie, Rufus Logan, Kyle Montague, and Ellis Jones built the department into one of the strongest at GAC. Ellery was the Accounting prof , but also taught Investments, Corporate Finance, and Federal Income Tax. However, teaching accounting was Ellery’s main job in the department. Clair McRostie, Kyle, Rufus Logan, and Ellis Jones each had their specialty area. As Ellis recently told me, “We just did our job of teaching our respective areas and didn’t discuss such esoteric topics as ‘where’ the department should be headed as far as curriculum, courses, increasing majors, etc., etc. Pretty sad,” he said. Maybe not? Like I said, the Economics and Business Department was one of the strongest at GAC thanks to the dedication of these professors. In addition, Ellery served the college as the acting Business Manager. He also served for a time as Director of Summer Programs.

For many years, Ellery had a business downtown primarily doing people’s income taxes. His office was located adjacent to the Flame Bar. This was convenient because after you found out from Ellery how much you had to pay in state and federal income tax, you could pop in for a drink, or two or more. You know what Ellery said was the correct tax amount. He was efficient, prompt, and above all, honest. I should know. He did our taxes for years. Thanks, Ellery, for your good work. I know he passed on these qualities to his many students. He retired from teaching in 1991. 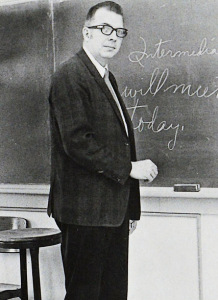 Ellery was the most civic-minded of all the profs of Valley View. He was elected and served on the City Council from 1968-1971. Later, when the city needed his emergency help, he served as mayor from 1992-1995. He also served many years on the St. Peter Community Development Corporation, as Director and Treasurer. He was the principal author by the Corporation to propose facilities in the St. Peter Industrial Park. He was past President of the St. Peter Area Chamber of Commerce and Rotary. He also served on a number of important city committees such as the St. Peter Area Ambulance Commission and the team to promote the new St. Peter Hospital, to name a few.

Above all, Ellery worked hard to get the city back on its feet, so to speak, after the devastating tornado that swept through a good part of the town in 1998. I think he had a stake in this as his old house on Valley View Road sustained some damage. But more so, it was of his love for St. Peter. Ellery was as dedicated as much to his town as to his college.

Aileen and Ellery were married for 48 years; most of that time on Valley View. She was born in Amery, Wisconsin and graduated from St. Croix Falls High School. She became a registered nurse in 1952 after receiving her degree from the Swedish Hospital School of Nursing. She  reached out to people who were ill or had a horrific event happen to them. When Ellery started teaching at Gustavus they moved to St. Peter where her attention primarily became her family. She and Ellery had five children.

Like many of her neighbors on Valley View, she was active in community affairs, such as Kiwanis. She was also a volunteer for the community health care facility at the Regional Treatment Center. But, it was at First Lutheran Church where she devoted her greatest “out of home” efforts. She served as its librarian for over 20 years. Again, like her neighbors she was involved with Gustavus, especially on the academic side where she worked on helping to create the

Curriculum II (now Three Crowns) program. This was an innovative alternative course of study that was geared more to a traditional integrated study in the classics, philosophy, and  moral issues.

After the loss of an infant son, Ellery and Aileen later adopted a little boy, whose name was Joel. He has written a very moving tribute to his two mothers, called, Dreams of My Mothers: A Story of Love Transcendent. I will leave it to the reader of this book to learn about the special mother Aileen was.

She passed away in July, 2000. Ellery later married Carol Hanson.