Excuse me, but what’s a Jefferson Avenue address doing in a book about The Bards of Valley View? Well, for your information, Ellis and the late Janet Jones lived across the street from the Lunds. They participated in the famous Block Parties and attended birthday and holiday celebrations with their friends on Valley View Road. Yet I found it interesting that in their book, Valley View: 1949-2004, Chet and Marian Johnson did not include the Jones. The reason, of course, was that, technically, they did not live on Valley View Road. In this book I want to make amends for this omission. Yes, officially Ellis and Janet did not have a Valley View address, but to my way of thinking they met the two other major criteria for inclusion in the neighborhood. They lived in their home for over 40 years and Ellis was a long-time member of the Gustavus faculty in the Department of Economics and Business.

Ellis received his undergraduate degree from Gustavus in 1952. I found it interesting that when he came to GAC as a first year student his advisor was Chet Johnson. Now, folks, Ellis graduated and taught for 30 years at Gustavus and Chet not only became his Valley View neighbor but, as I said, he was his undergraduate advisor. Ellis retired from teaching in 1988 while Chet was still the Lutheran Church Collection Archivist. This certainly reinforces once again Chet’s longevity. 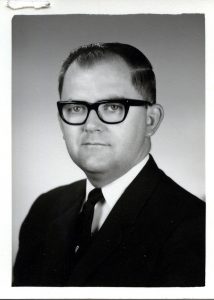 Ellis obtained his Master’s Degree from the University of Minnesota in 1955 and his Doctorate of Education degree from the University of North Dakota in 1965. He began his teaching career at Gustavus in 1958. Ellis advanced through the ranks of faculty to become a full professor in 1978 in the Department of Economics and Business. He also served in various administrative capacities at Gustavus for many years. He was the Part-time Administrative Assistant to the Dean of Academic Affairs, Assistant Dean of Academic Affairs, Associate Dean of the College, and Associate Director of Continuing Education. He was also the long-time Faculty Secretary, dutifully taking notes at all the sometimes raucous faculty meetings. Ellis ability to take notes in shorthand and the business-like order of his Faculty Minutes put him in good stead with the faculty and the Administration. When he stepped down from this post, he received a standing ovation for his many years of service. This is where I first got to know him.

The other place I occasionally came into contact with Ellis was on the Gustavus racquetball court. Ellis was a phenomenon. His short, stocky body belied a quickness he had for the ball. Add to this that he was a student of the game. He would park himself in the center of the court where he would execute finesse shots into the front corners that I usually found impossible to return. It also didn’t seem to work when I tried to lob the ball over his head. He was quick at getting to it off the back wall. I soon realized I was no match for him. Many much younger players were also lured into thinking, like me, that Ellis would be a push-over. How wrong we were. He was quite the competitor.

Ellis’s primary love at GAC, however, was always teaching. Keep in mind that when he began his career here, there was a serious demand for trained people going into the business world. There was a need for graduates who were educated in business procedures and office management. This group included managers, educators, and secretarial staff. Ellis filled this need in what was then the Department of Business and Economics. Notice that at the time “Business” appeared first in the Department’s title. He taught courses in Business Communication, Office Administration, and Information Processing. As part of his faculty duties he was an advisor to approximately 20 undergraduate majors a year. He was also supervisor for the department’s interns in office administration. He was also the advisor to the Epsilon Xi Chapter of Alpha Kappa Psi, the professional undergraduate business fraternity. From 1974-1976, he was a member of the Minnesota State Board of Teaching and served on the Ad Hoc review Committee for the Minnesota State Plan for Vocational Education.

I think, however, of all his business teaching activities, he was most proud of the Church Secretaries Conferences and Seminars he organized. These summer conferences and seminars drew as many as 300 participants from all over the country to the Gustavus campus. In early 1980, the Division for Life and Mission in the Congregation of the American Lutheran Church, contacted Lutheran college faculties to ascertain interest in providing continuing education opportunities for church staff workers. Ellis responded with a proposal for a Church Secretaries Workshop to be held at Gustavus. The goals of the workshop were centered on providing an opportunity to participate in a meeting specifically focused on church secretaries responsibilities; providing access to up-to-date information of interest in their work; and providing a reinforcement of church secretaries’ commitment to excellence in his or her work. The first workshop drew over 160 secretaries and was very well received by the participants. This success prompted a succession of similar workshops from 1981-1997. My wife, Judy, helped Ellis coordinate these workshops and occasionally I would pick up participants at the airport flying in from all over the United States. I got an insight into how incredibly organized Ellis was in these endeavors. Nothing was left to chance; every detail was checked. And all of this was done without any course release or time off from his regular teaching duties at Gustavus.

And it was not just at Gustavus and the State level that Ellis was involved with the Business community. On the national level, he was appointed the Executive Director/Secretary of Delta Pi Epsilon, the National Honorary Professional Graduate Society in Business Education. In this position, he was responsible for the overall operation of the organization. The national office was in the basement of Ellis and Janet’s home on Jefferson Avenue. Ellis would tell inquiries that to get to the national office go to the back door of the white house at 628 Jefferson, turn left at the refrigerator and then walk down the steps. He was the Executive Director of Delta Pi Epsilon for 22 years. Ellis was also instrumental in establishing the Delta Pi Epsilon Research Foundation and was an ex officio member from 1977-1987.

The daily management and functioning of this National office, however, was the job of Janet Jones. She was the Office Manager. She and Ellis had met in graduate school at the University of Minnesota. Both were working on degrees in Business Administration. Ellis was on the GI Bill after serving for two years in the Korean War. Janet was his classmate in the shorthand course. Here she was known as the “Whiz” for her ability to take notes. She was so fast and accurate that the instructor told her he could not talk any faster and that she had already exceeded the top speed on the short hand competency test. She won a job at Dayton’s hands down (no pun intended) in their Correspondence Bureau where she did proofreading, clerical work and, naturally, took shorthand at meetings. As I said, these skills made her the Office Manager of their home national business office, supervising the work of five women employees, including their neighbor Marlys Slarks. At one time, Janet was serving the requests of over 9,700 Delta Pi Epsilon members. After Ellis retired from the Executive Director’s position she worked at the Gustavus Library and at a law office downtown in St. Peter. (Based on an interview with Ellis on Oct. 10, 2014.) 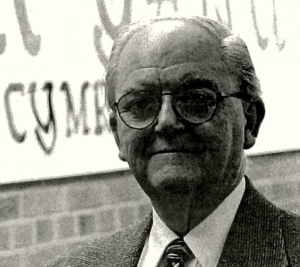 There was another endeavor where Ellis and Janet served a national clientele. Ellis was unabashedly proud of his Welsh heritage. Over the years through osmosis, as he called it, he converted Janet’s Scandinavian heritage into “partial” Welsh. She then had dual heritages. Not to be diminished by his active involvement in national business organizations, Ellis was equally involved at the national and state levels with Welsh Heritage organizations. He was the president and longtime editor of the Minnesota Welsh Association. In 1987, he was elected to the Welsh North American Association (the national association) Board of Trustees, serving later as vice president, then in 1992, as its president. He served as Executive Director of the Welsh National Gymanfa Ganu Association (WNGGA) and retired in 2003. In 2004, he was the recipient of the prestigious Welsh Heritage Award Medallion. The announcement read, “We are pleased to honor this outstanding Welsh-American, who has made significant contributions to Welsh culture in America for over 40 years.” I should add that during this time, Ellis had the WNGGA international headquarters, which provided support for members, officers, and committees, moved to St. Peter. Of, course, Janet again became the chief manager of this office.

To combine his love for Gustavus and his love of his Welsh Heritage, Ellis organized St. David’s Day on campus. On that day, the college’s normally rich Swedish-American heritage gave way to the Welsh. A morning Gymanfa Ganu hymn sing was held in the college Chapel. With the aid of a Welsh guest conductor, one of the Gustavus Student Choirs practiced singing Welsh hymns, both in English and in Welsh. The Chapel was often packed with guests and students and Welsh hymns echoed across campus. This mini Gymanfa Ganu was followed by a reception serving Welsh cakes, no less, and a speaker talking about Wales. It was a grand event and ended for all intents and purposes when Ellis retired.

I miss that mini Gymanfa Ganu and when St. David’s Day rolls around every year, I think of all the contributions that Janet and Ellis made to Gustavus and Welsh Heritage.