Many of you will remember Gene Lund with her nursing partner, Mary Richter, as the long-time nurses in the Gustavus Health Service. Gene took a personal interest in each student who came into their office in the basement of the now-demolished Johnson Hall. She received her RN Degree from Bethesda Lutheran Hospital in St. Paul, Minnesota. She did additional training in operating room procedures and supervisory responsibilities through the CADET program. Prior to her long career at Gustavus, Gene worked at the Community Hospital in St. Peter and the Oaklawn Nursing Home. She was a member of the North Central College Health Association and a volunteer for the Red Cross Blood Mobile. Seeing to everyone’s health is Gene’s calling. I should know. She still is concerned about  my weight, blood pressure, and exercise.

Like her friends Bea and Floyd Martinison, Gene and Don began their life at Gustavus in 1946 as Head Residents in Johnson Hall. Don had started teaching here that year. Gene wrote that Johnson Hall was largely filled with returning G.I.s and the dorm was in a rather primitive condition. It was not much of a problem for all of those guys but, for a young family, the dorm apartment left something to be desired. In particular, it lacked a bath tub. The Lunds made do by stuffing the shower drain with rags to plug it up and then managed to get a few inches water in which to take a makeshift bath.

After acquiring Lot #11, Gene and Don moved into their new house in August of 1953. Like other Valley View Bards, they did some work on the house themselves to save money. This included painting and varnishing the woodwork. Of all the things in the new house, their kids loved the new bathtub. This “modern” convenience was not without its troubles, however. In digging the bathroom drain, it was discovered that the house sat on top of a natural spring, which caused occasional flooding after a heavy rainstorm. Gene still faces this predicament after all these years. Just this past June, after numerous rainstorms, the basement flooded. The spring comes from artesian sub-strata rock and keeps flowing no matter what. There is no way to completely stop it. This causes Gene much anguish, as she takes great pride in keeping her house immaculate on both the inside and outside. This penchant for a beautiful home, as well as those of welcoming guests and generosity characterize Gene.

Although the years have slowed her down a bit, one can generally find Gene working in her yard. She is not a “morning person,” but the afternoons and evenings can often find her outdoors. She has spent countless hours landscaping with the use of a variety of trees, shrubs, and flowers. But what takes the landscaping award in her mind are all the “extra” features that sets the home apart on Valley View. The front yard has bird feeders, birdbaths, little wheel barrows, and a small bridge over a tiny stream. It is probably over the spring. She has just added a large arbor with a white fence as an entrance to the east side of the house.

The backyard is similarly filled with a cluster of trees and shrubs, another arbor, and a high privacy fence to the west. She waters the trees, shrubs, and grass faithfully. If there is one thing that annoys her greatly, it is the inability to get a full lush grass carpet everywhere in the yard. Even with the help of a lawn service and all its fertilizing, there is always a small barren patch without grass. She tries to contain her anger.

All this outdoor work is heightened even more when she puts up her Christmas displays. Her lights and decorations have made the pages of the St. Peter Herald. I wouldn’t say her decorations are overly garish, but let’s say they are comprehensive. The roof is lined with lights. There are lights on tiny trees to the entrance of the house. The shrubs alongside the house, front and back are lighted, as well as the stone planter and back porch and garage. There are outdoor Santas and sleighs, elves in the wheelbarrow, and lighted angels on the wing. And this is just the outside of the house.

Gene is famous for her elaborate indoor Christmas displays as well. She usually hosts a Block Party around the holidays to exhibit all her joyous work. It reminds me of a huge doll house. I’m afraid to walk through the living room thinking I will likely bump into miniature gingerbread houses, one of 50 dolls or a hundred little elves. I can’t begin to describe all the glitter and lights. She starts decorating right after Thanksgiving. She loves it and it’s not really work to her.This was and is her hobby. It was not Doniver’s.

Doniver (Don) Lund was a professor of history at Gustavus for 40 years. He began in 1946 and retired in 1986. Don was, to say the least, blessed with energy and ambition. He would have to be to keep up with Gene. In addition to his teaching at Gustavus, he also had sabbaticals where he was a visiting professor at Macalester College in St. Paul, Minnesota, Upsala College in East Orange, New Jersey, and Spring Hill College in Mobile, Alabama. He also taught some courses at the state universities in Mankato, Minnesota, Spearfish, South Dakota, and Boone, North Carolina. Don was energetic to say the least. 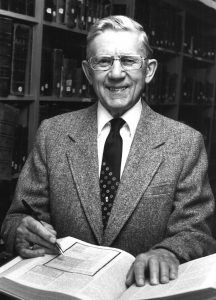 Don was born in the small town of Mead, Nebraska where he graduated from high school. He then attended Luther Junior College from 1936-38 before enrolling at Augustana College in Rock Island, Illinois. He completed his Bachelor’s degree there in 1940. He obtained his Master’s Degree from the University of Nebraska at Lincoln, Nebraska in 1944. He worked on his PhD there while teaching at Gustavus, eventually getting his doctorate in history in 1956.

He once told me that “you can make money by writing history.” His research skills in this vein were put to good use not only in his books about GAC, but in his centennial histories of the First National Bank in St. Peter, the Equitable Building and Loan of Grand Island, Nebraska, and First Federal and Twin City Federal of Minneapolis. He also served as a consultant and historian for Norwest Bank in Minneapolis, the Pillsbury Company in Minneapolis, and Hormel Foods in Austin, Minnesota. This is the area of research in history where Don excelled.

He also loved sports. Before coming to Gustavus, he was the Athletic Director at his alma mater, Luther Junior College. In Minnesota, he was a long-time high school basketball referee. One could always find Don and Gene, along with Kyle and Doris and Don and Marlys, at Gustie basketball games.

I recently talked to Gene about some of her memories of days past on Valley View. She said they always had “top notch” Gustavus students living in their basement apartment. She said they became like family. Like other Valley View residents, once the top floor of the house was finished, it was common to rent the former basement house to GAC students. She is sorry she did not keep a journal of the names of the student renters.

She also said that through the years she has had many calls about health problems. She feels good about having been of some help. Is their something in her life she would have done differently? Her reply was, “I wouldn’t change my life for anything. I helped to give Valley View a definite touch of heaven.” Notice she didn’t say anything about jumping into the pool in her underwear.