The series includes interviews with street food vendors. They explain the circumstances that led them to this job, describe their work routine, as well as the dishes they prepare, and they comment on their successes and difficulties. Along with food vendors, chefs and culinary journalists participate to explain the history of local dishes, and the influence that street food has on gastronomy today.

Street Food Latin America is the second season of the series and focuses on the following countries: Argentina, Brazil, Mexico, Peru, Colombia and Bolivia. The first season of the series was dedicated to Asian food (Street Food Asia) and followed the same structure and the same approach as the one dedicated to Latin America. Both are available on Netflix.

David Gelb and Brian McGinn created the documentary series Street Food. Listen to the interview, read the article  and answer the questions to know more about them and the series.

2.1. Why did they decide to do the Street Food series?

2.2. How did they prepare to shoot the episodes?

2.3. What message do David and Brian want to convey to viewers with the Street Food series?

2.4. What did they learn about the street food vendors who star in the series?

Here it is a list of local dishes featured in the series. Knowing them will help you to know more about what they talk about in each episode.

The series travels through different cities in Latin America in search of local street food. Your teacher will divide the class into groups and assign a city to each. As a group, complete the table below. Then, share your ideas with the rest of the class. Click the links on the map, and watch the episodes of the series to complete the assignment. 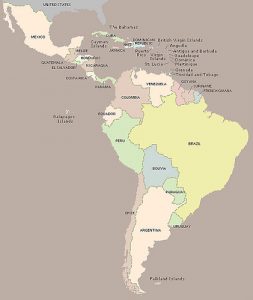 Each episode highlights a particular life story. These protagonist people are: Pato Rodríguez (Buenos Aires), dona Suzana (Salvador), doña Vale (Oaxaca), Tomás Matsufuji (Lima), Mamá Luz (Bogotá) y doña Emiliana (La Paz). Your teacher will create groups in class and will assign one of the names above to each group. As a group, complete the table and present your conclusions to the rest of the class.

After the group presentations, discuss the protagonist pattern in the series. Look at the common elements between the protagonists to identity that pattern.

Along with these main “characters,” the series features food experts and more street chefs. What do these people bring into the series? Do they have something in common with the protagonists? How are they different?

More than acting, people who participate in Food Street Latin America tell stories to the viewer. Although there is not a single and central narrative voice for the series, we can point to two groups of narrators. Fill out the table below according to what they tell the viewer:

a) What idea or view of the world is featured in this series? In other words, what values, beliefs, attitudes, and behaviors does this series emphasize? Which ones does it reject or ignore? Pay attention to the street vendors in the series and how all of them have been successful in their endeavors: what actions did they take to succeed? What values and principles guide their actions? On many occasions, they refer to these principles and values with a slogan or aphorism. Do you remember any of those slogans?

b) According to the series logic, all of the street food vendors have been successful. How is success defined in this series? That is, what does it mean to be successful according to the series? One of the protagonists, Toshi from the episode in Lima, compares himself to his father (owner of several upscale restaurants that made a lot of money) and defines himself as a “loser.” Is earning a lot of money a characteristic that defines the winners in this series? What about waking up at sunrise and going to bed late at night? Or the hours of physically consuming labor? Are there any other measures of success evident in the series?

c) Is luck a factor recognized in the series? According to the Diccionario de la Real Academia (Dictionary of the Royal Academy of the Spanish Language), luck is defined as “circumstance of an event being, by mere chance, favorable or adverse to someone or something” (italics are mine). That is, human action does not affect luck. The idea of luck does not seem to fit well with the argument in favor of human ability to control their future and make decisions in their lives that each episode features. How do you think luck was represented in the series?

d) Certain personal circumstances that are given to us have a great influence on our future life, such as genes, parent’s education level, physical appearance, etc. Are there personal circumstances recognized in the series? Are they considered when telling the lives of the protagonists? If so, from what perspective?

In the series we see perfect examples of jobs that satisfy a social need such as feeding and make the workers happy. Despite this, they are jobs that demand a lot of mental and physical effort and do not receive a high salary or recognition. On the other hand, the anthropologist David Graeber argues, that today there are numerous jobs that are not only unnecessary, but also make those who perform them unhappy because they do not see the purpose of their work. Graeber calls them bullshit jobs. Watch the animated video where Graeber explains what those bullshit jobs consist of and how we should incentivize other types of jobs, which are those that relate to what he calls, care jobs. These are in, for example, education, child rearing, healthcare and eldercare. Write a short essay responding to Graeber´s critique of the job market, as well as his idea to promote jobs that help and support people´s lives, rather than jobs that sustain the production of things.

Halligan, B. “The Creators of ‘Street Food’ on Why Stakes Are Higher Than ‘Chef´s Table’.” Food&Wine, 25 April 2019, www.foodandwine.com/news/netflix-street-food-creators-interview. 14 May 2021.

Culturas hispanas a través de la pantalla / Hispanic Cultures Through the Screen by Ana M. López-Aguilera is licensed under a Creative Commons Attribution-NonCommercial-ShareAlike 4.0 International License, except where otherwise noted.