Okay, this chapter heading is an example of clickbait: it’s a misleading headline. In reality, this chapter is about things reputable newspapers and other news sources routinely do in the course of business that you should be aware of as a critical news consumer. 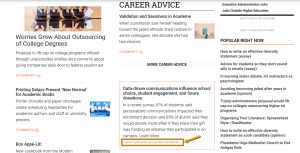 Note the boxed news item. It has a label – “content sponsored and provided by Ellucian.” It looks like a news story, but it’s advertising. Here’s an example from The New York Times. 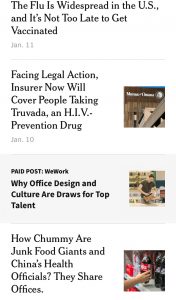 Here it’s labeled PAID POST – but if you weren’t paying attention, you might think it’s a news story because the layout is identical to the surrounding news stories. 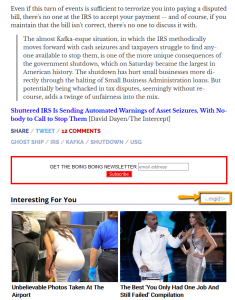 This example from BoingBoing makes advertising harder to identify. All of the links under “Interesting for You” are ads placed by a company that is only indicated by a logo that is barely visible. (Incidentally, this example illustrates another thing to bear in mind. BoingBoing mostly aggregates and summarizes news from other sources. In this case it’s a summary of a story published in The Intercept. You would want to “go upstream” to The Intercept before took BoingBoing’s word for it.)

The previous example is from a site that mostly digests stories found elsewhere. Another way news sources incorporate news from other sources is syndication. Material from one site is published on another site (or in a print newspaper). Two prominent news agencies that aren’t publications themselves but report news to be picked up by others are Reuters (headquartered in London) and The Associated Press or AP (headquartered in the New York).  Another syndicated source you will frequently encounter is Agence France Press, the world’s oldest news agency (headquartered in Paris). Additionally you might see in a local paper a story reprinted from The New York Times or The Los Angeles Times and many popular columnists are reprinted in multiple papers. Remember: it’s worth going upstream and at least noting the original source. The Mankato Free Press will run articles about events in Washington D.C., but they don’t have reporters working there. They syndicated that story from a news agency so Mankato residents will be informed.

In the following example, the source of this news story is not The New York Times, though it can be found on the Times’ website. 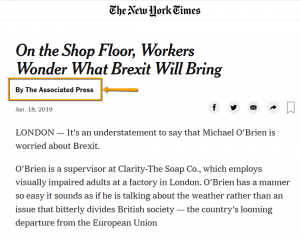 This can also cause confusion because AP stories stay on the Times’ site for a limited period of time. If someone is outraged by a Times story and then – what!? – it disappears, they might conclude something nefarious happened. Was it retracted? Was it censored? What’s going on?